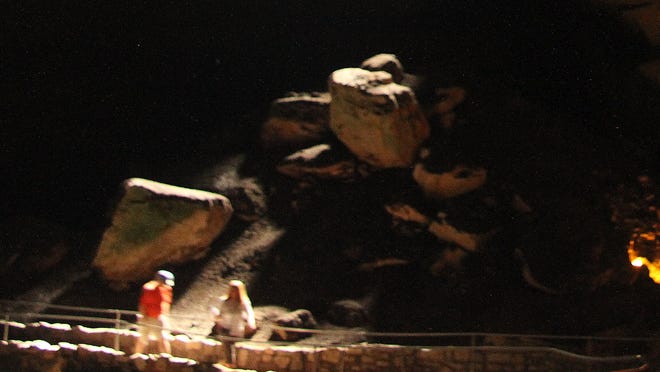 The caverns, which contain a complex system of underground caves, filter local groundwater sources and could be susceptible to contamination from industrial sources like orphaned wells.

A study conducted by the National Parks Conservation Association ranked Carlsbad Caverns as the national park or monument with the second-most nearby abandoned wells in New Mexico.

Azetc Ruins National Monument in northwest New Mexico was ranked second with 260 abandoned wells within 30 miles of its boundary, and Chaco Culture Historical Park in the same region was third with 44 wells.

Manhattan Project National Historical Park near Los Alamos was fourth with seven nearby orphaned wells and Valles Caldera National Preserve just north of Albuquerque was fifth with two wells, per the study.

More:Plugging oil and gas wells could create thousands of jobs, billion in wages for New Mexico

Aztec Ruins and Chaco Culture in the northwest San Juan Basin are in New Mexico’s other active but less production natural gas field known for one of the densest methane clouds every discovered hovering over the Four Corners region.

Nationwide, the study showed there were more than 30,000 orphaned wells within a 30-mile radius of national parks, which could bring pollution in the air and groundwater to the federal public lands.

America Fitzpatrick, energy program manager at the Association said the abandoned wells could harm public lands set aside for conservation while also worsening the impacts of climate change.

“It is shocking to learn how many orphaned oil and gas wells are leaking dangerous pollutants into the air and water, harming not only our national parks but also local communities,” Fitzpatrick said.

“This is an urgent problem that needs to be addressed by Congress to protect parks and public health, and prevent oil and gas companies from skipping town without cleaning up after themselves again in future.”

New Mexico’s congresspeople brought forth legislation in recent months to fund the clean up of abandoned wells and increase bonding payments companies make when establishing well sites to pay for the work when a well is abandoned.

In the U.S. Senate, Sen. Ben Ray Lujan (D-NM) introduced the the Revive Economic Growth and Reclaim Orphaned Wells (REGROW) Act to earmark $4.275 billion for well cleanup on state and private lands, $400 million on federal and Tribal lands and $32 million for research without adjusting bonding requirements.

But that bill did not address bonding requirements, which industry leaders argued should be left up to state regulators to consider their own individual needs.

U.S. Rep. Teresa Leger Fernandez (D-NM) appeared to signal the federal government must step in to raise bonding rates to prevent wells from becoming orphaned in the first place.

Those rates were duplicated in a bill from Democrat U.S. Sen. Michael Bennet of Colorado in a third bill introduced last week.

And President Joe Biden in both his 2022 budget proposal and recent infrastructure spending package called for billions of federal dollars to address abandoned wells across the country.

“It’s time we start holding oil and gas companies responsible for their mess,” Leger Fernandez said as her bill passed the House Natural Resources Committee in May. “The Orphaned Well Cleanup and Jobs Act will do just what it says – clean up the orphaned wells polluting our waters and air and create jobs in the communities that fueled the power and progress of America.”

Lujan said the REGROW Act, which saw industry and bipartisan support, could address the problem while also creating jobs with skills transferable from the oilfield and benefit workers impacted by the country’s ongoing transition away from carbon-based, fossil fuels.

“Communities in New Mexico and all across the country are suffering from harmful methane emissions that are released by thousands of orphaned oil and gas wells,” he said

“By passing this bipartisan legislation, Congress can help states create opportunities for oil and gas workers to get back to work while slashing harmful methane emissions.”

The fight to clean up New Mexico’s abandoned oil and gas wells could also be taken to court as Santa Fe-based environmental group WildEarth Guardians filed last week with the State Oil Conservation Division the group’s intent to sue about 350 oil and gas operators for alleged “inaction” in plugging wells per state regulations.

“For too long, oil and gas companies have saddled New Mexicans with the cost of abandoned wells and the risks of contamination,” said Daniel Timmons, Staff Attorney for WildEarth Guardians. “It’s time for the oil and gas industry to be held accountable for cleaning up its mess and we aim to drive that accountability.”

Records show 3,357 wells sit inactive in New Mexico without producing oil or gas in the last 15 months – mostly in the Permian and San Juan basins.

WildEarth Guardians argued that wells that are unproductive for 15 months must be shut in and the land remediated, and the state must do more to ensure compliance.

The notice also pointed to a recent study commissioned by the New Mexico State Land Office which found an $8.1 billion gap between the cost to clean up New Mexico’s wells and the actual funding the State had for the work.

“These non-producing oil and gas wells are yet another shocking example of how industry is not shouldering the true cost of doing business in New Mexico,” Jeremy Nichols, climate and energy program director at WildEarth Guardians.

“We have to stop subsidizing this dirty industry, we have to stop letting industry get away with leaving a legacy of pollution for future generations.”