REGION — In the race for the 38th State Senate District seat between Democrat Catherine Blakespear and Republican Matt Gunderson, the issue of abortion has taken center stage between, prompting both pro-choice candidates to ratchet up their rhetoric in the final weeks before Election Day.

In a television advertisement and in numerous mailers circulated to district voters, Blakespear has described herself as the “only pro-choice candidate” in the race, despite Gunderson’s stated position as a pro-choice Republican.

Conversely, in a video released via social media last week, Gunderson explicitly stated his support for preserving a woman’s right to choose and characterized his opponent as dishonest for misrepresenting his stance.

In comments made to The Coast News, Blakespear’s campaign manager Kevin Sabellico reiterated the accusation against the Republican, arguing that Gunderson was dishonestly trying to play both sides of the abortion issue in order to garner more votes.

“Matt Gunderson is anti-choice, and what’s worse, he’s lying to voters about his record,” Sabellico said. “He’s against Prop 1, which codifies the right to choose into the state Constitution. He’s endorsed by the California Pro-Life Council and Californians for Life, radical anti-choice groups who want to outlaw abortion in California. He refuses to denounce the Supreme Court’s decision to overturn Roe v. Wade, and he even said that insurance companies should be able to deny coverage for reproductive healthcare.

“Matt Gunderson cannot be pro-choice and simultaneously hold these extreme views,” Sabellico continued. “Through his words and deeds, he has made it clear that he will vote in lockstep with Republican senators to defund Planned Parenthood, criminalize abortion, and impose draconian restrictions on women seeking basic healthcare.” 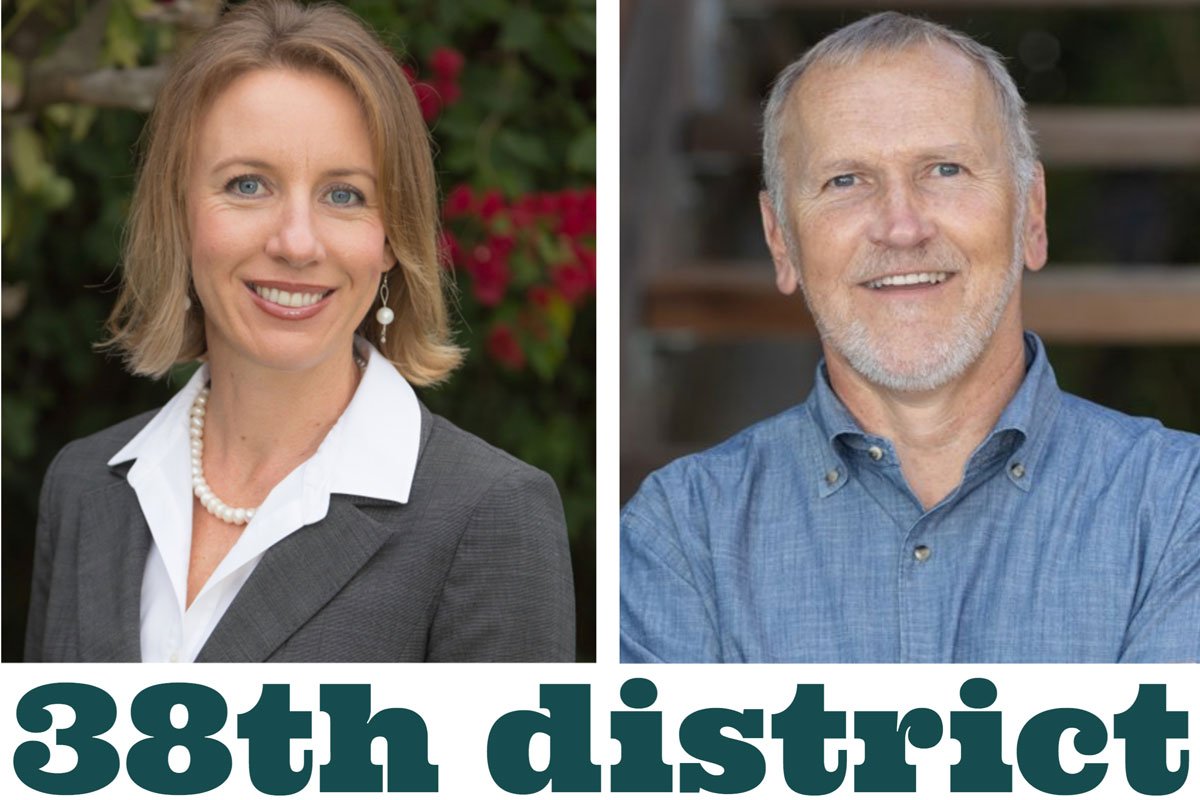 Gunderson fiercely denied the accusations and maintains that Blakespear is pivoting toward the abortion issue to distract from questions surrounding her own policy record both as mayor and SANDAG chairwoman.

“Matt is pro-choice and has been on the record as being pro-choice for decades,” said Duane Dichiara, Gunderson’s campaign spokesperson. “On the day of the Dobbs decision, Matt made the statement of being proud to live in a state that protects his four daughters right to choose. To say otherwise, as SANDAG Chairwoman Blakespear has is just another lie from her.”

“It’s no surprise that this issue is all that Blakespear wants to talk about. She has already been exposed as a non-transparent, inept, and corrupt politician. She can’t stand on her own record, so she thinks her only chance of winning is to lie about Matt Gunderson’s record on the issue of choice. Matt isn’t taking the bait. He’s focused on winning this race to make California a safer, more affordable place to live.”

Thad Kousser, a political scientist at UCSD, explained that Blakespear’s emphasis on the abortion issue is hardly surprising in the aftermath of the Supreme Court’s decision in Dobbs v. Jackson Women’s Health earlier this year overturning federal abortion protections under Roe vs. Wade, given the politically charged nature of the subject.

“Blakespear is just following the playbook nationally, it’s the issue [abortion] that voters care most about, second only to the economy,” Kousser said. “In California politics, this is more about an issue that speaks to candidates’ values than an issue actually up for grabs in policy. It’s not as if abortion rights likely to change in California, but it’s a way for candidates to say where they stand.”

Meanwhile, a growing cohort of local Democrats and community activists in Encinitas have issued written complaints to the California Democratic Party about Blakespear’s rhetoric about her opponent on the campaign trail.

Over the summer, Susan Turney, a lifelong Democrat registered as No Party Preference, helped start a group called “Democrats and Independents for Matt Gunderson.”

The group largely consists of supporters of former 38th District candidate Joe Kerr, a self-proclaimed moderate Democrat eliminated after the June primary, and also includes many local residents, such as Turney, long critical of Blakespear’s policy record as mayor.

The group accuses Blakespear of intentionally misleading voters about Gunderson’s position on the abortion issue as a ploy to win over left-leaning voters such as themselves.

“I have met him [Gunderson] on numerous occasions and he assured me and others that he’s always been pro-choice since the mid 1990s,” Turney said, a former candidate for Encinitas City Council who said her vote for Gunderson will be her first ever for a Republican candidate. “The fact that he is endorsed by groups that are pro-life and gets endorsement from pro-life groups is not necessarily because he’s pro-life, just like Blakespear gets money from developers because she supports developers but claims she’s not pro-development. I have no reservation about him being pro-life.”

Several members of the group said they were turned off from Blakespear after her campaign’s purportedly misleading rhetoric about Gunderson’s position on abortion.

“…(Gunderson’s) been pro-choice all his life and will protect reproductive choice in California,” wrote Sarah Lifton, another founding member of the grassroots group. “He is an environmentalist. He opposes assault weapons. He has long supported LGBTQ rights. And most significant for me, he is a staunch supporter of local zoning control…”

My brother Steve was the first openly gay Republican in the US Congress. The Log Cabin Republicans fight for equal rights for LGBTQ+ Americans and it’s inspiring to see how far their movement has come! 🏳️‍🌈

Sabellico questioned the authenticity of Turney’s statements based on her status as a NPP.

“Susan Turney is the chair of the so-called ‘Democrats for Gunderson,’ and she’s not even a Democrat,” Sabellico said. “The fact is Gunderson isn’t just a Republican, he’s an extreme Republican who supports Trump. No amount of letters from fake Democrats will change that.”

On the other side, the California Republican Party has targeted Blakespear’s record as a local officeholder, creating a website entitled “Corrupt Catherine” and featuring news articles from several San Diego-area media outlets highlighting various allegations made against the public official.

“Catherine Blakespear made Encinitas worse,” the GOP site reads. “Don’t let her ruin all of California, too.”

Voters have not been able to hear directly from both candidates — other than individual meet-and-greets — regarding these issues and allegations since there have been no public debates. This summer, Gunderson challenged his opponent to a series of debates in the weeks before November’s general election, but Blakespear declined.