Lujan Grisham, a frequent supporter of climate action and increased regulations to reduce human impacts, reported to the international community New Mexico’s progress in embarking on two separate rulemakings at the New Mexico Environment Department and the Energy, Minerals and Natural Resources Department aimed at cutting emissions from the oil and gas sector.

She said that while work was underway to reduce the environmental impact of fossil fuels – one the state’s main economic drivers – the energy industry would be part of New Mexico’s transition to a “low-carbon future.”

The Carlsbad Current-Argus sat down with Lujan Grisham for an interview from COP26 in Glasgow, Scotland to talk about her impressions of the global climate change efforts and its implications for New Mexicans.

After attending, do you feel there is potential for world leaders to be successful on addressing climate change?

“I think the potential is immense. It looks to me there are government leaders, worldwide leaders talking about policy and what we’re doing to meet the climate action goals.

“The audience is largely investors, banks and companies, businesses who are already squarely in the renewable space or are doing methane mitigation. I thought we were the only ones in our little bubble in New Mexico talking about turning methane into a fuel cell right on the spot.

“Everyone is talking about that and more innovations to come. They’re clear about our opportunities to get to carbon negative with carbon sequestration.”

What is the oil and gas industry’s role in achieving New Mexico’s and the world’s climate goals?

“When you talk about that, you’d don’t talk about as an us versus them, oil and gas as them and we have to move over here. They talk about the innovations and the investment potential and strategies for places just like the communities in the Permian Basin to be part of the solutions, the redundancies in those solutions while also helping us get to our climate action goals.

“While New Mexico is not the only state they point to, we are the only state that is dealing with methane in the way we are. The feds are saying they’re going to follow New Mexico’s lead. We got there because we had cooperation, innovation and support by the oil and gas industry.

“That’s gotta feel really good about New Mexico’s potential to do good, to do right and to diversify our economy using the resources that we have.”

More:Bad Energy: The Energy Transition Act was supposed to get New Mexico away from coal 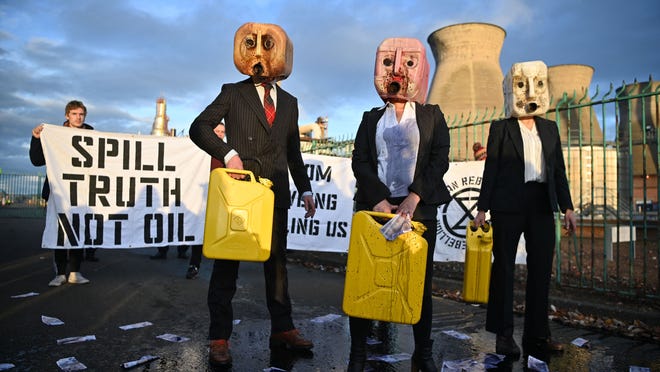 How do you respond to arguments that oil and gas production must cease in order to avoid global warming and consequences of pollution on our climate?

“We know we have people, policymakers and advocates that say just ‘That’s it. Leave it in the ground. We cannot use it. And if we do that, that all by itself will prevent the warming above the 1.5 degrees Celsius.’ Actually, that’s just not true.

“We’re still burning coal around the world. We’ve still got industries like the manufacturing of steel that are still very carbon-intensive. If you oversimplify then you’re just sort of picking sides without any solutions.

“In this conference, it’s about recognizing that fossil fuels are responsible for climate change but instead of pitting each other against each other, we’re going to use the private sector including oil and gas to come up with solutions that make a difference and make sense both economically and for saving the planet.

How do you balance the economics of oil and gas and energy production with the environmental concerns?

“It’s being achieved. We’re setting the road map and the infrastructure and as we start measuring our successes, how we’re tracking and monitoring methane which now the feds are going to do. If you don’t know what you’re taking out of the atmosphere or what you’re preventing from being released into the atmosphere, you don’t know how well you’re doing in that space while you’re moving to creating carbon-zero electricity.

“As you decarbonize, you still have to deal with the carbon footprint you have already released into the atmosphere and you’ve got to figure out what you do with other industries that are continuing to produce carbon. I do think New Mexico is showcasing there’s a road map.

“You can be effective and accountable and you can build an economy around renewable energy and around innovation tied to the current forms of producing energy. They’re going to look to energy states for that work.”

How will oil- and gas-producing communities those in the Permian Basin be supported during a transition away from fossil fuels?

“If you look at our first piece of legislation in 2019, the ETA (Energy Transition Act), we made sure were looking at compensation strategies for both the Navajo Nation, San Juan County and individual workers.

“As you figure out what the transition businesses or economic opportunities are going to shake out to be, well the same is true in Eddy and Lea county. That’s one of the reasons I agreed with the community to have a community college in Carlsbad. It’s one of the reasons we said we’ve got to reinvest in all roads infrastructure.

“We have to make sure we invest so that we have a community that has an opportunity to bring in other industries and businesses. And we need the current folks to be fully engaged with us on all of these new innovations.”