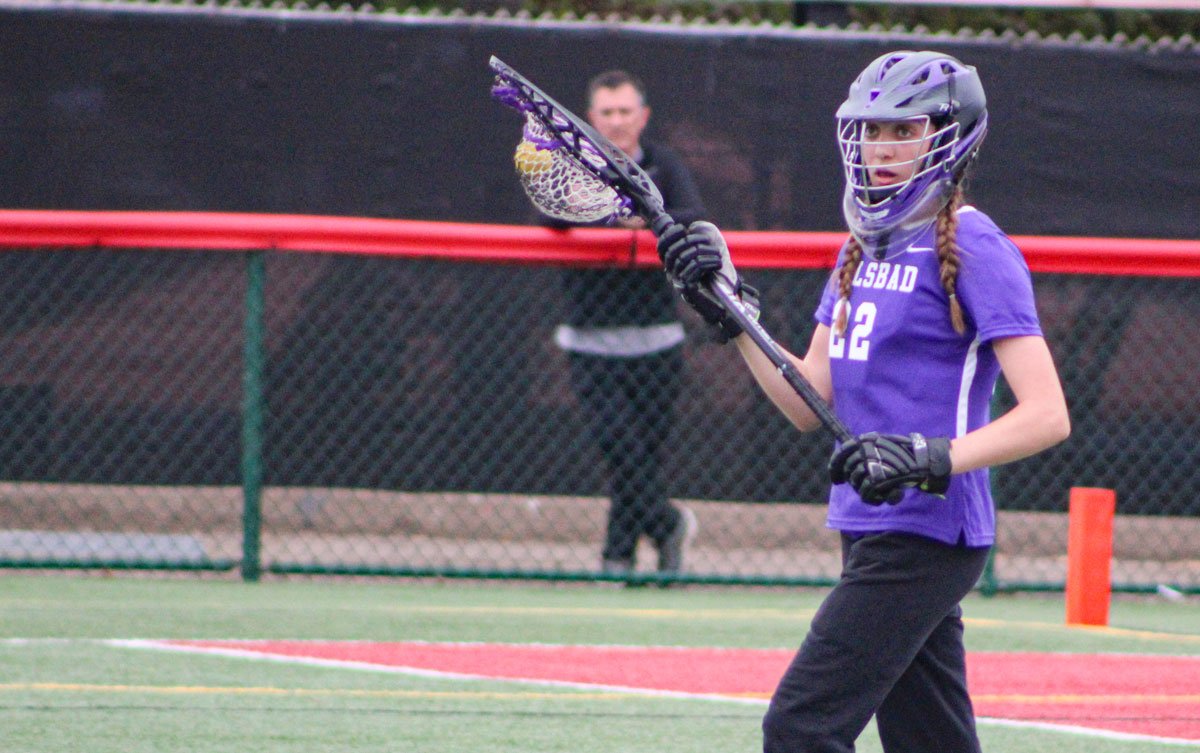 CARLSBAD — Lighting quick reflexes are a prerequisite for a lacrosse goalie.

It’s one of many reasons Carlsbad High School incoming senior Aubrie Avilla is one of the top girls’ lacrosse players in the county. Avilla capped a brilliant season in the net to help lead the Lancers to their first-ever CIF championship game appearance on June 5.

Although CHS lost, 16-5 to La Jolla Country Day, the program is trending upward and so is Avilla. In fact, the netminder is the Lancers’ first-ever girls lacrosse player to commit to a Division I college program, when she committed to Elon University (N.C.) in December 2020.

Avilla’s rise has been steady, but she’s always been drawn to her position since she first took up the sport in fifth grade. Initially, she started as a defenseman, but her club team kept rotating goalies until Avilla took up the job.

Admittedly, it was difficult for Avilla to break down her passion as a goalie, but she’s steadily improved under the tutelage of former CHS head coach Greg Schmidt, assistant coach Sam Donaldson, a former D-I player herself, and playing for the North Coast Storm club team.

As she ascended through the club ranks, Avilla’s game took form, and she earned the starting goalkeeping job as a freshman for the Lancers. In 2019, CHS struggled with a 9-13 record and was sitting at 2-3 last year before the pandemic hit and wiped out the season.

This year, the Lancers had an 11-11 record in the regular season finishing third in their league but caught fire in the CIF D2 playoffs. They scored a 16-6 win over University City and then an upset win over San Dieguito Academy, 9-8, where Avilla recorded 26 saves, a career-high, on 34 shots.

The Lancers then rolled past Santa Fe Christian, 15-8, before falling to La Jolla Country Day in the final. During warmups, Avilla injured her finger resulting in losing a fingernail but gutted out the game.

“It hurt, but I needed to pull through the game,” she said. “It affected my clearing a little bit.”

Prior to her breakout high school season, Avilla was already on the radar of several colleges. Campbell, Davidson and the University of Colorado at Colorado Springs were the first to reach out; however, Avilla emailed the coaching staff at Elon and she took an unofficial visit. Shortly after, she gave her verbal commitment, which is non-binding.

Avilla has always had her eye on playing in North Carolina, which is a hotbed of lacrosse talent. Elon, meanwhile, was ranked as high as No. 12 this year.

“It’s a great program and an amazing program,” Avilla said. “I’m really excited about that.”

On the academic side, Avilla has a full schedule as she is the vice president of the Feed Carlsbad Club, is on the ASB (student council), secretary for the American Sign Language Club and was her freshman and sophomore class president.

As for college, while still more than one year away, Avilla said her early plans are to major in psychology and possibly attend medical school.