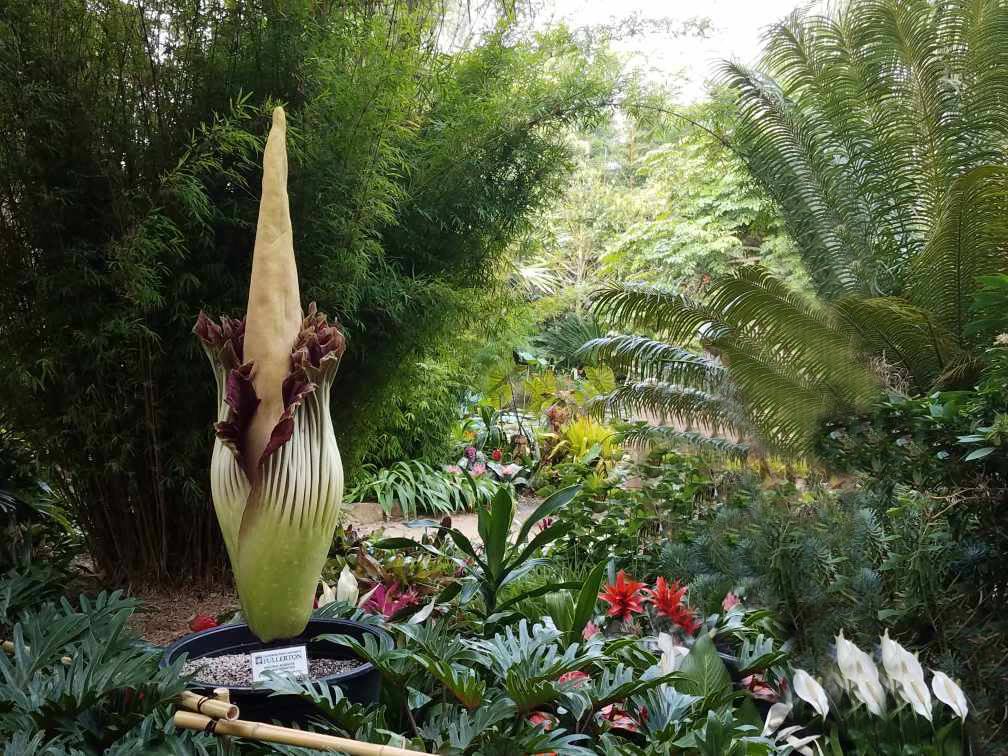 A Corpse Flower is getting ready to bloom at San Diego Botanic Garden in October.

ENCINITAS — An Amorphophallus titanum at San Diego Botanic Garden (SDBG) will bloom later this month. The corpse flower’s common name comes from the smell of the flowers, a rancid carrion scent that attracts the carcass-eating insects that pollinate it.

The bloom of a corpse flower is a rare and special event, as most plants require seven to 10 years to produce their first blooms and then bloom only every four to five years thereafter. The fully opened bloom lasts only 48 hours. The public can watch a 24-hour live stream of the plant, which grows as much as six inches per day. The public may also purchase tickets at sdbgarden.doubleknot.com/event/day/admission/23425 to visit the plant in person at the Garden’s Dickinson Family Education Conservatory.

The flower spike of the corpse plant is the longest unbranched flower spike of any plant in the world. The massive floral spike (up to 12 feet tall, in the wild) opens its petal-like spathe to reveal two rings of flowers along the spadix. The spathe and spadix wilt within a few days of the bloom.

“The corpse flower is the rock star diva of the plant world,” said SDBG President and CEO, Ari Novy, PhD. “We never know exactly when it’s going to perform, but when it does, it’s the most amazing show in all of horticulture. We can’t wait to see what this corpse flower is going to do.”

This will be the first A. titanum to flower at SDBG since May 2018. This 14-year-old plant last bloomed in October 2018. SBDG worked with Jim Booman, owner of Booman Floral in Vista, California, to create the seed for this particular plant in 2006. Ed Read, the greenhouse manager at California State University at Fullerton, then propagated and grew the seedling until 2016, when he returned the mature plant to SDBG’s collection.

The Amorphophallus titanum – or titan arum, as it is also known – is an endangered plant that grows on Indonesia’s island of Sumatra, with fewer than 1,000 plants remain in the wild. In order to expand the shallow genetic pool of this rarely blooming plant, SDBG will manually pollinate it using pollen collected and donated by the Huntington Botanical Gardens. SDBG is working with the Chicago Botanic Garden and other botanic gardens to conserve this plant through the Tools and Resources for Endangered and Exceptional Plant Species (TREES) project.

In order to monitor the growth of the flower spike and estimate the timing of the bloom’s fertility as accurately as possible, SDBG is using technology such as infrared cameras for nighttime filming and thermometers to track the rising temperature of the plant.

Entrance to the conservatory is included with admission. Members receive free admission. Non-member admissions range from $12 to $18. Each purchase of an adult ticket in October qualifies for one free youth (under 18) admission.