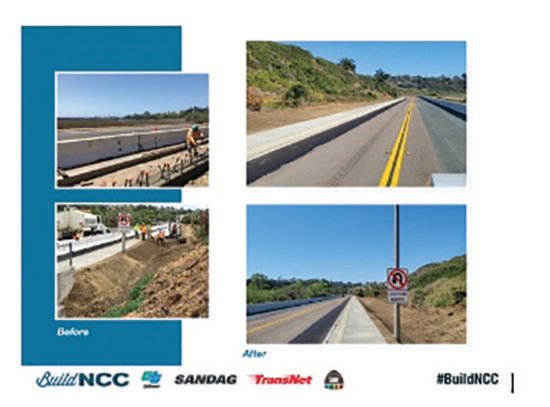 The Caltrans and SANDAG North Coast Corridor (NCC) project continues to make exciting progress in the cities of Encinitas and Carlsbad.

From the addition of Carpool/High Occupancy Vehicle (HOV) lanes on Interstate 5 (I-5) to new bike and pedestrian trails, and the restoration of the San Elijo Lagoon, crews are working diligently to deliver important quality of life projects throughout this corridor.

Part of the work includes environmental and community enhancements to the I-5/Manchester Avenue interchange in Encinitas. If you’ve driven by recently, you’ve likely seen crews working on a series of new bike and pedestrian improvements.

In February of this year, crews began preparing the location between the I-5/Manchester Avenue interchange and the San Elijo Lagoon Nature Center to install underground utilities by removing trees, shrubs, and other vegetation along the southerly side of Manchester Avenue.

Shortly after, in March, crews began demolition and excavation along the northerly side of Manchester Avenue between Ocean Cove Drive and MacKinnon Ranch Road to fill an existing sidewalk gap in the local network. After pouring concrete and restriping pavement, the new sidewalk was completed at the end of April, further enhancing east-west connectivity and coastal access.

Build NCC is a collaborative effort between the San Diego Association of Governments (SANDAG), Caltrans, and the United States Department of Transportation. The first phase of construction is in the cities of Solana Beach, Encinitas, and Carlsbad as part of the North Coast Corridor Program. Build NCC includes extending the existing carpool lane on I-5 in each direction from Lomas Santa Fe Drive to State Route 78, double tracking the rail line and replacing the highway and rail bridges at the San Elijo Lagoon, restoring the San Elijo Lagoon, and constructing nearly seven miles of new bike and pedestrian trails. Construction on Build NCC began in early 2017 and will be complete by 2022.