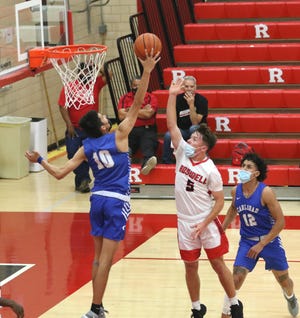 Zumbrun, after 238 wins and 12 years of coaching the Cavegirls, used to give Roswell girls’ coach Joe Carpenter fits with his different styles of play. Now, Zumbrun has taken over the Cavemen this year and may have ruined Roswell’s boys’ basketball season.

The Cavemen played with desperation and a hunger from the opening tip-off. Carlsbad played as if their playoff lives depended on a win.

Carlsbad (7-3, 3-2 District 4-5A) was led by Damon Perez four 3’s and a team-high 22 points, Andrew Miller’s 13 points and Tyler Gonzalez’s 10 points to escape with a 59-43 win and keep their playoff hopes alive at the Coyote Den Tuesday night.

“We came ready to play,” Zumbrun said. “We had depth tonight. We dropped off, we started four sophomores and a freshman last time we played them. Tonight, we came off the bench with a sophomore and a freshman. The seniors added depth.”

In Roswell’s last matchup, the Coyotes were able to win 63-60. That game the Cavemen played without four seniors that were quarantined because of COVID-19.

Those seniors were back tonight, and it was their matchup zone defense that took Roswell out of the game right away. It was also Carlsbad’s length that bothered them as well.

“This was a do or die game for us,” Zumbrun said. “I don’t know if we can make state tournament, but I knew if we lost this game that we wouldn’t have a chance. We still have a shot to get an at-large bid.”

Roswell seemed to have suffered a let down and came out flat. It seemed tough for Roswell to get back up after an emotional 87-84 win against Hobbs on Friday.

Roswell (9-2, 4-1 District 4-5A) missed shots near the basket and was plagued by 30 turnovers in the game. Roswell was never in the game and seemed to be frustrated many times.

Roswell didn’t just miss baskets near the hoop, they missed three-point shots and mid-range jumpers. The Coyotes just missed. If that wasn’t enough, Roswell missed their free throws, which seemed to create a whole other set of problems for them. Roswell was not effective in their press as Carlsbad broke it easily and scored baskets at the cup.

“That’s the worst game we played,” Roswell coach Moses “Dude” Burrola said. “We missed shots and didn’t handle the ball; had turnovers and we missed a ton of easy shots. We get the ball in the middle and we can’t convert or do anything.”

The Coyotes seemed out of sync all game, and received their scoring from senior Taymon Burrola, who led all scorers with 27 points. No other Coyote scored in double figures. The good news for Roswell is they control their destiny. It’s simple: If Roswell wins, they’re in.

No matter what Carlsbad does on Friday, if Roswell wins against Clovis on Friday, they will be in the playoffs. If they don’t and Carlsbad wins, Carlsbad owns the tiebreaker by beating Roswell by more than three points (14).

Things will not be easy for Carlsbad, because they have to beat Hobbs for the second time this season. In an earlier matchup between the teams: Carlsbad beat Hobbs 58-51 in Hobbs.

“We just didn’t play good,” “Dude” said. We have to win on Friday. It’s possible that we could not get in and all of the work that we have done won’t matter if we don’t win on Friday. I don’t want to rely on Hobbs to beat Carlsbad. It’s got to be us. We win, we’re in. If not, we’ll call it a season.”