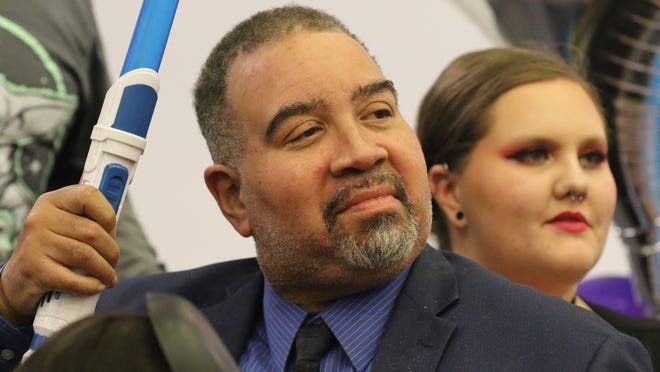 The war between the nefarious Dark Side and virtuous Jedi was waged in Carlsbad Thursday night at the Carlsbad Chamber of Commerce‘s annual banquet.

The annual event saw the Chamber honor its outgoing-Board President Ekta Bhakta, who dressed as Darth Vader, and incoming-President Dave Beaty who accepted his commendations in a stormtrooper costume.

To signify the transition, Bhakta passed a blue lightsaber to Beaty amid cheers from the audience which included several others in costume.

The Janell Whitlock Lifetime Achievement Award was awarded at the banquet to Mike Currier for his lifetime of public service in Carlsbad. This was the second year of that award, which was given to the late Janell Whitlock at the 2021 banquet.