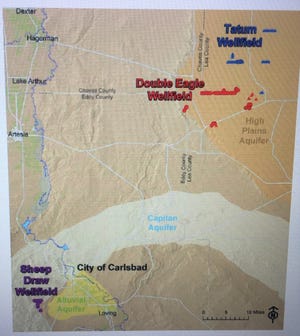 Petroleum companies who wish to drill near the City of Carlsbad’s water well fields must seek permission first after the City Council Tuesday approved a change to the Wellhead and Water Facilities Protection Ordinance.

Adopted more than 20 years ago, the ordinance protects the City’s water supply and associated facilities from potential contaminants and activities which may impair quality of the water supply, read a City Council document.

Maria O’Brien of the Modrall Sperling Law Firm in Albuquerque said updates to the ordinance were technical in nature.

City Utilities Director Ron Myers said the City of Carlsbad worked with O’Brien and Dave Romero from Balleau Groundwater in Albuquerque to review and update the ordinance.

More:Carlsbad Mayor: Looking back on the Double Eagle Water System

“Requirements for freshwater protection from petroleum drilling operations within those areas are defined. Any entity desiring to drill in the WHP areas must apply to the City for permission,” according to the document.

The two main components of the update dealt with confirmation of the depth of the freshwater strata and refinement of the WHP areas.

“The current Ordinance specifies a generalized depth of the WHP areas of 2,500 feet. The depth of freshwater is variable depending on where drilling occurs,” the document stated.

“The updated Ordinance adds language requiring confirmation from the applicant of the depth of freshwater strata at the specific proposed drilling site. As with the original ordinance, if drilling is approved by the City, the Ordinance requires the applicant comply with drilling procedures to protect the fresh-water zone within the WHP areas,” the document added.

More:Millions of acres of lands are leased but unused by oil and gas. How does New Mexico compare?

The Ordinance designates WHP areas at the sites of the Sheep Draw and Double Eagle wellfields, per the document.

The Board of Water and Sewer Commissioners recommended councilors approve the ordinance updates at a meeting in January, Myers wrote in a memorandum to councilors.