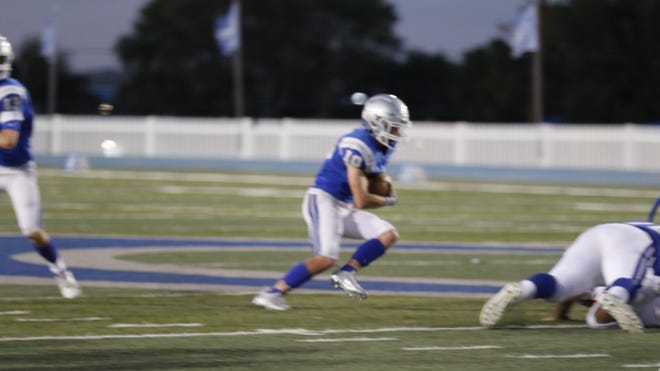 Now known as Dr. Veronica Bruce, she will join Terrance Orgain, George Wilson Knapp, and John Tigert as the 2021 inductees into the Carlsbad High School Athletic Hall of Fame Oct. 8.

Bruce graduated from Carlsbad High School in 2001 and earned multiple letters in volleyball and track field.

“I remember walking the halls of the Carlsbad High School gymnasium and seeing all the plaques and photos of all the hall of famers whenever I was there for summer sports camps for volleyball and basketball and thinking one day, I too could accomplish much to be could be considered one of those to go into the Hall of Fame,” she said.

“I think it’s truly an honor and I’m super excited about it and it is really a highlight on some of the accomplishments I’ve had in the past.”

Looking back more than 20 years since her high school sports days, Bruce said volleyball was her favorite sport. She earned four letters and was a two-time first team all-district volleyball player.

“I think that was just because part of that team aspect (and) being able to break some barriers and really overcoming challenges especially being somebody in a 5-foot-4 frame. I’m not exactly the tallest person in the world,” Bruce said.

“Yet I played all around and against people well over 6-foot trying to block me as I was spiking the ball.”

She said earning all-district two years in a row was fun. Bruce said track and field set the foundation for her future.

She was a four-year letter winner for the Cavegirls and attended the University of New Mexico in Albuquerque where she earned four more letters in the javelin throw.

“The year 2000 was when the New Mexico Activities Association introduced the javelin as a women’s event and at the time my neighbor and friend Billy Parsons, was throwing the javelin for the boy’s team and so I was excited there was this potential to throw the javelin,” Ward said.

Hard work and practice paid off for Bruce as she was a top javelin thrower at Carlsbad High School.

“I placed sixth in the state meet in my junior year when it was first introduced and then by my senior year, I won the championship and took home the title for women’s javelin in the State. That was a top honor for me and something I really had in my sights for my athletic career there at CHS,” she said.

Bruce competed for the UNM Lobos track and field team from 2001 to 2005. She found track at the university level challenging.

“Because there were people doing this a lot longer than I had. Not necessarily at the university itself. But the competition was definitely there,” she said.

While in Albuquerque she earned all-conference honors in 2004 and 2005 at the Mountain West Conference championships and she was an NCAA Regional Conference qualifier in 2003, 2004 and 2205.

She graduated from UNM in 2006 with a bachelor’s degree in biology and in 2015 she earned a doctorate in biological sciences.

“Today in live in Albuquerque I am a research scientist for a bio-tech company and so I really do enjoy research and just helping to back to the community and also give back to the world,” Bruce said.

Bruce said being included among the class of inductees was an honor.

“I knew Terrance Orgain from my track days at CHS. I believe he was an under classman while I was an upper classman. One thing I remember about him was his infectious smile and positive attitude,” she said.

Johns said Orgain was a world and national champion runner with Special Olympics.

Knapp died in 2017 and was two-time all-state player football player at Carlsbad High School. He earned all-conference honors at University of New Mexico and coached high school and college football before retiring in 1993 as the superintendent of the Canutillo Independent School District.

“The accomplishments all of these individuals have made not only for themselves but also CHS athletics is pretty amazing. I’m honored to be inducted alongside these three-amazing people,” Bruce said.