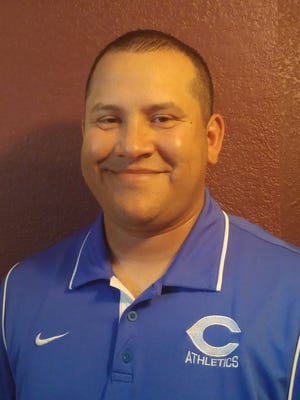 Carlsbad Municipal School Board seats for Districts 1, 3 and 5 will be on the ballot this November. Seven candidates initially filed to run for the school board, but two have withdrawn their names from the race.

Simon Rubio currently represents District 1 of the CMS school board. Rubio will be running for re-election against Jason Burns and Clancey Jeanne McMillan.

Former district two board member Trent Cornum, who resigned after moving, filed to run for District 5 but told the Current-Argus he resigned in support of Hollis.

The Loving Municipal School board is also having an election. Jacob Lee Duran and Cynthia M Bryan have filed as write-ins for District 4. Janice H. Rodriguez is running unopposed as a write-in for District 5.

More:Eddy County candidates for local office: Here’s who’ll be on the ballot in November

District 1 is a hotly contested seat

Rubio is running for a second term on the CMS school board. He is a lifelong resident of Carlsbad and has four children in the school district.

Rubio works for the City of Carlsbad as a plumbing and mechanical inspector, and has worked as a custodian and plumber for CMS.

Rubio said on of his biggest priorities for the board has been to oversee an $80 million bond to expand and remodel Carlsbad’s schools and build new facilities.

Burns has lived in Carlsbad for over 10 years. He said he married a Carlsbad native and has four children that are or will be a part of CMS. He is the Eddy County Public Works Director and has a background in engineering and business management.

Burns said his top priorities will be to keep kids in school, provide teachers and students with the tools they need to learn and expand STEM programs.

“We really need to refocus our schools on what’s important and in what America stand for — God, family and country,” he said.

Burns said he thinks prayer should be in the school system because that is what the country was founded on.

Burns said he thinks decisions that affect students in Carlsbad should be made locally.

“Our children’s education should not be political bargaining chips,” Burns said. “Santa Fe and Eddy County disagree in many issues and our children should not suffer because of our political disagreements.”

Some of these disagreements include choosing to close schools and require masks due to COVID-19. Burns said he does not agree with making students wear masks in school, but he understands it may be something they need to do to keep kids in classes.

More:Southeast New Mexico College Board of Trustees: Meet the candidates

McMillon is a fifth generation Carlsbad resident who graduated from NMSU Carlsbad’s nursing program before getting a BA in nursing at NMSU.

She has two children and 7 nieces and nephews that all attend CMS. McMillon taught health science classes at Loving High School and NMSU Carlsbad, and has worked as a surgical nurse.

“I believe the difficulties COVID caused in our education system highlighted weaknesses within our district that I believe I can help change,” McMillon said in an email.

McMillon said her top priorities will be to improve communication and transparency, and give both parents and teachers a say in school policies.

“I believe that parents should be heard regarding the decisions being made for their children and have the opportunity to have those conversations with the people making those decisions,” McMillon said. “I believe there is a disconnect between the decision makers and the people carrying out those decisions. Carlsbad has been blessed with phenomenal educators and their voices deserve to be heard.”

McMillon said she has actively participated in school board meetings over the last year and has been in regular contact with the current school board regarding her concerns.

“Our school board needs to be comprised of people that have witnessed firsthand the challenges that our children, teachers and parents have endured over the last year-and-a-half, and are willing to have the hard conversations,” McMillon said.

No race in Districts 3 and 5

Shirley is running unopposed for the District 3 school board seat.

She was born in Tulsa, Oklahoma but moved to Carlsbad in 2003 and became the Youth Pastors at the Word of Life Church. She is now a program manager at the Carlsbad Community Anti-Drug/Gang Coalition.

Shirley has two children in the school district and said she wants to do everything in her power to ensure that the children in the community are safe, protected and have access to the best education possible.

“One of the reasons local government is so important, is because those elected officials have to live and work in the community they are affecting and come face to face with the people who live here beside them everyday,” Shirley said in an email.

“Local control, partnered with total transparency between the schools and voters, is what gives our community a true voice.”

Shirley said the management and people skills she learned as the owner of a small local business with her husband will serve her will in the roll.

Hollis is also running unopposed for the District 5 school board seat.

Hollis is the Executive Vice President at CNB Bank and a Carlsbad lifer. His wife works for CMS and his children attend school in the district.

“Education has always been important to me,” Hollis said. “I feel like the education system in New Mexico is always falling short in so many different areas that instead of sitting in the sidelines, I decided to jump in and help make a difference.”

Hollis said his priority as a board member will to to focus on student’s education and stop worrying about politics.

“I think we got too political in so many different ways that I want to make sure that we are so focused on making sure our students are educated,” Hollis said.

While Hollis considered himself a conservative Christian, he said he was always willing to talk and cares about everyone regardless of their position.

Hollis said he can also help with budgeting the Infrastructure Capital Improvement Plan (ICIP) with his background as a comptroller. He said he has a passion for students and helps with his church youth group.

Claudia Silva is a reporter from the UNM  Local Reporting Fellowship. She can be reached at [email protected], by phone at 575-628-5506 or on Twitter @thewatchpup.