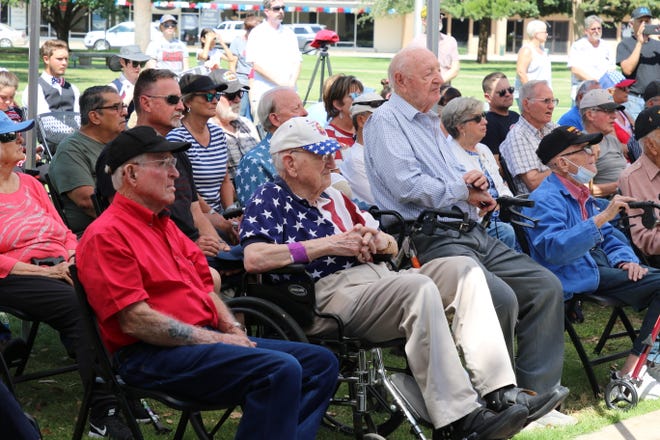 Six World War II veterans were honored with plaques, speeches, music from the 1940s and salutes from local citizens during a ceremony Saturday in Carlsbad.

The ceremony at the Eddy County Courthouse lawn gazebo was part of a two-day Independence Day celebration in Carlsbad.

“We were also given the names of more WW II veterans who aren’t able to join us today. We honor these men,” said Mayor Dale Janway during a speech.

“We use the term ‘The Greatest Generation’ to describe the men and women who served during WW II. It is certainly an accurate statement,” he added.

Janway said soldiers from Carlsbad and the United States set aside everything “and went across the world to combat the greatest threat known to freedom that the world has ever seen.”

“Some of them made the ultimate sacrifice,” he said.

Janway said people should not forget those who gave their lives during wartime.

“So, we can pursue the promise of America,” he said.

Ernie Carlson, District 1 Eddy County commissioner, asked attendees for a moment of silence to honor the veterans who could not attend Saturday’s ceremony.

“Throughout the war, millions of our servicemen answered the call to arms,” he said.  “Your presence here today is a tribute to these men and their families. We honor and remember.”

More:City of Carlsbad fireworks show back on for Fourth of July

Before Saturday’s ceremony, volunteers from Carlsbad MainStreet, Eddy County and the City of Carlsbad decorated the new Eddy County Courthouse lawn gazebo with patriotic decorations and pictures of the honored veterans.

Mary Garwood, Keep Carlsbad Beautiful director, and a member of the Carlsbad MainStreet Board of Directors, helped prepare for Saturday’s ceremony.

“I think this is what it’s all about,” she said of Saturday’s ceremony. “These men that were at the ceremony gave their time, their lives and their families gave up so much. I think it just really brought it back and gave us a good chance to remember what we’re all about here in America.”