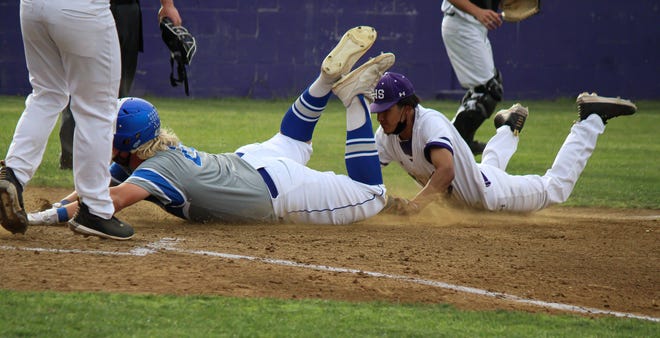 CLOVIS — It took 16 innings for Clovis High to finally dent the scoreboard against District 4-5A rival Carlsbad this season.

It took even longer for the Wildcats to get a hit.

CHS suffered its third consecutive no-hit loss to the Cavemen in the opener of Friday’s doubleheader at Bell Park, although the Cats finally broke through late for some runs in a 7-3 loss.

Their first hit came on senior Norbert Archibeque’s two-out single to center in the first inning of the nightcap. Clovis collected seven hits in that one, but still came out on the short end of a 7-2 verdict.

“We can’t get a bloop or even a ground ball when we need it,” CHS coach Richard Cruce said. “I thought we kind of gave away two good games, for the most part, by our pitchers.”

More:Carlsbad blanks Clovis on both diamonds

With younger, less experienced players having to step in due to injuries, the Cats have had a tough time staying competitive in a fairly strong district. They did, though, at least stay within some striking distance in these games until late.

The Cavemen (11-5, 5-3) scratched out a run in the first inning of the opener, but were held in check by senior left-hander Josh Martin until putting together a six-run fifth which included five hits, a walk and an error. Senior left fielder Josh Carillo’s two-run double capped the rally.

Left-hander Grant Harvill carried a shutout into the sixth, but gave up a run when the Cats’ Juan Jimenez reached on an error, took second on Harvill’s wild pickoff throw, moved to third on a wild pitch and scored on freshman Manuel Gutierrez.

Senior Kayden Bratcher worked the seventh, but Clovis got two more runs with the help of another error, two walks, a hit batsmen and a wild pitch. Bratcher got the final out with two CHS runners in scoring position.

“We still gave up some runs,” said Carlsbad coach Alan Edmonson of the no-hitter, adding that it was his team’s fifth of the season overall. “We made errors and gave up walks. But we won the games, which is the ultimate prize.”

Carlsbad (11-5, 5-3 district) has all but been eliminated from the district race, but still hopes to finish a strong second behind Hobbs and earn a Class 5A state tourney berth.

“If we can take care of business (this week), we’re still in good shape to take one of those (three) at-large spots,” Edmonson said.

In Game 2, the Cavemen had a runner at second with two outs in the top of the third against freshman Will Jordan when they put together two hits, three walks, a hit batsman and a passed ball to score four times. The Cats got two in the bottom half on an RBI groundout by Justin Lawson and Archibeque’s run-scoring double, but that was it.

Clovis (4-12, 0-8) has lost eight in a row, all in district play. The Cats play district twin bills at Hobbs on Tuesday and at home against Roswell High on Friday to close out the season.

“We’re fighting it a little,” Cruce admitted. “We’re trying to keep it as positive as we can. I just want us to go out and compete.”

Carlsbad travels to Roswell on Tuesday and will close out the regular season on Friday at home against Hobbs.