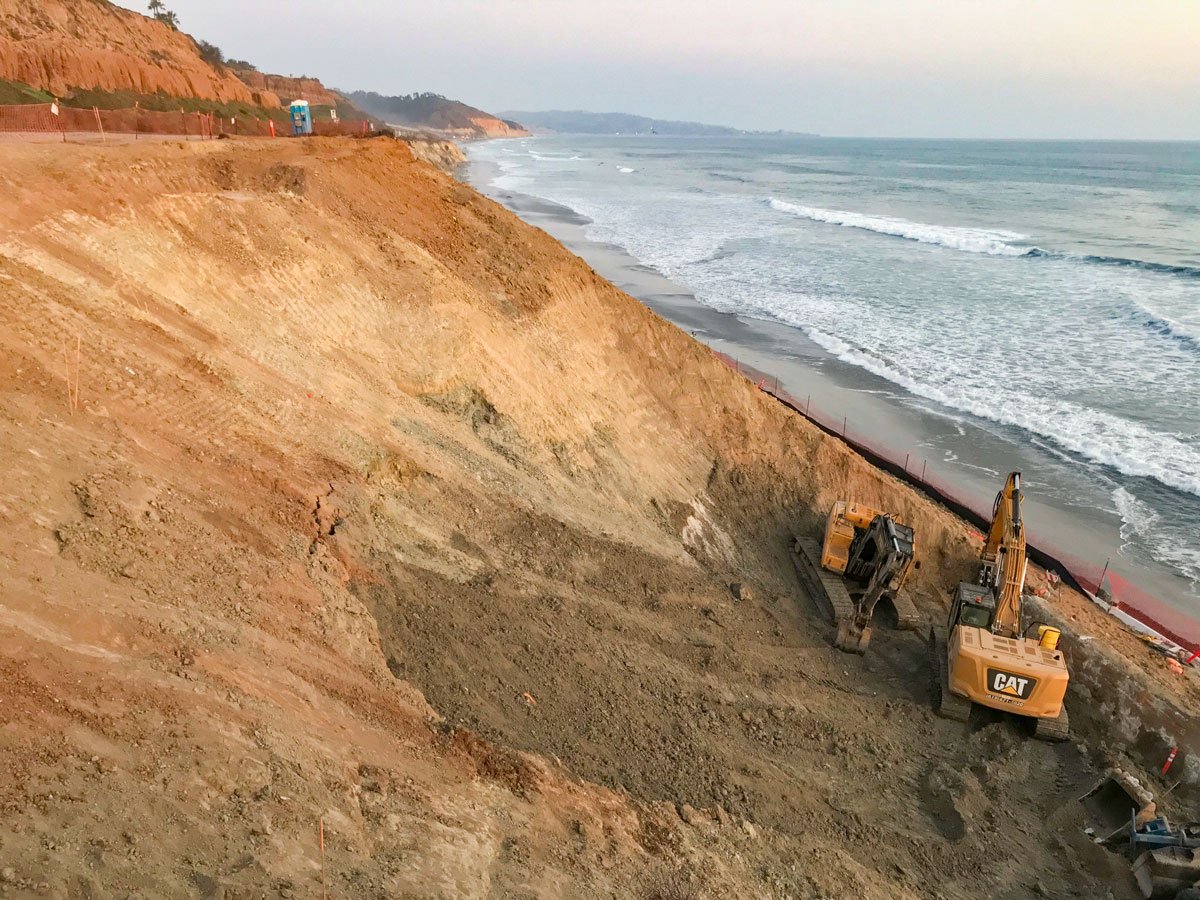 This is in response to the “Protect Del Mar bluffs” article written by Mayor Terry Gaasterland.

I have put some thought into the situation as I’m an enthusiast of both railways and bridges. Here are THREE possible “solutions” that could be used alone or mixed and matched to suit the terrain.

I’m surprised that SANDAG and the mayor have opposing ideas on how to currently save the bluffs but both want to see the rails eventually realigned through a tunnel. I think the tunnel plan is an absurdly expensive and disruptive boondoggle unless the idea is to justify and grab as many dollars as possible from the trillions that Biden is tossing around.

Only a small section of bluffs pose a problem to the rails at present. This area is getting most of my attention. My ideas keep the bluffs essentially intact and not buried under concrete, but I do not agree that the bluffs are some ecological gems or a pristine eighth wonder of the world.

They are just a pile of unstable sand — deadly at times. All my plans preserve them anyway so they should get some traction.

Leaving the rails on the bluffs would obviously be a much cheaper option and the existing view would be preferable to passengers than going through a billion-dollar tunnel if the problem with the crumbling cliffs can be satisfactorily addressed and fixed.

The clearest way to extend the life of the bluffs and rail line is to relieve the stresses on the bluff under and around the track and to reinforce the bluffs at the same time.

The way to do that is to build a bridge over the problem areas — not just a conventional bridge, but a “zero clearance” or “zero elevation” bridge. The track bed would stay in the current alignment but clear the bluff by just a few inches so that all the loads and stresses from the track and passing trains are eliminated. From a distance it would appear as before.

This bridge would be supported by an array of hidden columns topped with isolation pads to minimize vibrations to the bluff. The details are all based on existing well-tried technologies that can be adapted to this project.

The second idea is to just stabilize the sand itself. This isn’t a brand-new idea either. It involves injecting a resin into the porous fragile structure to permanently bond the sand grains together.

Epoxy resins come to mind but many other bonding agents are available to reinforce soil structures. There would be no disruption or change in appearance of the bluffs.

The third idea is to build a conventional (but well designed) modern bridge — an elegant, low-profile bridge nestled alongside the bluffs that could be visually appreciated with the bluffs easily visible behind it.

This is a very brief overview to try and get people to think outside the box and get on with it.