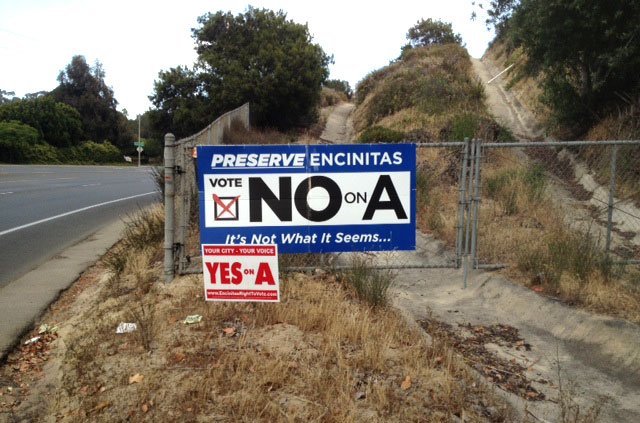 The recent decision by District Court Judge Earl H. Maas III regarding the city’s suit against voter initiative Prop A came as a breath of fresh air to many residents. We won!

The city has had a contentious relationship with residents over Prop A since its beginnings.

Prop A, a citizens initiative led by local activists, offered Encinitas citizens “a right to vote” amendment, limiting building heights to 30 feet and requiring up-zoning changes to be put before the people for a vote. The entire council, including Mayor Catherine Blakespear and Councilman Tony Kranz, did not support it.

Blakespear and the Encinitas City Council crafted Measures T and then U, offering their version of affordable choices and voters rejected both. Instead of coming up with a plan voters would accept, Blakespear and the council chose to let the courts decide.

Prop A was temporarily set aside and a judge signed off on the 15 Measure U properties that are currently cycling through the Planning Commission and Encinitas City Council for approval or disapproval.

Frustrated they couldn’t up zone projects without a resident vote, Blakespear and the council sued the residents to have their vote overturned.

Realizing the bad optics of suing her residents, the mayor soon pivoted and sued the California Department of Housing and Community Development (HCD).

This smoke and mirror pivot still saw the city attempting to overturn our Prop A vote. Residents had to raise funds for attorney costs, with no monies coming from the city. Ironically, the city paid to sue its own residents, so residents footed the bill for both its prosecution and defense!

The 15 Measure U properties are becoming a reality. Two are approved; 250 home Fox Point Farms on Quail Gardens Road and the 72 unit Vulcan/LaCosta apartment project. Vulcan was first rejected by the Planning Commission and then approved unanimously by the City Council in August.

The most contentious and egregious Measure U housing project, the Goodson site, was rejected in a unanimous vote by the Planning Commission. The project, located off Rancho Sante Fe Rd and Encinitas Blvd is a 283 unit apartment building, offering a mere 42 low-income units. It has only one entrance and exit for residents and deliveries.

Olivenhain residents are rightly alarmed by the danger this unprecedented six-story project will create in the event of a wind-fueled Santa Ana fire on already traffic impacted Rancho Santa Fe Road. Neither the developer nor the city is offering any traffic mitigation. It’s not required by the state.

Soon, Goodson will be in the hands of the City Council to decide. Led by Blakespear, they are determined to approve high-density housing, regardless of the impact or danger those types of projects will have on residents.

Goodson’s 42 affordable apartments are so measly in size, even Commissioner Kevin Doyle mentioned them during deliberations. The 42 one-bedroom apartments could not support a family of four or five.

Remember, the Encinitas City Council, including Mayor Catherine Blakespear and Councilman Tony Kranz, did not support Prop A and voted for all 15 Measure U sites, so it should come as no surprise if the majority of council members vote yes on Goodson.

The mayor and council recently approved the 6th Housing Element, proudly proclaiming we will meet our affordable housing requirements with the state. The reality is, with only 15% or 20% affordable units required, including the 15 Measure U properties, it is obvious we will NOT meet our state-mandated requirements.

After careful deliberation last spring, the Planning Commission voted to increase our affordable housing percentage to 50%, in part to lessen the impact of high volume density growth in already saturated Encinitas and to also achieve our low-income housing requirement with fewer units faster.

In June, the mayor and council rejected the Planning Commission’s proposal, voting to allow future projects to supply only 15% or 20% affordable units, even though HCD had signaled they would sign off at 50%. Apparently, the city did not take the possibility of a judge deciding Prop A in the favor of the voters seriously.

In 15 months we will be voting for a mayor and for council seats in Districts 3 and 4. If Mayor Blakespear loses her state Senate primary, she will surely run again.

If she moves on to run for California State Senate, it’s rumored Councilmembers Tony Kranz and Joe Mosca are both considering a run for mayor.

Bearing in mind their complicity in overturning Prop A and their consistent votes approving high-density projects, do we really want to keep our city’s future growth in the hands of those who through the court system sought to overturn our constitutionally protected vote? It will be up to you to decide.

Cindy Cremona is a resident of Encinitas.