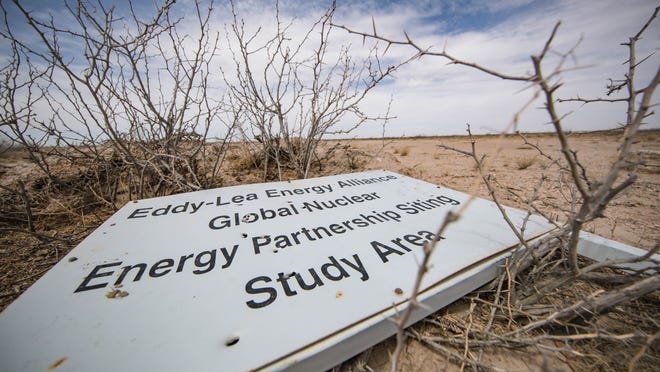 Local leaders in southeast New Mexico supported and ultimately brought an underground nuclear waste repository – the only of its kind in the U.S. – to their community.

And as the DOE aims to retool how it evaluates consent when siting nuclear waste storage, earmarking $16 million for the project, city and county leaders near the WIPP site hope their voices of approval will again be heeded for another facility to store nuclear waste.

The location for Holtec’s project was already chosen and would likely be unimpacted by the DOE’s two-year project to define policies to site future projects, but the announcement by the Department opened a national dialogue on what it means for a community to consent to taking in nuclear waste.

Holtec International was recruited in 2015 by a consortium of city and county leaders in the region known as the Eddy-Lea Energy Alliance to build a site to temporarily hold spent nuclear fuel rods at the surface on a 1,000-acre tract not far from the WIPP site.

That waste, the byproduct of nuclear power reactors, would be much higher in radiation than the TRU waste disposed of at WIPP, and the Holtec site was designed to only hold it temporarily until it can be moved again to a permanent repository.

A facility to dispose of and permanently isolate the spent fuel does not exist in the U.S., and Holtec’s proposal set off a wave of opposition from New Mexico’s state leaders including Gov. Michelle Lujan Grisham, State Land Commissioner Stephanie Garcia Richard and New Mexico Attorney General Hector Balderas.

This chorus of disapproval centered around the lack of a permanent resting place for the waste and fears the Holtec site could become a “de facto” location where the nation’s nuclear waste could sit for decades.

But Carlsbad Mayor Dale Janway, an ardent supporter of the project, said Holtec would bring a massive infusion of capital – about $3 billion – invested in the community, and a new way of diversifying the region’s fossil-fuel-dependent economy.

He pointed to the WIPP site as evidence that nuclear waste could be managed safely, provide stable jobs and support for a local community for generations.

“Proximity to a facility absolutely should be the key variable when weighing consent.” 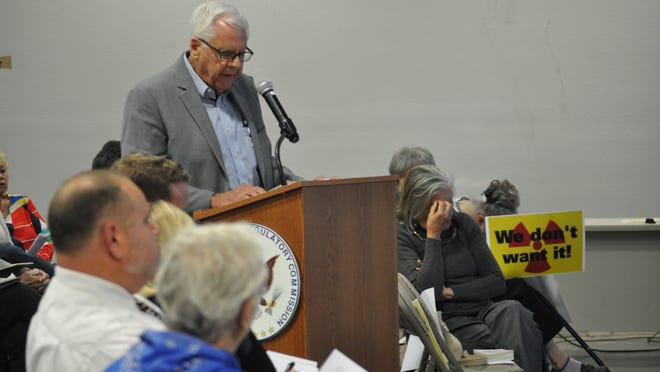 Lujan Grisham and her backers argued the project could put oil and gas and agriculture operations at risk, with the governor calling it “economic malpractice.”

She called on lawmakers in the 2023 Legislation Session starting in January to deliver a bill Lujan Grisham could sign to ban projects such as Holtec’s from being built in the state.

Don Hancock at Albuquerque-based government watchdog group Southwest Research and Information Center argued thousands of public comments issued by New Mexicans during Holtec’s licensing process, along with distaste expressed from the state’s political leaders meant Holtec did not have adequate consent to justify the project.

“Clearly they don’t. There’s no question of that,” he said. “You look at the U.S. Constitution, the Constitution enshrines states’ rights in the federal government. It’s clear that states have authorities that local governments don’t.”

The Nuclear Regulatory Commission recently issued an environmental report that found the Holtec site would have “minimal” impact and recommended a license be issued, a move criticized for its lack of consideration from risks posed to communities along the transportation routes as waste would be brought in via rail from nuclear reactors around the country.

A final licensing decision was pending.

“My problem with leaders in Carlsbad saying, ‘We’re the only community that matters,’ is the waste for Holtec and for WIPP go through many other communities,” Hancock said. “Why don’t they get a voice?”

The NRC did recently issue a license to a project like Holtec’s by another company Interim Storage Partners in Andrews, Texas along its border with New Mexico – also in the Permian Basin oilfields also opposed by that state’s leadership.

It’s a rare moment of bipartisan dissent from the Republican administration of Texas Gov. Greg Abbott and Democrats in Santa Fe, which Hancock said resulted from inherent flaws in premise of moving waste from generators into temporary storage without a permanent repository.

“Holtec was sold locally as a temporary thing. If it comes here and there’s no place to go, it’s permanent,” Hancock said. “In 50 years, with nowhere to go, Carlsbad would be unable to non-consent to permanent.”

But the concept, known as consolidated interim storage, was not the brainchild of Holtec or the City of Carlsbad.

It was devised in a 2012 report from the Blue Ribbon Commission on America’s Nuclear Future, convened under the administration of former-President Barrack Obama, which also studied how to site such projects and the need for consent from state, Indigenous and local government organizations.

A lack of such agreement with any one of those levels of government could lead to delays in the project, the report noted, and make it more difficult to answer the question of what to do with America’s nuclear waste.

“We believe it will be essential to affirm a role for states, tribes, and local governments that is at once positive, proactive, and substantively meaningful and thereby reduces rather than increases the potential for conflict, confusion, and delay,” the report read.

“In sum, whatever the specific authorities and resources of a given community, state, or Indian tribe, experience shows that determined opposition at any level of government can at a minimum significantly complicate and delay, and in many cases defeat, best efforts to site a facility.”

Janway argued state administrations frequently change and basing consent for a project like Holtec’s on the current administration’s stance could be irrelevant later depending who is in office.

That’s why he said local communities should have the biggest voice, as those who would face the most benefits and risks to weigh in approving a project.

“One of the issues with defining consent through a state office is that control of that office may change hands every four years,” Janway said. “One governor may support a project, while the next may oppose it. This makes defining consent at the state level all but impossible.”