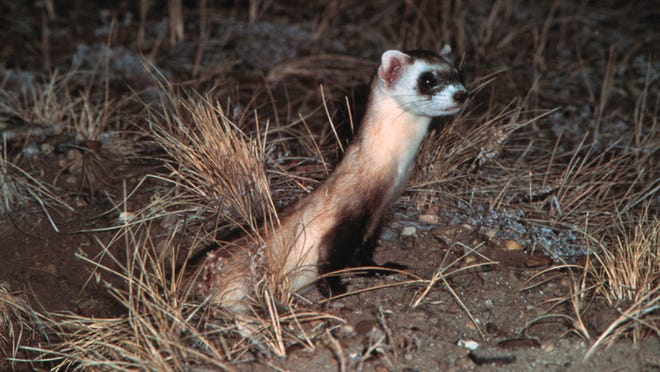 An imperiled flower growing amid the southeast New Mexico oilfields was the subject of a federal lawsuit calling on the U.S. Fish and Wildlife Service to protect the species along with 10 others throughout the U.S.

The Wright’s marsh thistle, along with the other species, warranted federal protections under the Endangered Species Act, argued the Center for Biological Diversity in its lawsuit, to avoid extinction of the plant native to New Mexico and struggling in habitats throughout the state.

The agency failed to act and file its determinations on the species after petitions were made for their listing, read the Center’s notice of intent.

When a petition for a listing is filed, the Fish and Wildlife Service, under federal law, must publish subsequent final listing decisions within two years.

The Center argued the process can take up to 12 years, and that 47 species have gone extinct while waiting for the federal government to act.

More:Funds on the way for New Mexico’s endangered species through US Senate bill, grants

This could lead to the extinction of native New Mexico wildlife, the suit argued, reducing biodiversity and allowing the degradation of habitats which could put other species at risk.

“The Fish and Wildlife Service should be on the front lines of the fight to stop the extinction crisis. Instead, it’s bogged down in bureaucracy and politically driven decision making,” said Noah Greenwald, endangered species director at the Center.

What is it? Where does it grow?

The Wright’s marsh thistle is a native plant to New Mexico.

It can grow up to 8 feet tall and is covered in succulent leaves with pink flowers, taking up to two years to fully develop.

The thistle grows in high elevations at 3,450 feet to 7,850 feet above sea level in marshy areas and wetlands.

It is known to grow throughout southeast New Mexico in Eddy, Chaves and Otero counties, along with Guadalupe County in the northeast region and Socorro County to the west, per records from the Fish and Wildlife Service.

Thistles were also found in Cochise County, Arizona, along that state’s eastern border with New Mexico.

Santa Fe-based WildEarth Guardians first petitioned the Fish and Wildlife Service to list the thistle for protections in 2008.

In 2010, the agency identified the thistle as a candidate for listing, and a 2011 settlement called for a decision to made for the species and other candidates in the next five years.

The Service also published a 12-month finding in 2010, but reported a decision on the thistle was delayed for “higher priority” actions.

In 2020, the Fish and Wildlife Service proposed the Wright’s marsh thistle for a listing as a “threatened” species, meaning extinction was not thought to be imminent but would be without action.

About 159 acres of New Mexico land was also proposed as “critical habitat,” meaning the acreage would see additional restrictions as needed for the species’ regrowth.

A recovery plan was to be developed by the Service, but records show it had yet to come to fruition.

“Delays in protection have real consequences, leading to further declines and even extinction. It’s heartbreaking this agency can’t seem to get it together to make timely protection decisions,” Greenwald said.

The U.S. Fish and Wildlife Service did not respond to a request for comment from the Carlsbad Current-Argus as to why a final decision had yet to be made.

In its proposal published Sept. 29, 2020, the Fish and Wildlife Service found the species was threatened by declining water availability and due increased drought throughout New Mexico, along with water diversions for industries like oil and gas or agriculture.

Livestock grazing and oil and gas drilling could also pose a risk to the thistle’s survival, read the proposal, as such uses occur heavily in southeast New Mexico adjacent to the plant’s habitat.

“While laws and regulations related to water quality have reduced the risk of contamination in and near occupied locations from oil and gas production, the likelihood that a spill could impact these habitats is still present based on the high volume of oil and gas leases near these areas,” read the proposal.

“An accidental oil spill or groundwater contamination has the potential to pollute water sources that support Wright’s marsh thistle, and mining activities could alter or destroy habitat.”