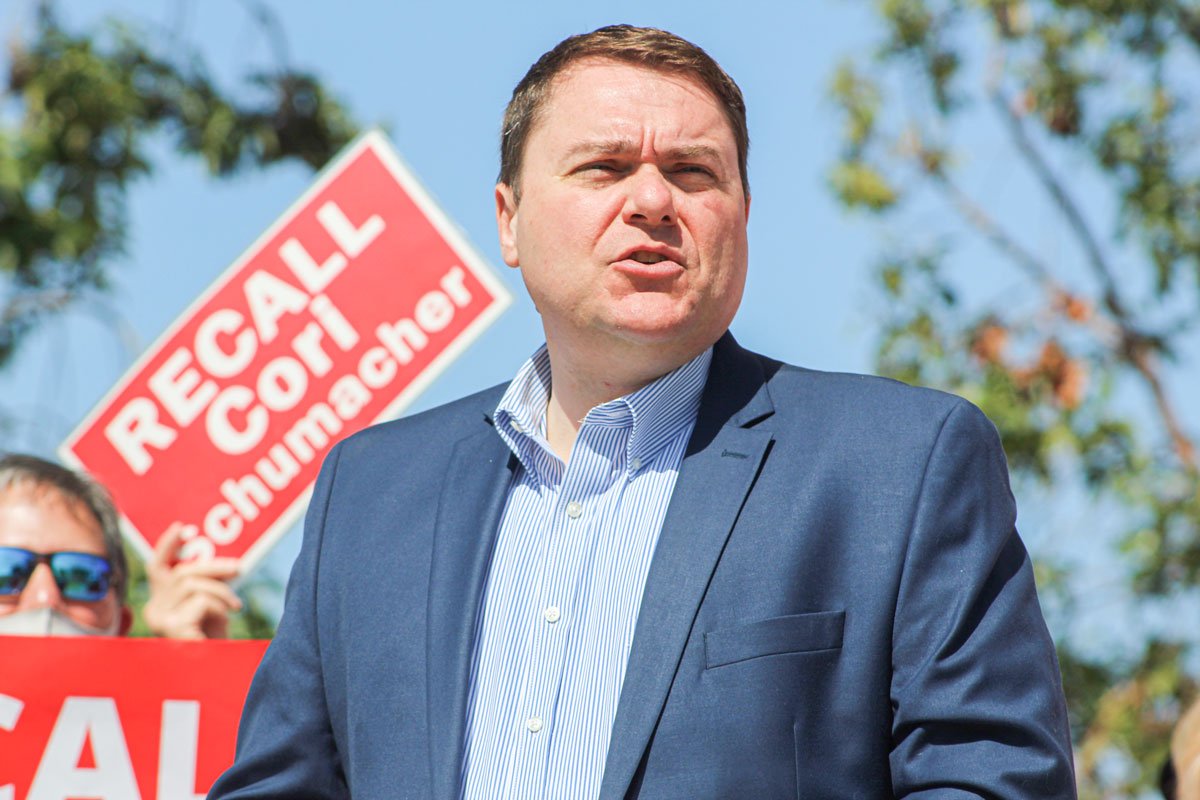 CARLSBAD —A well-known Republican radio host and local rabble-rouser launched a recall campaign seeking to remove Carlsbad City Councilwoman Cori Schumacher from office during an April 5 rally in front of a crowd at Pine Avenue Park in Carlsbad.

Carl DeMaio, founder of Reform California, said Carlsbad residents have had enough of Schumacher’s behavior, vicious attacks on residents and “pay-to-play” schemes with her political donors.

“The misbehavior’s got to stop. The grandstanding has to stop,” DeMaio said. “The sort of misbehavior and misdeeds she’s engaged in, it has no place in this community. My hope is (that) other city officials in our region and across the state, take note. We will not tolerate it and you will be removed from office.”

DeMaio said the Democratic city leader attacks residents who disagree with her positions rather than engaging in dialogue or taking their concerns into consideration.

DeMaio also cited Schumacher’s recent legal woes after a North County judge struck down her civil harassment restraining order filed against two Carlsbad residents and one former resident, ruling the councilwoman’s actions violated their constitutional right to free speech. DeMaio said this was just one of several examples of Schumacher’s inability to govern and take criticism.

Katie Taylor, a small business owner for 35 years, said Schumacher also engages in political race-baiting in addition to policies aimed at harming business owners. Taylor, like DeMaio, slammed Schumacher for filing a harassment order against residents critical of her policies, calling her “corrosive and divisive.”

“Cori Schumacher has been so divisive for Carlsbad,” Taylor said. “Everything is about race, she’s hurt small business owners, she filed that suit against her constituents … and she is toxic. Pure toxicity for the City of Carlsbad.”

Joining DeMaio at Monday’s rally in Carlsbad were 10 local business owners “sponsoring” the recall, many of whom chided Schumacher for pushing to adopt an “enhanced” COVID-19 enforcement policy directed at small businesses operating in violation of state and county health mandates in January.

Also, DeMaio condemned her proposed project labor agreement for the Clean Energy Alliance, a Community Choice Aggregation program set to launch on May 1. The union-friendly language contained within Schumacher’s labor proposal caught the CEA board of directors off-guard and was not approved.

According to campaign filings, Schumacher received more than $40,000 in donations from the International Brotherhood of Electrical Workers Local Union 569 in late 2019 and early 2020.

Schumacher did not respond to a request for comment.

DeMaio filed the recall paperwork on April 5 and once all the responses to the petition are certified then signatures can be collected for a special election.

The former San Diego City Councilmember has spearheaded a series of recall and repeal efforts in the past few years with mixed results. In 2017, DeMaio led a successful recall campaign against former State Sen. Josh Newman, but his Gas Tax Repeal campaign the following year fell short at the polls.

More recently, DeMaio has led signature drives to help recall Gov. Gavin Newsom, a movement that has gained considerable momentum over the past several months.

DeMaio said his group must secure about 3,800 signatures and believes the effort will be successful. Taylor echoed those sentiments as well. She said people are tired of Schumacher’s behavior and combativeness toward constituents. DeMaio added he expects an election sometime during the summer.

Reform California also launched a website, citycouncilrecall.com, outlining their concerns, while also asking for monetary contributions, signatures to the petition and seeking volunteers.