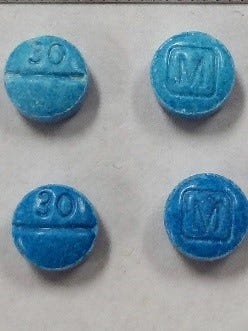 The tragic overdose of a 12-year-old Brent Sullivan raised concern among the Carlsbad community about drug use in the area’s youth, as data from the Centers for Disease Control and Prevention (CDC) 2019 High School Youth Risk Behavior Survey (YRBS) showed New Mexico teens have higher rates of drug use than most of the country.

In New Mexico, 17.6% of youth have taken some form of narcotic pain medication without a prescription in 2019 while the national average was 14.3%, according to the survey.

Roughly 14.2% of high school students in Eddy County have admitted to misusing prescription pain medications—the fifth highest in the state followed by Chaves County (14.1%), according to the 2021 New Mexico Substance Use Epidemiology Profile.

Cocaine, heroin and methamphetamine use among New Mexico youth was roughly double that of the national average, according to CDC data.

NIDA’s website stated that drug dealers have been found to mix fentanyl with other drugs such as heroin, cocaine and methamphetamine. Fentanyl is a synthetic opioid that is similar to morphine but is up to 100 times more potent, according to the National Institute of Drug Abuse (NIDA). The drug is often made into pills that look like legitimate prescription medications.

While data indicates New Mexico teens do more drugs, they drank alcohol at similar rates as the national average.

Over 20% of New Mexico youth had their first drink before turning 13 years old and 28.6% were active drinkers, compared to the national averages of 15% and 29.2% in those respective categories.

Drug use during a pandemic

The effect the COVID-19 pandemic had on drug use is still unknown but early data indicates it may have been exacerbated.

The Keiser Family Foundation poll found that 13% of adults increased drug or alcohol consumption due to coronavirus-related stress.

Children who experienced pandemic-related stress, depression or anxiety, or whose families experienced hardship during the pandemic, were most likely to use alcohol or drugs, according to NIDA’s website.

An online survey conducted by the Carlsbad Community Anti-Drug and Gang Coalition in 2020 found that students reported high levels of mental distress and suicide ideation.

The survey’s highlights also show that Eddy County saw an increase in drug overdose deaths in 2020.

The coalition was not able to conduct in-person surveys and the data they collected was limited. The group plans to conduct further surveys at Carlsbad schools but is still limited due to COVID-19 regulations.

A study funded by NIDA found that nationwide alcohol use went down among 10- to 14-year-olds but nicotine use and misuse of prescription medications went up during the first six months of the COVID-19 pandemic.

The coalition’s executive director Joana Wells said the group has had concerns about illegal marijuana being laced with fentanyl, during a meeting on Oct. 6.

Carlsbad Police Officers Joshua Calder and Michael Shott said they were not aware of any specific cases in the area, though reports of marijuana laced with fentanyl were made in New Jersey and Georgia.

Some efforts have also been made to help address drug use by treating addiction. In March the City of Carlsbad approved a lease agreement with Avalon Ranch to open a substance abuse treatment facility for women with children.

The Carlsbad Community Anti-Drug and Gang Coalition has worked to address drug use in the community since 2004 when methamphetamine became a growing problem, Wells said.

She said one of the coalition’s goals is to educate the community on the dangers of drugs like fentanyl.

“It’s not this ‘just say no’ campaign because we know that doesn’t work,” Wells said. “You have to go through the entire process with people to show them what it looks like, who has it, how it can be presented and what harm it can do to you and your family.”

The coalition plans to host community forums to talk to the people about fentanyl use. Wells said the forums will include presentations from local law enforcement and healthcare workers. The forums have yet to be scheduled.

She said the coalition also hopes to offer classes that teach administration of naloxone or Narcan, a drug used to treat opioid overdoses.

Naloxone can work for up to 40 minutes while fentanyl can last four to six hours, Wells explained.

“It’s not realistic to say Narcan will save somebody’s life who has overdosed on fentanyl unless they get immediate medical attention,” she said.

The coalition also offers information on drug storage and hosts medication take-back events to keep unused drugs out of the hands of children.

Other efforts ran by the coalition include events for the communities youth, forming Teens in Action, a group of Carlsbad teens that help plan drug-free events, Teen Court, a first offenders program that allows teens to keep their records clean by attending peer-run court sessions and collecting donations for a new K9 officer.