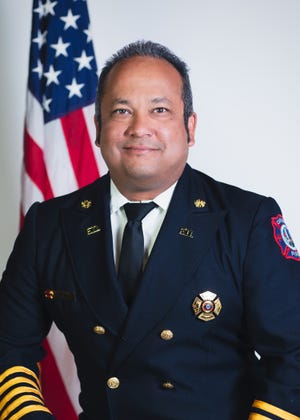 He spent three years volunteering in the small unincorporated community located on the western edges of the Carlsbad city limits. Lopez was named chief nearly eight years ago and said being a volunteer helped as he transitioned to firefighting fulltime.

He said volunteer fire departments benefit the City of Carlsbad and Eddy County in many ways as the municipal fire department has a memorandum of understanding (MOU) to help with EMS calls in the county.

The City also provides help in the volunteer districts when those departments don’t have personnel.

“Volunteers have a full-time job. They’re only allowed to respond when they’re off work,” Lopez said.

As of October 2020, Mack said the average age of Eddy County volunteer fire departments is 42 and applicants of all ages are needed.

“As we do our best to partner with the community to prevent fires we are graded based on active members within the district,” he said.

He said fire districts are base on a three-to-one ratio.

He said ECFS needs a minimum of 12 active members on each district’s roles to meet the minimum evaluation of one engine company.

“Most districts have two or more engine companies which increases that number to 24 members,” Mack said.

As an all response organization, Mack said ECFS performs lots of duties.

“We provide fire, EMS, vehicle extrication, technical rescue, Hazmat, search and rescue and any others for service we receive,” he said.

“It’s the local departments that determine what level of training they want,” he said.

Brunson said training for volunteer firefighters at the State Fire Academy is the same for paid firefighters like those found in Carlsbad and Artesia.

“It’s in compliance with NFPA standards which is an international standard for services in general. The only real difference of what we offer for volunteer folks and what we offer for the paid departments is just the scheduling thing,” he said.

“I think this is the struggle with volunteer fire service nationwide is you’re basically asking someone to work a second job for free,” he said.

“A new member within the first year is expected per ISO to complete 240 hours of structural firefighter training,” he said.

“All skills must be maintained annually through continued education,” he said.

Brunson said volunteer firefighting is a tiered system as one starts at the basic level or firefighter 1 and works their way up.

“What we try to stress to folks is that firefighter 1 is really where you want to be. The ultimate goal is to get everyone home safe at the end of the day and that’s the class with best shot of making everything happen,” he said.

Besides trainings, Mack said volunteer firefighters have other responsibilities such as regular attendance at monthly business meetings and responses to requests for service within a community as available.

“Most of us that work here or have worked here in the past either came out of the volunteer system like I did myself years ago or have had some involvement in that. So, we understand the problems that kind of revolve getting volunteers training and we try to the best of our ability to work with those guys (and) to make sure they can get training in their area,” he said.

Lopez said there is a brotherhood between municipal departments like Carlsbad and the volunteer fire departments scattered across Eddy County.

“The fire service draws all of us together,” he said. “We work well together.”

Mack said there are many ways people can attain information to become a volunteer firefighter.

“We encourage members to visit us on the Eddy County Website under fire service or call our office at 575-628-5450. Also, if you see a volunteer at one of our 21 Stations please feel free to stop by,” he said.