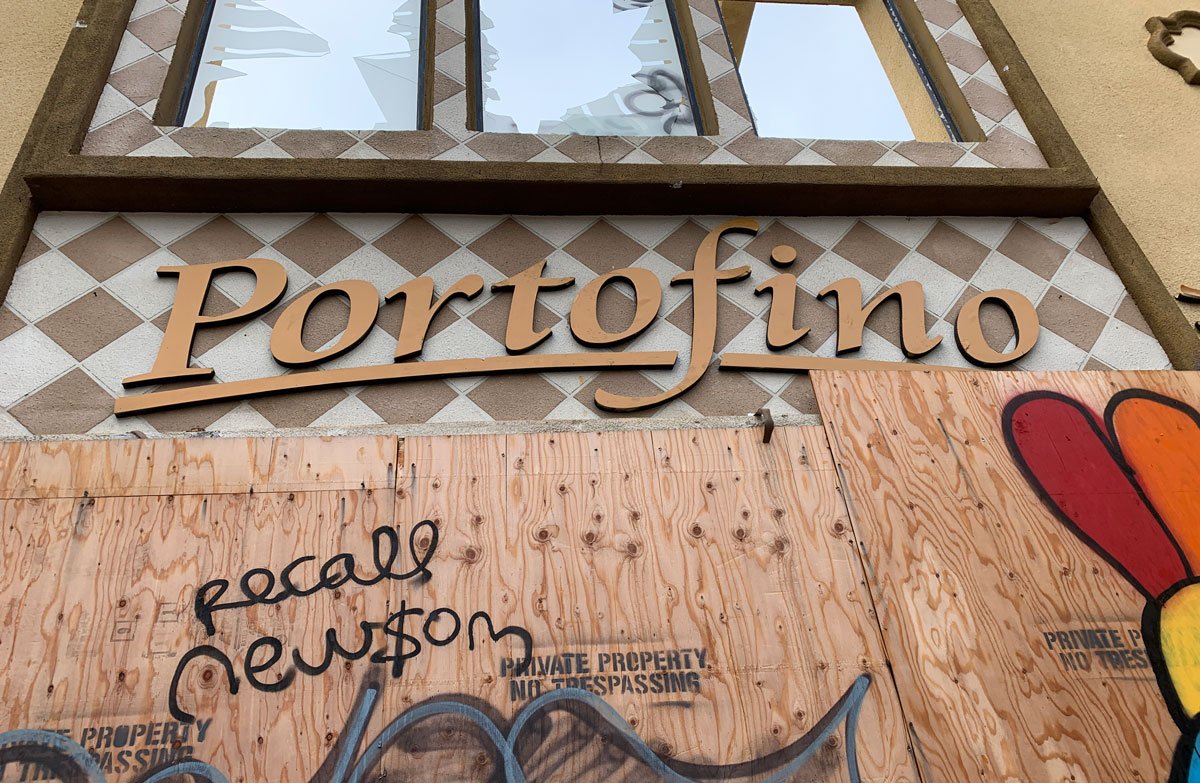 ENCINITAS — At first glance, a boarded-up hotel covered in graffiti along Coast Highway 101 in Encinitas has deteriorated into blight, illicit drug activity and a homeless crash pad since its closure several years ago.

But behind the scenes, an Encinitas developer has purchased Portofino Beach Inn and neighboring Captain Keno’s Restaurant to transform the properties into residential units, office spaces, restaurant and bar, the latter of which will be named after the longtime Leucadia eatery.

Adam Robinson, owner of RAF Pacifica Group (RPG), told The Coast News the firm has submitted plans to the city for its Moonlight Mixed-Use Project, in partnership with SmithGroup, a third-party architecture company.

Julie Taber, the city’s public information officer, confirmed the city has received RPG’s application for the project, “which is pending the first cycle review letter.”

Plans for The Ray, a controversial 35-unit boutique hotel at the Portofino site, have been pulled by developer Hotel 101, which has since sold the property to RPG, Robinson said. The Coast News called several times and left a message with Hotel 101 regarding its plans for The Ray.

“The Ray has been withdrawn from Planning Commission,” Robinson said. “That is 100% dead.”

According to Robinson, the new Moonlight project addresses many residents’ previous concerns with The Ray, removing both the rooftop pool and access to Melrose Avenue. The longtime Encinitas resident said the proposal will abide by all development regulations outlined within the city’s general plan, such as not exceeding 30 feet in height, to avoid triggering a vote under Proposition A and keep the project focused on the community.

The development will also have two floors of underground parking with hundreds of parking spots, office spaces and residential “micro-units,” which are smaller, more affordable apartments.

The project will adopt sustainable design strategies, including rooftop solar panels to supplement energy use and power electric vehicle charging stations and gardens throughout “to channel and filter rainwater from a series of sloped roofs,” according to SmithGroup’s design narrative provided to the city.

“(We aren’t) asking for variances, we are just following the zoning and the rules,” Robinson said. “I have three kids born at Scripps Encinitas. I’m not an out-of-town developer. We are not hiring a PR firm. I’m personally meeting with everyone on the project. We’re local and we are trying to take in a lot of the local community.”

And for locals discouraged to see Captain Keno’s leave Coast Highway 101, Robinson said the Moonlight project will pay homage to the revered restaurant and bar by purchasing owner Gerry Sova’s liquor license, memorabilia and rights to the name. Robinson expects the bar to be completed by 2025.

“It’s an amazing establishment that has been here a really long time,” Robinson said.  “We are locals and we want to continue some kind of tradition. We understand people might be sad at losing it but we want them to be excited about what they get in return.”

The Coast News was unable to reach Sova for comment, but Robinson said they are currently waiting to close escrow.

In 2018, RPG purchased the vacant restaurant, office and retail space at Pacific Station shortly after Whole Foods closed, buying out the big-box grocer’s lease to “activate that center for the community.” The developer later acquired the remaining commercial space last year.

RPG has recently completed a remodel of Encinitas Boxing and Fitness on Westlake Street and 330 Cedros in Solana Beach. Robinson’s firm, which is relocating its office to the former Whole Foods space, is now waiting for the deal to close with Sova and to receive the city’s feedback on its proposal.

But waiting hasn’t been easy over the past year.

Since closing in 2015, the long-shuttered Portofino hotel has devolved into a hotspot for graffiti, vandalism, drug activity and homeless occupancy. Two weeks ago, The Coast News was able to look inside the slumping boarding house.

Similar to the building’s exterior, the abandoned hotel’s interior is covered in spray paint, broken glass and doors with holes carved through the wood.

Within some of the rooms, several orange-capped hypodermic needles, some of which appeared to contain an unknown liquid, were found on the floor along with other drug paraphernalia. Upon entering one of the rooms near windows overlooking the highway, a man was sleeping in a makeshift bed.

Robinson said during the height of the pandemic, they had several homeless individuals living inside the hotel and protected from eviction under squatter’s rights, forcing Robinson to seek assistance from the courts.

“At the beginning, (the homeless) moved in,” Robinson said. “They had squatter rights and we couldn’t evict them. It was the most unbelievable thing I’d ever seen in my life. We had to work with the court system to get them out.”

Robinson said the squatters remained in the abandoned hotel for months with free access to water and electricity. According to Robinson, they were not permitted to shut off electricity or water in order to maintain the building’s fire suppression system.

Robinson and Hotel 101, both of whom are looking after the property until RPG is granted land-use entitlements, told The Coast News they are doing everything they can to keep people out of the structure, including working with law enforcement and fire officials.

“It’s been really bad, but currently we don’t have anyone living there,” Robinson said. “The sheriff kicked everyone out. It was a lose-lose for us.”

According to a spokesperson for Hotel 101, a crew went inside the hotel just days after The Coast News visited the site to remove all the doors on the individual rooms and clean up broken glass.

“We keep boarding it up because people keep breaking into it,” said the Hotel 101 spokesperson, who would not provide his name.  “Just yesterday we took all the doors off the rooms. We are working with the Sheriff to make sure nothing illegal happens, to keep it boarded up and safe for everybody. You can’t keep homeless people out 24/7 unless you have security 24/7. We are doing our best. It’s not a beautiful site at this point but at least it’s not unsafe.”