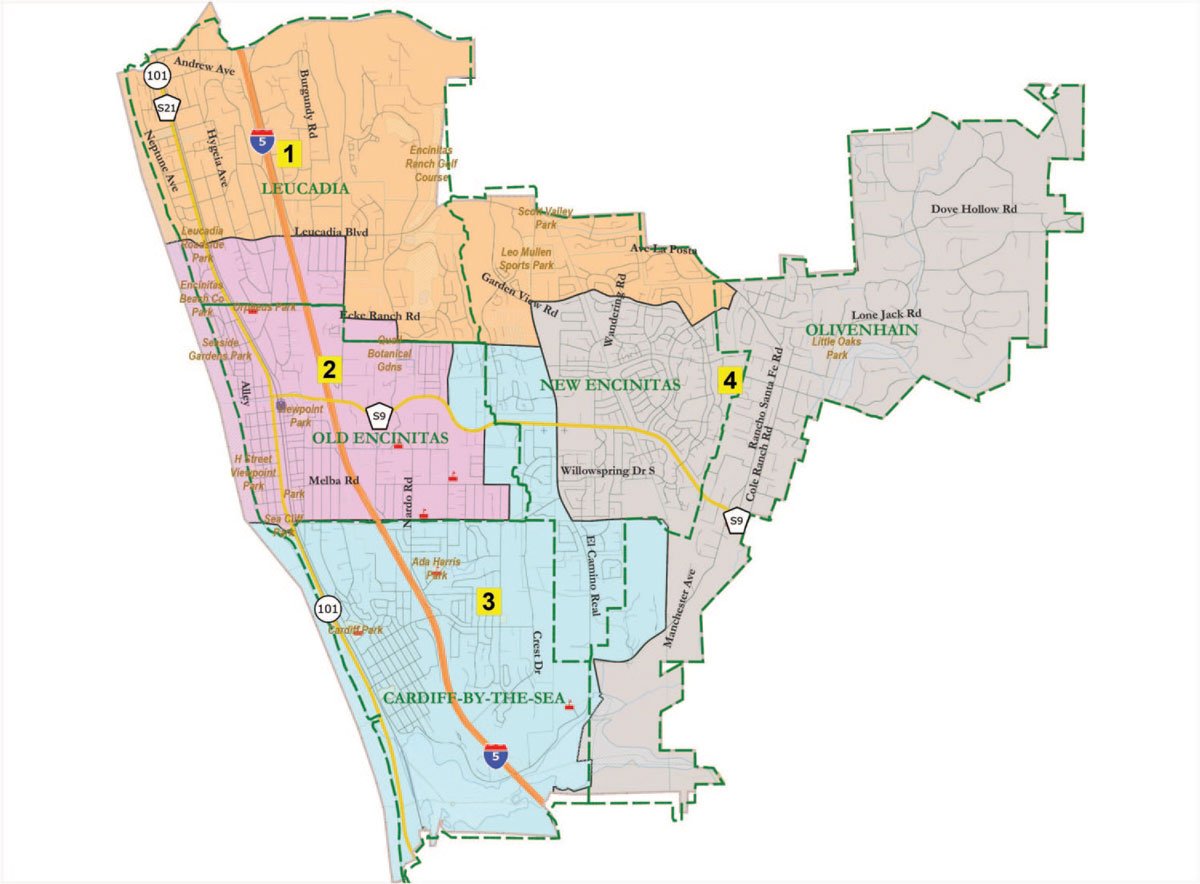 ENCINITAS — The City of Encinitas held its first of four public hearings this week as part of its redistricting process with little public input on the process.

The city is entering a redistricting process relatively soon after changing from at-large to district elections in 2017. Under federal law, each city must draw new district lines based on data from the 2020 U.S. Census.

Despite the city’s efforts to promote the redistricting process through signs, advertisements and banners along major streets, no one registered to participate in the first public hearing during the Encinitas City Council’s virtual meeting this week.

“It may be that people are not interested, or we have to do a little bit more analysis of how we can reach out to people where they’re at to get their feedback,” Councilmember Joe Mosca said after no one was called for public comment.

Councilmember Kellie Hinze said residents she has spoken have expressed surprise the city is already going through a redistricting process.

Councilmember Joy Lyndes expressed optimism that public input will increase as the process gets further along and more data becomes available.

Due to a quirk with how the State of California releases census data, the complete results are still not available as the state makes adjustments. The full data set is expected before the end of September.

Encinitas residents can use demographers’ tools available on the city’s redistricting webpage but official district map submissions won’t be accepted until the final numbers are released.

“Sometimes it’s easier to edit something than to come up with something,” Lyndes said. “So if people start doing maps and we start talking about maps maybe that will generate more dialogue.”

Mayor Catherine Blakespear was confident there will be more public interesting redistricting when the state’s numbers are finalized.

There was controversy surrounding the city’s last redistricting process when it was discovered some of the final maps chosen by the city were created by then councilmember Tasha Boerner Horvath.

Despite no public comments during the meeting, there were five written comments submitted to the city that were not read but were included as part of the meeting’s agenda.

Only one of the written comments, from resident Gary Noles, mentioned redistricting process. Noles wrote that he hopes the process is open and transparent and that the city does “not allow current city council members to submit suggested plans.”

The next step in the redistricting process will be a public mapping workshop held on Oct. 16.

Jace Schwarm, a risk manager for the city working closely with the redistricting process, said the city will have the full census data available at the next month’s workshop.

“I think that will engage citizens as well,” Schwarm said.

The mapping workshop will be held from 10 a.m. to 2 p.m. at the Encinitas Community and Senior Center and will be fully open to the public.

“We will look for all ways to have an engaging workshop with the public,” Schwarm said.