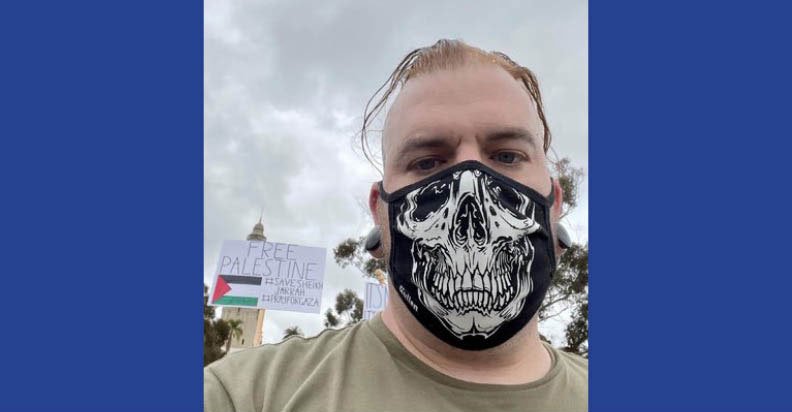 ESCONDIDO – Matthew Corrales, a former candidate for the Vallecitos Water District and former substitute teacher for the Sweetwater Union High School District, was identified last week in a CC Unit YouTube video alleging that he sought to solicit sex from a minor.

Corrales, 37, was filmed by Ghost, an online vigilante and creator of CC Unit (Creep Catcher Unit), inside The Shoppes at Carlsbad, allegedly attempting to meet up with a 14-year-old boy, according to the video.

Instead, Corrales was confronted by Ghost at which time he attempted to obscure his face with a mask and repeatedly said, “Nothing physically happened,” before quickly exiting the mall and driving away, according to the video.

CC Unit also posted screenshots of explicit messages allegedly exchanged between Corrales and the minor that depict Corrales making plans to meet with the boy in a bathroom stall, as well as making plans for a “dinner date.”

In one message, Corrales tells the boy to dress casually because it “should not look like a date… more taking my son to dinner.”

Ghost also alludes to explicit pictures that Corrales allegedly sent to the minor.

Corrales is a former member of the San Diego County Democratic Party but was censured by the party in Aug 2020 after allegations were made against him of pedophilic behavior, according to a statement by the Escondido Young Democrats.

Eva Posner, a spokesperson for the San Diego County Democratic Party sent a statement to The Coast News via email:

“Matthew Corrales is no longer a member of the San Diego County Democratic Party. He was censured last year by our members for the harassment and intimidation of a number of women and Jewish members of our Party. He was also roundly defeated at the ballot box and rejected in his bid to serve on our state central committee.

“Our members have made our condemnation of his despicable behavior clear and he is no longer welcome in Democratic spaces. We are sure the allegations will be vetted by law enforcement and receive their day in court, and that he will be brought to justice for his pattern of dangerous, wholly unacceptable behavior.”

The county Democratic Party removed Corrales from consideration of endorsement as a candidate, removed his name from the list of Democratic candidates on its website and issued a rating of unqualified. They also required him to issue an apology to the seven complainants.

Despite San Diego County Democratic Party’s decision, Corrales remained a member of the Escondido Democratic Club until June 15, the same day this video was released.

The Escondido Democratic Club did not remove Corrales despite multiple members voicing their concerns about Corrales’ behavior.

In Jan 2021, a member of the Escondido Young Democrats (EYD), brought the issue of Corrales’ harassment toward themself and others to the Escondido Democratic Club (EDC) executive board, but the party still refused to remove Corrales.

After the release of the CC Unit footage, the Escondido Young Democrats released a statement calling for the Escondido Democratic Club executive board to resign:

“(Escondido Young Democrats) has known for months about Corrales’ propensity for harassment and incivility towards those he disagrees with. We condemn his harassment, as well as his alleged actions in the CC Unit Video. Some members of the (Escondido Democratic Club) Executive Board failed to act to terminate Corrales’ membership thereby exposing their members to months of vitriolic attacks. This is in stark contrast to the leadership of the (San Diego County Democratic Party) and other Democratic organizations where decisive action was taken to separate Corrales from their membership. Therefore, we strongly urge the (Escondido Democratic Club) Executive Board Members who refused to take action to resign effective immediately.”

Corrales ran for the Vallecitos Water District in Nov. 2020 but was defeated, after which he was no longer a registered Democrat and voted for Republican Congressman Darrell Issa, according to the Escondido Young Democrats’ statement. However, it remains unclear how the group came to know Corrales’ private voting record.

Despite this, Corrales remained a member of the Escondido Democratic Club until last week.

“They haven’t been taking steps to address our frustration in a way that’s meaningful or authentic,” said Justin Domecillo, a senator at Escondido Young Democrats. “That has been personally frustrating for me because I personally think that their inaction enables, and I wish that they would follow EYD’s example of publicly condemning this person.”

An Escondido Democratic Club representative said they do not wish to comment on the matter, but said that Corrales is no longer a member.

A spokesperson at Sweetwater Union High School District confirmed that Corrales was a substitute teacher but “separated from the district in 2009” and “is no longer affiliated with the district.”

Corrales could not be reached for comment and has deactivated all of his social media accounts.