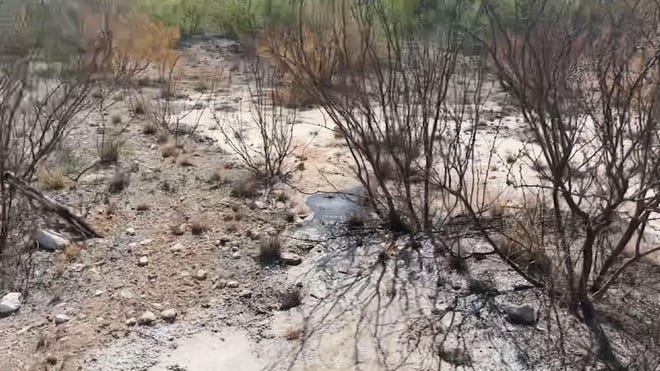 A series of billboards erected throughout southeast New Mexico accused the oil and gas industry of threatening the health of frontline communities and damaging the environment.

Lucas Herndon, energy and policy director at Progress Now said the intention was to draw attention to the impacts of oil and gas pollution on everyday life.

The billboards referenced outdoor recreation activities like fishing and playing baseball, alleging pollution resulting from oil and gas production could put such normal goings-on at risk.

Herndon said that not only does fossil fuel production threaten human health and the environment, but New Mexico’s dependence on extraction for more than a third of its budget left the state and local communities in oil and gas regions susceptible to the commodity-based industry’s boom-and-bust tendencies.

“While the oil and gas lobby tries to focus entirely on their fiscal contributions to the state, we want to remind them and every New Mexican that those contributions come at a steep price when it comes to the health, safety, and future of our beautiful state,” Herndon said.

“While oil company CEOs post record profits from resources mined in New Mexico, oil and gas communities live with some of the highest in the nation asthma rates, increased earthquakes from fracking activity, and an unsustainable economic rollercoaster. We deserve better.”

The campaign was timed with an ongoing rulemaking before the State’s Environmental Improvement Board (EIB) which is considering adopting stricter restrictions on oil and gas emissions to combat pollution from ground-level ozone.

The New Mexico Environment Department (NMED) proposed the rules to the Board earlier this year, and the EIB over the past two weeks held public hearings to solicit testimony from industry and environmental experts and concerned New Mexicans.

The timing of the billboards was meant to send a message to NMOGA and the fossil fuel industry in New Mexico, Herndon said, to advocate for the needs of the people over private profits.

“We still remember when NMOGA announced a few years ago that they wanted to become ‘the most powerful organization in the state,’” Herndon said. “We want them to remember that the people of New Mexico are, and always will be, the true power in the state.”

Meanwhile, NMOGA embarked this month on its own public messaging, extolling the benefits of oil and gas on New Mexico on social media through its “Safer and Stronger” campaign.

Both the Association’s Twitter and Facebook feeds saw videos posted featuring a New Mexico farmer, teacher and firefighter that said they supported oil and gas because of the funding their sectors receive.

The teacher Ashley Niman, who teaches fourth grade, per the video, argued the funding schools receive from oil and gas was essential to support her students.

He said the industry was committed to continue to produce energy while protecting the environment.

“New Mexicans know better than to believe anything from discredited political groups whose destructive policies would only bankrupt and dismantle New Mexico,” McEntyre said.

“NMOGA and our members support taking meaningful action to address the risks of climate change, and the oil and natural gas industry has led the way with innovation and technology to ensure that production today and tomorrow is cleaner, safer, and more environmentally sound than ever before.”

More:What we know about environmental impacts of the Big Papi oil drilling project near Loving

McEntyre said oil and gas companies worked closely with the State of New Mexico to help devise its new regulations on emissions. He said a balance cane be struck between producing oil and gas in New Mexico and protecting people and the environment.

“Over the past two years, we have worked with state regulators to help develop rules that would reduce emissions of methane and ozone precursors while also ensuring the vitality of our industry and economy,” McEntyre said. “New Mexico is capable of doing both at the same time, and we won’t be misled by false choices and political theatrics.”