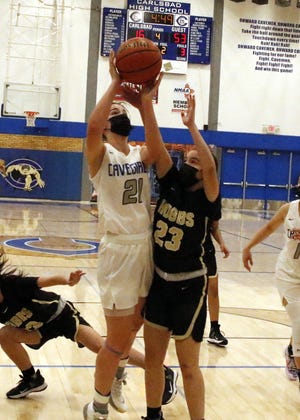 In a game that featured two Top-10 teams in Class 5A, No. 1 Hobbs showed District 4-5A belongs to them until someone takes it away with a 57-27 win over No. 6 Carlsbad in a game that was decided before halftime.

Hobbs (7-0, 3-0) had already outscored district foes Roswell and Clovis a combined 121-56 while Carlsbad (5-2) outscored the same two teams, 71-60. Right out of the gate Hobbs scored on its first possession and didn’t let up until the second half.

The Lady Eagles played the majority of the second half up by at least 35 points, enacting the running clock rule, making it that much harder for Carlsbad to mount a comeback attempt.

Carlsbad committed 23 turnovers in the first half and was limited to just 13 shot attempts.

With about four minutes left in the first quarter Carlsbad finally got its first points of the game off a layup by Cavegirls junior Morgan Boatwright to cut the lead, 4-2. Hobbs answered with two quick scores and ended the quarter on a 13-2 run.

In the second quarter Hobbs took complete control. Forcing Carlsbad into turnover after turnover and ended the half with a buzzer-beating 3-pointer by sophomore Wisdom Anthony to put the Lady Eagles up, 42-8.

“Carlsbad always is consistent in this gym for the last whatever years. John (Zumbrum) always has them ready to play here. It’s always been a tough game. We came in here with a chip on our shoulder and wanted to win. We went 29-1 last year and lost to Carlsbad last year on their home court. We wanted to avenge that one a little bit.”

“Hobbs is a great team. They’re the No. 1 team in the state for a reason. They’ve got athletes everywhere. They just put pressure on us (at the start) and we didn’t handle it like I thought we should have. We’re going to regroup and focus on Clovis and Portales. They’ll be two tough challenges before our rematch with Hobbs.”

Hobbs senior Elise Turrubiates led all scorers with 13 points and Anthony added 11. The Cavegirls were led by Boatwright and Mariana Sepulveda who each scored six points.

Carlsbad travels to Clovis while Hobbs returns home to host Roswell on Friday. The Cavegirls and Lady Eagles will face each other in the season finale on April 30 in Hobbs.