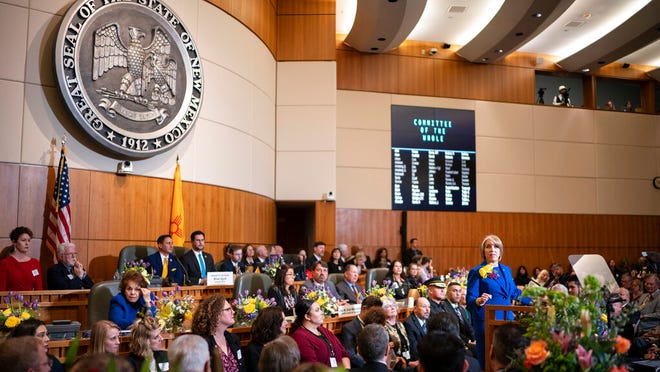 Two bills that would work to transition New Mexico away from its reliance on oil and gas advanced in the Legislature this week as Democrats continue to push such an agenda against Republican opposition.

House Bill 297, known as the Workforce and Economic Prosperity Act was granted a “do pass” recommendation by the House Commerce and Economic Development Committee on a 6-4 vote Wednesday and was sent to the House Labor, Veterans and Military Affairs Committee for further discussion and a vote that could send the bill to the House Floor.

If passed, HB 297 would establish the Workforce and Economic Prosperity Council within the Department of Workforce Solutions, tasked with drafting policy and making recommendations to support the growing workforce in renewable energy.

More:Bill to transition New Mexico away from oil and gas reliance advances in Senate

Sponsor of the bill Rep. Angelica Rubio (D-35) said the intent was to ensure communities impacted by New Mexico’s transition to renewable sources of energy were involved in the process and local employment benefitted.

She said she grew up in southeast New Mexico where the economy is dominated by oil and gas extraction, and the region would be impacted more than others as the state shifts away from fossil fuels.

“I was born and raised in the Permian Basin,” Rubio said. “And I have learned in my time in the legislature that when conversations are happening between industry and environmental groups, the actual communities that are impacted are too often left out.

“This legislation is about uplifting the voices of those who live at the epicenter of the transition in our energy usage and in our economy that we know will continue in the coming decades.”

Voting members of the council would include representatives from the departments of economic development, workforce solutions, finance and administration, taxation and revenue, general services, higher education, public education and Indian affairs.

This council would create a strategic plan to support the clean energy workforce, creating working groups and taking input from local communities and state agencies.

The goals of the council would be to find ways to expand and diversify New Mexico’s economy, while proposing policy changes aimed at increasing renewable energy production and developing the needed workers through training and apprenticeship programs.

Rep. Melanie Stansbury (D-28) who co-sponsored the bill said it was needed to ensure oilfield workers can maintain employment as New Mexico seeks to develop more renewable forms of energy.

“This legislation is about building a more just, equitable, and sustainable future for New Mexico, that centers our communities and their visions for the future,” Stansbury said. “I am proud to stand in solidarity with the incredible work community organizations have been doing across the state to lift up this work.”

Another bill that would create a task force specifically aimed at finding ways to move New Mexico away from its dependence on oil and gas was headed to the Senate Floor for a vote in the full chamber.

Senate Bill 112 would create a Sustainable Economy Task Force made up of up to 24 members including representation from the governor’s office, State Land Office, state treasurer, secretary of finance and most other cabinet-level positions.

From Fiscal Year 2020 to FY 2027, the task force would develop annual strategic plans to “transition the state economy away from reliance on natural resource extraction,” the bill read.

SB 112 received a “do pass” vote on Wednesday on a 6-5 vote in the Senate Finance Committee.

He said he supported renewables and economic diversification, but not to the detriment of oil and gas.

“All of you people who just hate inanimate objects like coal and oil and fuel aught to get over it a little bit,” he said. “These are great things. Can we make them better? Yes. Do we need to diversify our economy? Yes.

“Obviously, I love oil and gas. But I’ve also always supported trying to find something else to do because we all live in the boom and bust cycle and we need something else.”

Sharer, who ultimately voted against the bill, argued environmental fears of oil and gas development were unfounded and based on fear mongering.

“Our kids are concerned,” he said. “Why are our kids concerned? Because they’ve been fed a consistent diet of panic without any real science behind that panic. This is unscientific propaganda.”