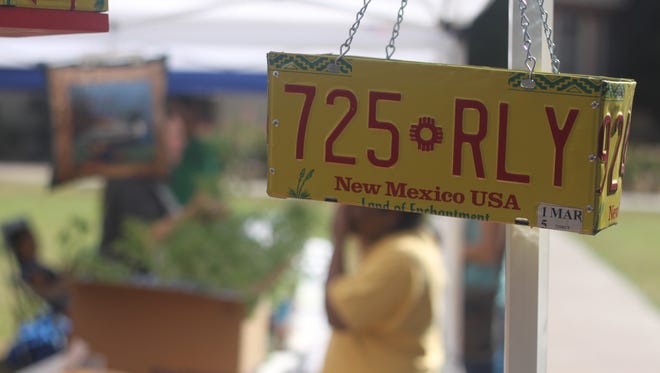 Carlsbad MainStreet and the Pearl of the Pecos Arts and Cultural District joined forces to create a major Carlsbad Downtown Farmers’ Market.

Both entities share the same boundary lines within the City of Carlsbad. MainStreet focuses on economic vitality and Pearl of the Pecos promotes arts and culture in Carlsbad.

“With our district being the exact same area it’s right for us to combine our efforts just to make downtown bigger and better and just to make everything have a variety of offerings,” said MainStreet Executive Director Ashly Key.

Pearl of the Pecos Executive Director Kat Davis said in past years her group sponsored an artist booth at the Farmers’ Market.

“That’s where the collaboration began. There’s always crafters and makers that always sell at the Farmers’ Market. MainStreet and Pearl of the Pecos combined and made sure there was an artist spot at every Farmers’ Market,” she said.

Key and Davis said the 2020 Carlsbad Downtown Farmers’ Market featured actual farmers from Eddy County and their goods, though activities were limited due to COVID-19 health restrictions enacted by the State of New Mexico and other vendors were concerned about getting sick last year.

Davis said Pearl of the Pecos and MainStreet would build on the partnership as the inaugural Farmers’ Market of 2021 starts May 20. The market would be open to the public 5:30 p.m. until 7:30 p.m. at the lawn of the Eddy County Courthouse.

The Farmers’ Market closes for the season on Oct. 21.

Special events are planned on the third Thursday of each month throughout the summer.

“On those dates we’re just going to make more of an event out of the market. I’m going to focus on bringing a lot more crafters, artists, and vendors of those types in. Of course, we’ll still have our regular farmers, all of that going on. We just want to draw a lot people to the MainStreet and Arts and Cultural District and give them a reason to come out,” she said.

Key said sidewalk sales, food trucks, bands and informational booths for Carlsbad organizations that would like to showcase their functions are part of the plans for Third Thursday’s.

“Almost use it as an information hub for people that have moved to the area and are not sure what they want to get involved in. Because sometimes it’s hard to find information on what organizations there are and so we thought it would be a good time to highlight the many great non-profits that we have here in town and try to get more of our community members involved in those as well,” she said.

Key said MainStreet picked Thursday’s so they wouldn’t have to compete with other Farmers’ Markets in southeast New Mexico.

“It’s a different evening that we can have for our community members and are visitors where they don’t have to pick and choose what they go to. They can do it all,” she said.

Saturday’s starting in June, Carlsbad area residents may want to venture to Artesia as the First Evangelical Presbyterian Church at 402 West Grand Avenue plans to host a Community Farmers Market.

It takes place every Saturday through September from 8 a.m. to 11 a.m. said Pastor Dan Phelps and Laurie Schotz, organizers of the market.

Phelps said the market is the church’s way of reaching out the community. He said church members offered to volunteer their time during the various Saturday’s.

“We encourage them to be intentional about meeting the vendors and meeting people that come onto the property and getting to know them and hopefully through building relationships that can go further in sharing the Gospel and maybe if some are unchurched to them to start coming,” he said.

Schotz said the Artesia market could meet multiple needs in the community as parishioners might pray for those who ask for it or aid the community’s less fortunate.

“Hoping with the vegetables, the foods and the baked goods at the end of the day if there’s any of that left over. Maybe Victory Life (Outreach) would like those. Maybe another place in town if the vendors would like to give it. It’s just about you coming to get your vegetables, it’s the vendors getting to know each other,” she said.

Schotz said the event is community wide, no matter what a person’s religious affiliation is.

“It’s about just being here for the community,” she said.

After dealing with COVID-19 restrictions for nearly a year, Phelps said the market offers people an opportunity to get outdoors and bond with fellow community members.

“Everyone has been so locked up and wanting fellowship and hopefully being outside it allows a little bit less angst maybe for those that are nervous about getting together in groups,” he said.

Schotz said the cost for vendors is $5 every Saturday.

“If you want to pay for the whole entire time (17 Saturday’s) it’s $50 and that’s a 40 percent savings. If you pay all at once then you’re going to save money and if you miss a few, you’re still saving money,” she said.