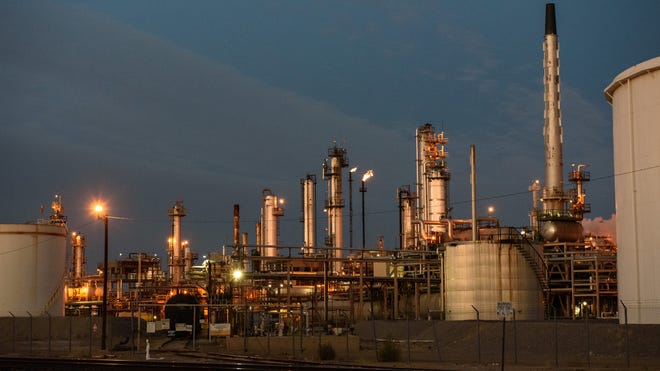 After two Permian Basin oil and gas producers merged earlier this year, they announced the formation of a new company

Shareholders from Cabot Oil and Gas Corporation and Cimarex Energy approved of the merger in September after the $9.3 billion sale of Cimarex’s assets to Cabot was announced in May.

And on Oct. 1, the combined company announced it would be called Coterra Energy, operating in the Permian Basin along with the Marcellus in Pennsylvania and Anadarko Basin in western Oklahoma and the northern Texas panhandle.

Chief Executive Officer Thomas Jorden, formerly CEO of Cimarex said the new company would increase profits for its investors by focusing on developing existing assets in the three basins where it operates.

In total, the combined company owned 700,000 acres in the three basins, with a production capacity of 605,000 barrels of oil equivalent per day as of the second quarter of 2021.

“We couldn’t be more excited to bring together our teams and form a new (exploration and production) company that is positioned to succeed in the next phase of the shale revolution and beyond,” Jorden said.

“With tremendous flexibility between premier oil and natural gas assets and a focus on operating efficiently, driving substantial cash flows and generating capital returns through commodity cycles, Coterra is poised to deliver enhanced value to our shareholders.”

He said combining the companies would increase its scale and allow Coterra to weather shifts in the fossil fuel demands and changing price markets.

“Our combined business will have top-tier assets that will generate substantial cash flow to drive peer-leading returns through commodity price cycles. We look forward to completing this transaction and delivering these compelling benefits to our shareholders.”

CEO of Cabot Dan Dinges, who will now serve as executive chairman on the company’s board of directors said closing of the sale created a diverse company that will continue to create strong returns.

“We are pleased that Cabot shareholders recognize the considerable opportunities ahead for our combined business,” Dinges said. “We are excited to build on this momentum and our strong foundations as we progress towards closing the transaction and creating a premier, diversified energy company.”

The merger followed a trend of multi-billion-dollar acquisitions among U.S. oil and gas operators in the wake of the COVID-19 health crisis, after the pandemic and subsequent restrictions on travel and business operations caused an historic decline in fuel demand and energy prices.

Energy companies sought to drive up investor returns through fiscal discipline rather than maximizing production, as the world market recovered from the pandemic.

As of Wednesday, the Chicago Mercantile Exchange reported domestic oil was trading at about $77 per barrel, surpassing 2020’s peak of $62 per barrel that January before the pandemic struck the U.S. the following March, per historical data from Nasdaq.

The latest price was the highest since 2018, when onshore oil and gas last boomed amid expanded use of hydraulic fracturing and horizontal drilling in the U.S., records show.

Wednesday’s price was also the highest since 2014, when prices climbed to the triple digits, peaking at $106 per barrel that June.

Analysts contended the upward momentum in oil prices was brought on by the Organization of Petroleum Exporting Countries (OPEC) refusing to increase production despite calls from the U.S. to help address drastically increasing fuel demand as COVID-19-related restrictions were lifted.

Consumption in that region was expected to double from 2020 to 2050, the report read, outpacing production in those countries and forcing more imports from the Middle East and U.S.

“The fast-growing economies in Asia could combine to become the largest importer of natural gas and crude oil by 2050, given their significant increase in energy consumption,” said EIA Acting Administrator Stephen Nalley.

That growth in fossil fuel-based energy consumption could also lead to increases in air-polluting emissions, the EIA contended, even as energy-producing countries pushed policy aimed at growing renewable energy sectors like wind and solar.

“Even with growth in renewable energy, without significant policy changes or technological breakthroughs, we project increased energy-related carbon dioxide emissions through 2050,” Nalley said.