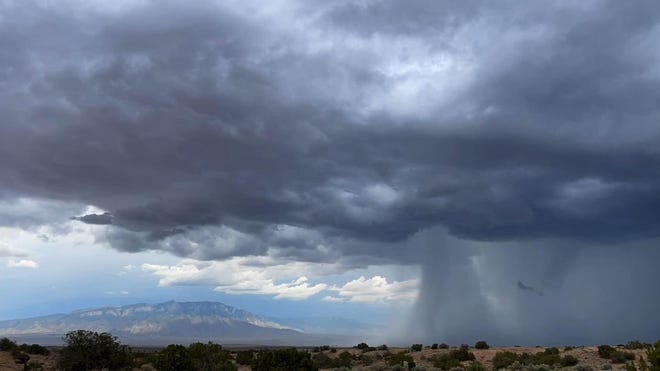 Farmers and ranchers in southeast New Mexico are not declaring victory from drought yet, even though heavy summer monsoon storms were reported continuously since late spring.

Powerful rains throughout the summer led to flooding in Carlsbad and throughout the region, causing weather experts to suggest the region was moving beyond a more-than-year-long drought that imperiled agriculture producers and choked the region’s vegetation.

Matthew Johnson, meteorologist at the National Weather Service Midland-Odessa Office said the region appeared in recovery from drought based on recent rainfall.

The latest report from the U.S. Drought Monitor showed drought conditions had receded from much of eastern New Mexico as of Sept 14, including the southeast region.

Extreme drought conditions, the fourth class, continued to be reported in the southwest and northwest regions of the state.

“I would say we’re coming out of drought in southeast New Mexico,” Johnson said. “We’ve had a very active monsoon season. Arroyos are filling up. They keep downgrading the drought.”

Johnson said the active monsoon season was brought on by a northern ridge drawing moisture to the region, along with tropical patterns making their way into New Mexico.

He said that meant heavy rainfall was spread out through the spring and summer and would likely continue for “a few more weeks.”

“That allowed the monsoon patterns to pick up. We even had a few tropical patterns come in that brought more precipitation. It’s just been very active in bringing more moisture to the area,” Johnson said.

“You kind of want it spread out over time and that’s what we’ve seen since May.”

The Carlsbad Irrigation District (CID) remained wary that devastatingly-low water levels last irrigation season would continue to impact farmers and ranchers this year as many had to cull herds or set aside land from production.

At the beginning of the irrigation season in March, the CID reported an allotment of 0.25 acre feet (AF) for its members – hundreds of rural users including farmers and ranchers in southern Eddy County along the Pecos River.

While recent rains allowed the allotment to be raised to 1.17 AF it was still less than a full allotment of 3.69 AF.

More:‘It will be a struggle’: New Mexico to get hotter and drier in next 50 years

An acre foot is a unit of measurement equal to the amount of water needed to cover an acre of land one foot deep.

The allotment is the amount of water farmers and ranchers are provided by the CID to irrigate their land that many feet deep per acre.

CID Board President Gary Walterscheid, who himself farms about 2,000 acres in the Otis area south of Carlsbad, said that while the rains provide hope for many in the area, the District is still contending with water scarcity concerns as its most recent allotment was far less than ideal levels.

He said the CID had to cut off its irrigation canal that brings water to its member five times this year due to low water availability.

“Our drought is still here if you’re looking at a farmer’s view of it. We’re still in it. Even though we got those monsoons that helped us late in the season, it’s still a short supply of water,” Walterscheid said. “Even though things look pretty green right now, we’ve got to rely on fall and winter weather for some water.”

During the past dry season, Walterscheid said grass dried out and had not adequately recovered to feed livestock and recoup losses, while this year’s alfalfa crop was likely to suffer after months of inadequate irrigation.

Even worse, he said the heavy, sporadic rains that define the monsoon can bring cutworms to the crops.

“A lot of ranchers’ grass have died out,” he said. “A lot of people are farming only 50 percent of their land. We didn’t get that water early.”

Walterscheid said the region typically runs in cycles with four to six years of good monsoons, but then two or three years of drought.

That makes it hard to plan planting of alfalfa, he said, especially during a drought season when water availability is uncertain.

He said all farmers can do is be optimistic that the rains will come and stay.

“You’ve got to think there’s going to be more rain. We’re gamblers out here,” he said. “It makes it awful difficult when you don’t have water because you can’t grow anything.”

More:Access to New Mexico rivers could be restricted to protect Texas hornshell mussel

“It will affect irrigation next year. If we have some good rain events and a good snow melt it might change,” he said. “I still consider us in drought mode. I wouldn’t say desperation but there are still concerns.”

And even if heavy rains continue to fall for the coming weeks, Boatman said farmers and ranchers will never recoup what they lost during an extremely dry 2020.

He estimated CID water users lost about five or six months of harvest due to last year’s drought.

More:Drought to persist through 2021. New Mexico pumping to offset water losses in Carlsbad

“Unfortunately, the damage was already done. They just can’t recover from that. The reality of it is they will never recover from it,” he said.

“We’ve been able to add allotments as we’ve had these rain events. Local people get the sense that the drought’s over. Locally, that might be true, but from CID’s standpoint we’re still considering ourselves in a drought.”

Earlier this year, the CID made a priority call in an attempt to protect its customers from the ongoing water scarcity ahead of the summer monsoon.

Boatman said the priority call is still under negotiation, despite an uptick in water levels, between the CID, Office of the State Engineer and junior rights holders along the river.

He said a “positive outcome” of the discussions would protect water allotments for all rights holders, but that the CID must work to support its members.

“We’re still working with the state engineer. That communication is still open,” Boatman said. “We’re hoping to have a positive outcome.”