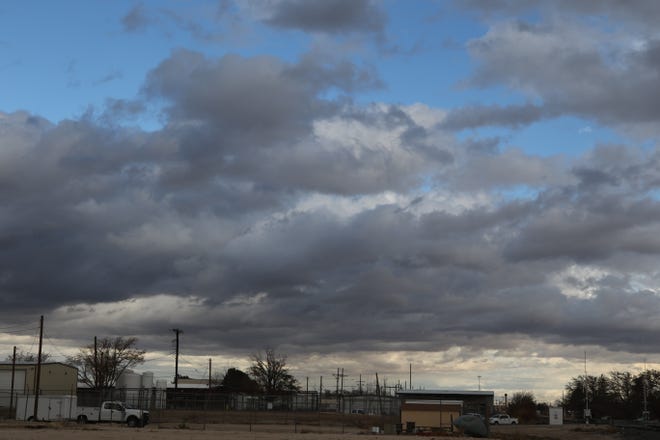 Southeast New Mexico’s parched desert could be getting a much needed gulp as rain was predicted through the weekend and early next week.

Increasingly severe storm weather was forecast to continue in the region after heavy storms were reported last weekend.

A weather pattern stretching from Carlsbad, through eastern New Mexico and as far north as Kansas Monday night saw heavy thunderstorms and tornadoes from the Rocky Mountains.

Southeast New Mexico, including Eddy and Lea counties, was included in a tornado watch on Saturday that encompassed parts of West Texas, but no touchdowns were confirmed in the area and the watch was withdrawn that night.

Large-sized hail was reported to have fallen in parts of Eddy County and throughout the area, but the severe weather appeared to subside early this week with the National Weather Service forecasting mostly sunny conditions Wednesday and Thursday with highs of 96 and 98 degrees, respectively.

But Friday could bring more storms with a 20 percent chance in the evening and a high of 93 degrees.

More:Extreme winter weather in Permian Basin could cause spike in oil and gas emissions

The threat of thunderstorms will continue that evening with a low of 63 degrees, and resume Saturday which had a high of 92 degrees and Sunday when the temperature was predicted to dip slightly to a high of 88.

Storms were predicted to continue Thursday through Tuesday, per the release, with the impacts becoming widespread in the region by Sunday and Monday.

“Strong to severe thunderstorms remain possible each day, especially across the eastern half of the area. By Sunday and Monday, much of the region could see strong to severe storms,” the report read. “Damaging wind and large hail will remain the primary concerns through the next week.”

Greg Murdoch, senior forecaster at the National Weather Service’s Midland Odessa Office said the storms were brought on by a shifting “dry line” – a border between dry and moist air where storms tend to congregate.

He said southeast New Mexico would see dryer weather in the coming days as the dry line shifted east, but it was expected to return over the weekend, potentially bringing storms from Friday to Sunday and continuing into the following days.

“Sunday, we’re looking at those conditions returning and they could persist for the next few days,” Murdoch said. “We’ve had a pretty active dry line for the past few weeks. Storms have been forming around that which is pretty typical for this time of year.”

But late May was early for storms as far west as Carlsbad and Hobbs, Murdoch said.

Such weather was usually expected in late spring and early summer, he said, taking hold of the region in June.

“To be getting storms this far west, it’s a little on the early side,” Murdoch said. “As you get further into spring, southeast New Mexico gets wetter.”

A monsoon, or summer rash of heavy downpours and storms, was expected this year, he said, after not materializing in the last two years.

It was expected to hit southeast New Mexico in late June and set in by the end of June and early July in the southwest region of the state.

“The general thought is there will be one,” Murdoch said of the monsoon.

And the monsoon would be instrumental in defeating a perilous drought spread throughout the state and region.

Murdoch said that while recent weather was encouraging, New Mexico would need months of consistent moisture for the drought to subside.

“It’s making a dent in it (drought), but a small dent,” he said of the rains. “We’ll need persistent rains to bring southeast New Mexico out of it. The monsoon will need to develop.”