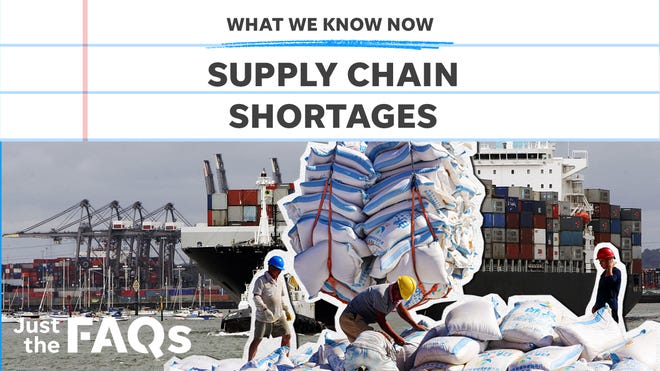 As supply chain issues have delayed shipments all over the country, New Mexico schools have also been affected, impacting some of their day-to-day operations.

Schools in Las Cruces and Albuquerque made headlines after shortages in certain food items forced them to change their breakfast and lunch menus in October.

Dillon said the district has worked with its food suppliers and even though there have been some shortages, they have not affected school menus.

The district has been trying to complete roofing projects, but materials aren’t expected to arrive until January. Dillon said the increasing cost of steel has also caused setbacks.

“Unfortunately, it is like this across the board in all disciplines of construction including HVAC equipment, furniture equipment and all construction materials,” Dillon said.

According to an article published by the White House, roughly 60 percent of manufacturing and construction businesses experienced supplier delays.

A survey published in May, by the National Association of Homebuilders found there were shortages in materials such as framing lumber, wallboard and roofing supplies.

CMS has also faced delays in technology purchases. The district was supposed to receive a shipment of new Chromebooks before the school year started, but it did not come in time leaving schools scrambling to work with what they had.

“Computer equipment has seen availability shortages due to the overall chip shortage due to a factory fire and also due to the heavy demand to accommodate remote learning and remote working across the country,” Dillon said.

According to the U.S. Department of Commerce, COVID-19 forced foreign factories to shut down as the demand for technology surged leading to a global shortage of semiconductor chips

In response, legislators introduced the CHIPs for America Act, which aims to incentivize domestic semiconductor investment.

What we know:How microchip shortages are impacting car prices and the tech industry

Dillon said the district, like most of the country, also faced PPE shortages early on in the pandemic but has not had any more issues since.

Dillon said he expects shortages to continue until 2022 or 2023.

Claudia Silva is a reporter from the UNM  Local Reporting Fellowship. She can be reached at [email protected], by phone at (575) 628-5506 or on Twitter @thewatchpup.r