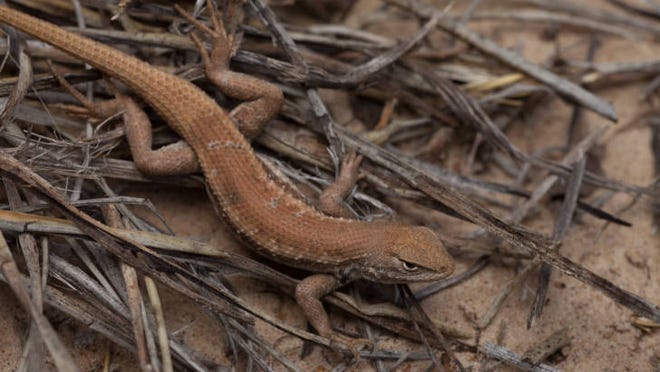 Jaguars will not be reintroduced into New Mexico yet after the U.S. Fish and Wildlife Service opted to remove the proposed acreage in the state from the species’ critical habitat.

The decision did not affect acreage in neighboring Arizona that was deemed necessary for the jaguar’s survival from extinction and future range expansion.

The Service announced Wednesday it was removing only the New Mexico acreage from the 764,207-acre critical habitat designation meant to conserve land needed for restoring the jaguar.

That meant the critical habitat for the jaguar would shrink by an estimated 59,000 acres in the San Luis and Peloncillo mountain ranges in Hidalgo County in the southwest New Mexico boot heel.

The Peloncillos also run into Cochise County in western Arizona, and that acreage was unchanged by the ruling. Four other areas still to be used as habitat for the jaguar were mountain ranges in Cochise, Pima and Santa Cruz counties in Arizona.

The move was meant to comply with a January decision by the 10th Circuit Court of Appeals implemented by New Mexico District Court, in response to a lawsuit filed by the New Mexico Farm and Livestock Bureau, New Mexico Cattle Grower’s Association and the New Mexico Federal Lands Council.

The appellate decision from Circuit Judges Carlos Lucero, Scott Matheson and Harris Hartz contended no jaguars occupied the areas in New Mexico at the time of the species’ listing as endangered in 1972.

“Although we acknowledge the difficulty in ascertaining whether jaguars were present in Units 5 and 6 (in New Mexico) in 1972, we conclude that any finding that jaguars occupied the Units at that time is speculative and not based on substantial evidence,” read the decision.

“We therefore agree with the district court that the Service’s designation of Units 5 and 6 as occupied critical habitat was arbitrary and capricious.”

Michael Robinson with the Center for Biological Diversity, which entered the case as an intervenor and sought to maintain the initial habitat said habitat for the jaguar should go beyond where the animal was known to dwell and include areas it could thrive in in the future.

About 99 percent of the jaguar’s present known habitat is in Central and South American, but Robinson argued it once lived throughout the U.S, as far west as California and far east as the Carolinas.

Work to recovery the species should include areas throughout North America where the jaguar could not only survive but be recovered to its historic range and population, he said.

“It’s not just about these small areas right along the border that are critical for the jaguar but are inadequate for its recovery,” he said. “Jaguars are native to North America and evolved on our continent before they move southward to central and south America.”

“When an area is designated as critical habitat, the federal government is not allowed to take any action to harm that species,” he said. “Now that designation has been removed, we’re concerned the federal government will not go through a review as to if their activities will harm those mountains’ ability to conserve jaguars.”

More:New Mexico plants threatened by oil and gas to be reviewed for federal protections

Recovering the species should not just include preserving the minimum amount of land for a species’ survival, but include areas where the range could be expanded, Robinson said, to see populations continue to regrow.

“When we’re talking about recovery, we need to talk about what it’s going to take to see the range not continue to shrink,” he said. “We need to look into parts where it used to live, could it practically live. The ranges of the Peloncillo Mountains are one possibly where the jaguars could broaden and recolonize.”

The Center’s next recourse would be to take the case to the Supreme Court, which was unlikely, Robinson said.

He said conservationists would continue to try to find ways to conserve the jaguar and see it ultimately repopulate through the U.S.

Chad Smith, chief executive officer with the New Mexico Farm and Livestock Bureau said the exclusion of New Mexico lands from the jaguar’s recovery was a “victory” for private landowners in the southwest region of the state.

He said he doubted if jaguars could survive in the arid American Southwest, arguing they needed more tropical climates in Central and South America.

Smith said increasingly arid conditions in New Mexico meant decisions between agricultural development and conservation could get tricky as farmers and ranchers struggle for water and the state’s wildlife is also choked by drought.

“Especially because we’re in a severe drought, we’re going to start having these hard conversations about whether to produce a local food, fuel and fiber or conserving species,” he said. “We’re not opposed to conservation by any means. We’re an important part of that, but we also have to be smart about it.”