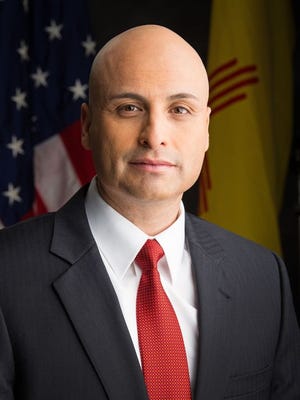 The project was proposed by New Jersey-based Holtec International and would be designed to hold spent nuclear fuel rods from plants across the country temporarily while a permanent repository was designed and built.

A permanent repository for high-level waste does not exist in the U.S. after such a project at Yucca Mountain, Nevada was blocked by state lawmakers and de-funded during the administration of former-President Barack Obama.

Balderas also argued that with no permanent repository available in the U.S., the Holtec site could become the permanent resting place for high-level nuclear waste.

NRC spokesman David McIntyre said the agency does not comment on pending litigation.

Supporters of Holtec’s project pointed to the economic benefits it could bring to southeast New Mexico, arguing the project would result in a $3 billion capital expenditure by the company to the region, and create up to 400 jobs between the site itself and manufacturing plant to build steel casks to hold the waste in storage.

But the facility could pose a risk to the environment and human health, opponents argued, and could expose the local area to radiation if an accident occurred whether at the site or during the transportation of the waste via rail into New Mexico.

New Mexico Gov. Michelle Lujan Grisham was a frequent opponent of the Holtec project since taking office in 2019, along with U.S. Interior Secretary Deb Haaland who voiced her opposition in 2019 while she represented New Mexico’s First Congressional District in the U.S. House of Representatives.

Along with concerns for pollution and public health if the facility was to be built and operated in the high desert of southeast New Mexico, Balderas also said Holtec could endanger other nearby industries such as oil and gas extraction and agriculture.

The proposed location for the facility was in the oil-rich Permian Basin, one of the world’s most active oil and gas fields which stretches from southeast New Mexico to West Texas.

In the complaint, Balderas alleged the NRC was acting outside the scope of its authority by proceeding with federal licensing for the facility without the state’s approval and argued it was unfair for local New Mexico communities to shoulder responsibility to retrain emergency personnel in the event of an accident at the site.

Balderas’ complaint sought for a judge to determine the NRC illegally proceeded with the licensing process, and enact an injunction preventing the project from moving forward through the approval process.

In March 2020, the NRC issued and environmental impact statement (EIS) which found the project would have “minimal” impact on the environment if built and operate through multiple phases.

The complaint argued the EIS ignored the cumulative impact of the site and that the opposition of State leaders was unduly ignored during the NRC’s licensing process.

It also pointed to federal law that barred the federal government from taking ownership of the waste as could be needed while the waste is transported from utility-owned nuclear power plants to the proposed site in New Mexico, arguing Holtec’s licensing application provided no solution to the alleged contradiction of the Nuclear Waste Policy Act.

“In light of its aggressive promotion of the use of nuclear power (which in turn generates new high-level waste requiring long term storage and/or disposal), NRC has begun to promote the idea of long term consolidated interim storage of high-level radioactive waste in New Mexico, without its consent or consideration, when the State itself has no operating nuclear power plant,” the complaint read.

“A multitude of entities have expressed objections to multiple rounds of SNF transport, which creates ‘unnecessary risks to public health, safety and the environment’ and places a heavy burden on the infrastructure of the State and its resources.”

Read the State of New Mexico’s lawsuit against Holtec International.