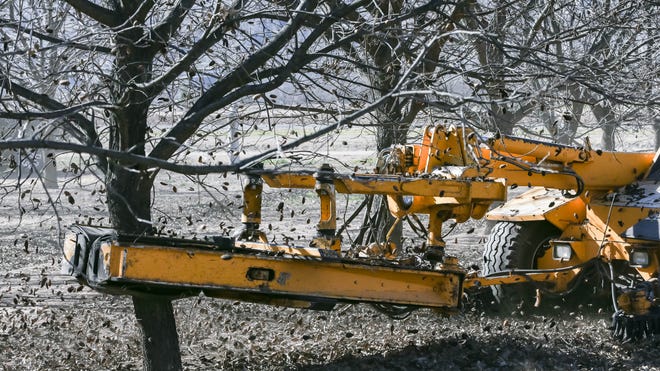 Pecan growers in New Mexico hoped proposed changes to a statewide quarantine of a nut-damaging weevil could help product the state’s nation-leading industry.

The quarantine, first enacted in 2017 today applies to only Eddy, Lea and Chaves counties in southeast New Mexico where the bug is believed to persist.

To ensure the safe transport of pecan weevil from quarantined areas into counties believed free of the pest, New Mexico required additional certification and treatment typically using cold storage to kill the bug.

The proposed changes to the quarantine would allow southeast New Mexico shippers to ship from quarantined areas through multiple Texas counties on route to El Paso processing facilities or those in Dona Ana County.

These routes are often preferred as quicker and less expensive to growers in the southeast corner of the state, said Ryan Hiles, assistant director of entomology and nursery industries at the New Mexico Department of Agriculture.

The changes would also allow shipments from Texas growers in the specified counties: Culberson, Jeff Davis and Presidio along with presently allowed El Paso and Hudspeth County in Texas and the states of Arizona and California.

All other U.S. states are under the quarantine and pecans are restricted from shipment into New Mexico.

A public information meeting on Nov. 15 was recently cancelled and was planned to be rescheduled to solicit feedback on the proposal.

“We know some of the shorter routes go through Texas. We have shippers that we know want to ship into El Paso and Hudspeth counties into treatment areas,” Hiles said. “This allows for a potential agreement between New Mexico and Texas. That just helps facilitate that.

“There were some opportunities the southeast New Mexico people had before the quarantine went into place and we’re trying to open that back up again.”

Hiles said eradication efforts were showing success and the proposed changes to the quarantine were intended to support pecan trade in New Mexico as the threat from the weevil appeared to subside.

The proposed changes also added an additional option for cold storage, which kills the weevil.

Under the present rules, pecans must be stored at 0 degrees Fahrenheit for seven days to be considered treated in cold storage. The proposal added language that would allow for storage at 12.2 degrees for 14 days for the pecans to be considered safe.

The change in temperature could be helpful to growers, Hiles said, who often have cold storage facilities onsite at their farms but struggle to get cold enough – especially during the summer.

“What we’re trying to do here is by allowing Texas to ship in directly to cold storage in New Mexico, from a quarantined area. We would basically be setting up compliance agreements in ensuring it would be going to a cold storage facility into the proper treatment facility,” Hiles said. “It also opens the door for our southeast New Mexico counties to ship into basically El Paso.”

This would help keep regulations between Texas and New Mexico consistent, he said, while making sure interstate trade was safe from the pest.

“That’s really the big intent with the rule change,” Hiles said. “It’s really trying to align the rulemakings for better trade of pecans and doing it while still protecting our pecan weevil-free areas. It allows for a source of trade that’s safe to the state.”

The weevil burrows into the pecan nut’s shell, consuming the nutmeat and making them unsellable.

Between 2016 and 2017, the weevil was found in several residential areas and believed to risk spreading into some larger, commercial grow operations.

This could lead to increased costs due to the needed use of insecticides and lost revenue from weakened sales, read a report from New Mexico State University’s College of Agricultural, Consumer and Environmental Sciences (ACES).

“If pecan weevil becomes established in the state’s commercial orchards, it would cause increased insecticide applications, increased production costs, reduced on-farm revenue, and a perceived reduction in the state’s reputation for high-quality pecans,” the report read.

Jane Pierce, an associate professor and extension entomologist at NMSU’s Agricultural Science Center in Artesia said the weevil’s presence in backyard orchards made it especially difficult to eradicate.

She said eradicating the boll weevil was easier as it was only present in commercial farms easier to regulate.

There could be some hope, she said, as the pecan weevil only feeds the nut and thus eradication efforts could be more targeted. The U.S. recently announced full eradication of the pink bollworm, which Pierce said was possible in the Pecos Valley as that pest only fed on cotton.

“You really can’t eradicate insects that feed on a variety of host plants especially if they feed on weeds,” Pierce said. “When they feed on only one or two hosts that are commercially grown it’s a possibility.”

Full eradication of the weevil in New Mexico could take up 10 years, Hiles said, as the bug hibernates underground for three years at a time.

In the meantime, he said the NMDA hoped to restore some opportunities for New Mexico growers in support of growth in crop production.

“It’s catching them once they emerge and making sure we’re treating it at the right time,” Hiles said. “Because it’s a long term project for eradication, we wanted to provide as many opportunities as we can for people in those areas to get their pecans to market and do it safely.”

Supporting New Mexico’s industry was important, he said, as an economic driver for agriculture – one of the state’s key industries.

New Mexico was the second-highest producer of pecans in 2020 and was forecast to hold that spot this year, per statistics from the U.S. Department of Agriculture.

That meant New Mexico led the nation in pecan production for the next two years, producing 89.1 million pounds in 2018 compared with Georgia’s 70 million pounds.

The year before the hurricane hit, Georgia led the nation with 81 million pounds of pecans produced compared to 79 million from New Mexico.

But regardless of the national state rankings in pecan production, data showed New Mexico’s industry held an upward trend year over year, and Hiles said the NMDA must protect the sector from the weevil while also encouraging trade of the one of the state’s most-produced cash crops.

“They do provide a significant economy to New Mexico. That’s really one of the biggest things,” he said. “Basically, protecting one of the largest pecan-producing areas, if not the largest in the country, from the pecan weevil that can reduce production significantly.”

Phillip Arnold, president of the New Mexico Pecan Growers Association and himself a grower for Chase Pecans in the Las Cruces area said the proposed changes, which the association collaborated with NMDA on, would loosen restrictions on transportation of the nut while continuing to protect non-infested areas from the weevil.

“You don’t want to be too restrictive,” he said. “We’ve had problems with it (the weevil) being brought in. We’ve had an ongoing thing in the state. They’ve been eradicating it and been successful. We’re not trying to penalize people in eastern New Mexico.

“If there’s someone who wants to bring them into Texas and follow the requirements, they should be allowed to do that. If they do that, the pecans are free of pests and they can sell them wherever they want to.”

Arnold said he expected New Mexico’s pecan production this year to approach 100 million pounds, making it important to facilitate free trade of the nut while maintaining protections from the weevil.

“This could become the biggest production year New Mexico has ever seen. It’s been a boon for the economy,” he said. “It’s one of the agricultural commodities that has had value. We’re just trying to protect that industry.”