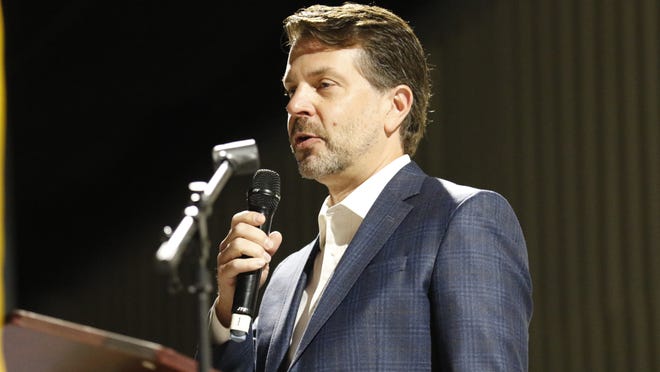 Southeast New Mexico saw some of is highest oil production in the last decade, with the most barrels of crude oil reported produced in 2021 in the history of the region, said Hanson Yates, president of Artesia-based Santo Petroleum.

Santo is drilling two new wells in the Carlsbad area, Yates said, and planned to continue targeting the region for future growth.

At the Carlsbad Mayor’s Energy Summit Thursday, Yates rallied for fossil fuel production in the region encompassing parts of Eddy, Lea, Chaves and Roosevelt counties, calling for expanded domestic operations centered on the Permian and the western Delaware sub-basin.

More:Oil and gas industry plans to defend itself against ‘prohibitive’ policy in New Mexico

He said heightened growth in the Delaware, which covers southeast New Mexico’s portion of the Permian, began in the 2010s when horizontal wells were half of about 11,000 new wells drilled that decade.

“In the 2010s, southeast New Mexico began a time of increased growth in oil and gas,” Yates said. “It’s really a golden age.”

Two years into the 2020s, Yates said growth was expected to continue and could even overtake the “golden age.”

More:Solar farm to power Chevron’s oil and gas operations near Carlsbad to be complete by December

The last eight years were the eighth most productive in southeast New Mexico’s history, Yates said, and 2022 could already be considered the fourth-most productive year with more than two months left.

Last year, the basin in New Mexico averaged up to 1.5 million barrels a day, he said, tripling since 2017.

New Mexico also grew to produce about 13 percent of U.S. oil and 1 percent of the global supply, Yates said.

“The story of strong year after year growth in production has continued,” he said. “This decade is set to be the highest production decade in southeast New Mexico’s history.”

Recently enacted regulations by the State of New Mexico to limit air pollution emissions from both oil and gas production could result in “cleaner” fossil-fuel based energy, Yates said.

“New Mexico is set to be producing some of the cleanest barrels of oil and cubic feet of natural gas in the world,” he said. “New Mexico has a tremendous, reliable and bountiful clean source of oil and gas. We should be prioritizing domestic production from right here in New Mexico.”

During a panel discussion later in the Summit, a group of executives from some of the Permian’s largest operators advocated for the region and policy to allow it to continuing growing while curbing environmental impacts.

Moderator and Eddy County Manager Allen Davis said the recent policy shifts risk energy companies choosing to operate in other states like neighboring Texas – the U.S.’ leader in oil and gas production which shares the Permian with New Mexico.

“These hydrocarbons are world-class assets,” Davis said of fossil fuels from southeast New Mexico. “But some of our (New Mexico) policies would have us going elsewhere for these resources.”

John Raines, vice president of Devon Energy’s Delaware Basin Unit said New Mexico’s tougher regulations could “get in the way” of the nation-leading oil and gas production he said occurred in the southeast region.

“I don’t think it’s any secret that New Mexico’s regulatory environment is more robust than other states,” Raines said. “As we go forward, we have to work forward and have a seat at the table to make sure these regulations are fair and balanced. We have a tremendous resource and we can’t let politics get in the way of that.”

Despite policy concerns at the state level, Brian McGowen, Permian development manager with XTO Energy – ExxonMobil’s onshore subsidiary – said the company was committed to southeast New Mexico and that the Permian accounts for about 40 percent of its upstream production volumes.

He pointed to XTO’s recent buyout of southeast New Mexico oilfield operator BOPCO in 2017, doubling the company’s Permian Basin by adding about 3.4 billion barrels of capacity in New Mexico’s portion of the Permian.

“Our actions speak louder than our words,” McGowen said. “We’re committed to the Permian, and you see it as we bought in.”

She said an obstacle to that could be challenges like long wait times for permits and other approvals at both the state and federal level, calling for required timelines to be written into permitting policies.

“I think we really need to be talking about regulatory reform here in New Mexico,” Steel said. “As we’re trying to be good stewards of our environment, we need timelines so we can plan and move our businesses forward.”