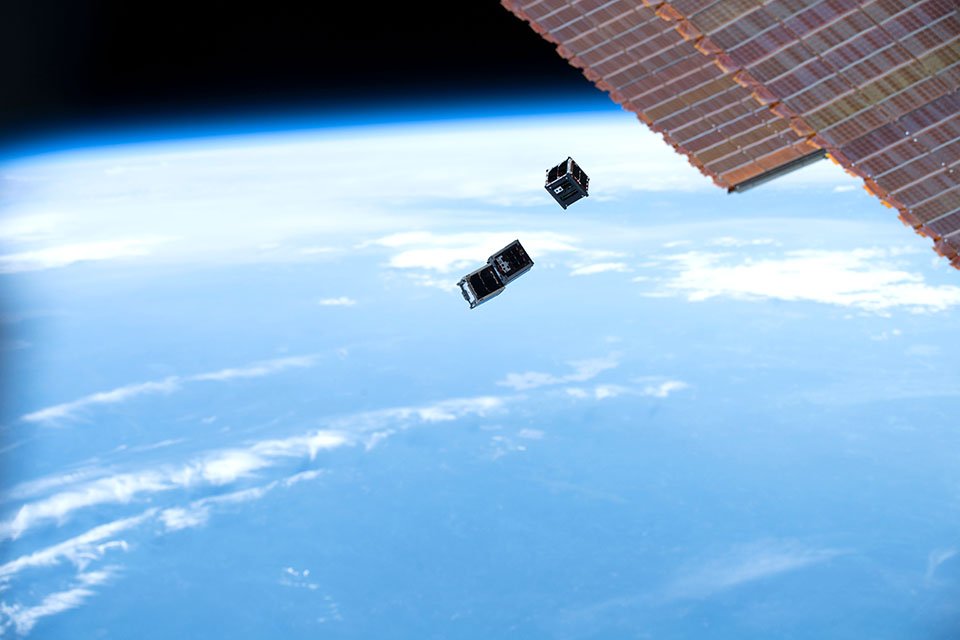 “We have seen explosive growth in the industry,” said Kevin Lynaugh of Vulcan Wireless, a Carlsbad company that develops radios and antennas for satellite communications. “On every rocket launch we are seeing dozens of small satellites, or more, inserted into low earth orbit.”

“We can think of space as being an ocean, with another ocean just a few feet above it, and so on,” he said, referring to incrementally larger orbits.

While some worry about accumulating space debris, prognosticators see huge room to expand, not least with more satellites.

Of a $366 billion global space industry in 2019, the satellite sector accounted for $271 billion, including services, ground equipment, manufacturing and launch, according to the Satellite Industry Association. The number of operational satellites increased by roughly 75% between 2015 and 2019.

SpaceX’s mainstreaming of reusable rockets “is the equivalent to the day after the invention of the railroad or the commercial airliner,” said Rick Tumlinson of SpaceFund, a venture capital firm. The reason being that reusability should greatly drive down a customer’s cost to put a payload in orbit.

With little more than cellphone components, companies could launch lots of little satellites, rather than the super expensive larger satellites of the past, Robert Jacobson writes in his 2020 book, “Space Is Open for Business.”

Such companies could include service providers and manufacturers of all kinds, not just those in the aerospace niche.

In “the growing economy around the Internet of Things, … you’re sending data back and forth from things on the ground that are in cars or ships, or the blender in your house, or whatever needs to communicate to the internet,” said Dave Streich of Parabilis Space Technologies, a San Marcos firm that makes a rocket upper stage for small payloads. “Sometimes a really cheap way of doing that is to just put up a small satellite in orbit.”

“It’s just a better business model to do things small and cheap that you can update and essentially replace on a frequent basis,” he said.

Moreover, “the future of space is much, much bigger than satellites,” in that cheaper launches would enable “the transportation of people and products up and down,” Tumlinson said.

For example, metallurgy in orbital microgravity could produce better blended alloys, whereas gravity complicates mixing metals of different densities on Earth, he said.

Indeed, Cobra Puma Golf, a Carlsbad-based golf club manufacturer, sent a commercial metallurgical experiment to the International Space Station a few years ago. The project examined “silver coatings and aluminum materials used in golf products,” also providing “insight that improves the development of stronger, lighter alloys for use on Earth,” according to NASA’s website.

The golf company recently put up another experiment to test various materials bonded with epoxy, said the firm’s Mike Yagley.

By some measures, the San Diego region is at the leading edge of the dubbed “New Space” industry.

Out of some 3,200 counties nationwide, San Diego County claims the fourth most inventors with patent applications containing the word “satellite” in the title or abstract, according to a Coast News analysis of patent data from 2020 to present. Over a third of these hail from North County specifically.

The county also claims the fifth most small firms receiving NASA commercial development grants from 2017 to present, according to data from the Small Business Administration.

“There is a good core of space companies here,” said Parabilis’ Streich. “Part of the reason is just the remnants of the large space presence that used to be here with General Dynamics.”

North County’s quality of life will help attract engineers from elsewhere, he said. His firm located in San Marcos in part because the city offers relatively affordable housing and accessible commutes.

But the region may also have untapped commercial space potential.

Asked what cities he foresees taking the lead in the space industry, SpaceFund’s Andrew Granatstein didn’t put San Diego at the top of his list. Instead, he pointed to L.A., the Bay Area, Seattle, Denver, Houston, Austin, Phoenix, Tucson, and Florida cities near Cape Canaveral.

Neither does he see the San Diego area’s universities taking the lead in space. Instead, he pointed to the Colorado School of Mines (“by far the leader in this regard”), Johns Hopkins, CalTech, Arizona State, and the Universities of Arizona, Colorado and Central Florida.

“No real space biotech cluster exists yet, (though) San Diego could be perfect for that,” he said.

UC San Diego and San Diego State “have great engineering departments that produce people that are capable of doing propulsion and aircraft type stuff,” said Streich. But “they don’t have coursework or lab work or clubs that are great for spacecraft systems.”