The eight women of the committee knew that golf tournaments were popular but also plentiful. A gala seemed too formal for SNAP’s grassroots community efforts. Bingo? Poker? Casino night? Nothing felt quite right.

“How about pickleball,” Brand asked.

There were a few seconds of silence, and then suddenly, everyone spoke. The energy in the room doubled, tripled. None of them knew anything about pickleball, yet all of them had heard something about it —something they now recalled with growing animation:

“My neighbors play pickleball; they absolutely love it,” one person said.

“I just read about it in the New York Times; it’s trending,” another remarked.

Some even had stories to relate.

“I met a man at a party last summer. Our conversation was routine, polite but dull. He was waiting for his wife to finish talking to a friend and mentioned needing to get home in time for a pickleball match. ‘What’s pickleball?’ It was like someone hit the guy’s ‘on’ button, and he could not stop talking. I don’t even remember half of what he said; I was so fascinated by the total change in his demeanor.”

Pickleball definitely has a buzz.

Invented in 1965 by three dads whose kids needed a new summer pastime, the sport now has more than 4.8 million players in the United States. It has grown at an average annual rate of 11.5% over the past five years, according to the 2022 Sports & Fitness Industry Association’s single sport report on pickleball.

Games are played with paddles and Wiffle balls on courts one-fourth the size of a tennis court. It’s popular with all ages, and newcomers can achieve enough mastery to enjoy the game in an hour or two.

Pickleball is exciting, accessible and wildly popular. So, could SNAP tap into that energy and use it to improve the lives of cats, dogs, rabbits, and the San Diegans who love them?

SNAP committee member Laurie Michaels offered to check out a pickleball club near her home and report back. Michaels’ reconnaissance proved to be the turning point.

Bobby Riggs Racket & Paddle in Encinitas is a local hotspot for pickleball. Situated near the freeway with 22 dedicated courts, lessons and events for all skill levels and a celebrated staff, the club is open to the public. While there are no memberships, the upbeat atmosphere and congeniality of the players and staff make it feel like a social club worth joining.

Much of that is due to pickleball guru Steve Dawson, a world champion of tennis and pickleball, entrepreneur and philanthropist. Dawson owns and operates the club with his similarly accomplished wife, Jennifer, and son, Callan.

Tall and tanned, with athletic grace and continually amused expression, Dawson takes meetings at a picnic table overlooking the courts, most of which are full. Players, dressed in varied athletic gear of no set type, stop to say hello on their way in or out. It is simultaneously relaxing and energizing to be here, and it’s easy to see why regulars visit three or four times a week.

At their first meeting, Michaels expressed an interest in reserving six courts for a SNAP fundraiser.

“Why not go big?” was Dawson’s response. He offered the whole club and suggested possible dates. “You put it together. I’ll do an email blast. You’ll fill our courts.”

The advisory committee selected Oct. 8 for the event and got busy planning Pickleball for the Pets, an evening of food, music, and sport. Guests can register to take a lesson, compete, or enjoy watching and experiencing the positive energy pickleball radiates. Raffles and a silent auction will add to the fun, and all proceeds will enable SNAP to help more animals.

Lee Posnock, who boasts a five-plus-days-a-week pickleball habit and a compulsion to introduce new people to the sport, stopped by to say hello and share her pickleball philosophy.

“I’ve bought twenty racquets for others because if you’re going to learn, you should learn with a good paddle,” Posnock said.

Michaels handed her a Pickleball for the Pets flyer, explaining how fundraising is especially critical for SNAP now, as the availability of low-cost spay and neuter has plummeted throughout the county and rescue groups are all at capacity.

Posnock lamented she would be out of town the day of SNAP’s event.

“But you know what? I’ll buy a paddle for your auction,” Posnock said.

Dawson caught the spirit and offered to sell her one of the highly regarded ProKennex paddles he had designed at cost and to autograph it. When they returned from the pro shop and presented it to the delighted SNAP volunteers, Posnock smiled.

“Helping is a gift,” Dawson said.

Event Information:
When: Oct. 8, 2022, 5-8 pm
Where: Bobby Riggs Racket and Paddle, 875 Santa Fe Drive, Encinitas, CA 92024
What: Pickleball round robin tournament, lesson clinic, and viewing party with a raffle, auction, music, food and fun.
Why: To help animals by supporting SNAP and have a lot of fun doing it.
How: Pickle Ball for the Pets Tickets

EDITOR’S NOTE: Betsy Denhart is a volunteer on SNAP’s advisory committee and an occasional contributor to The Coast News. 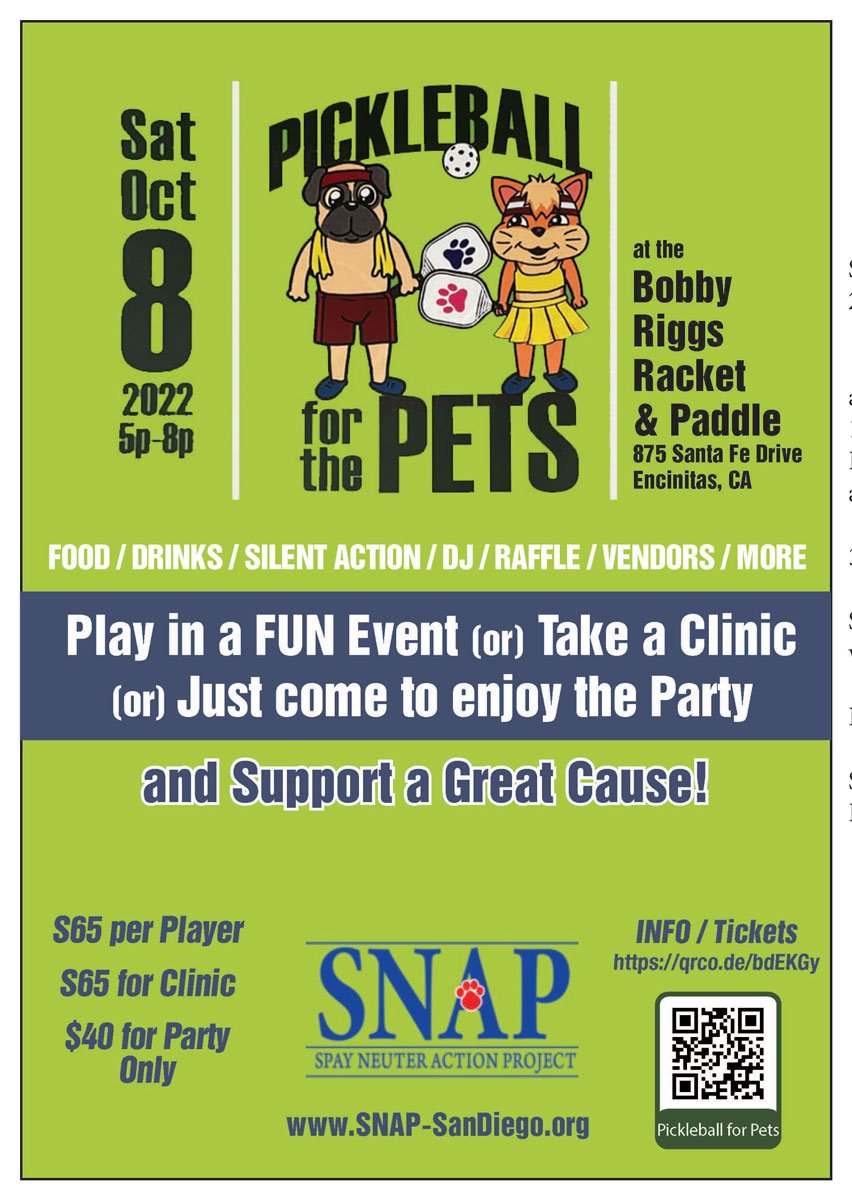