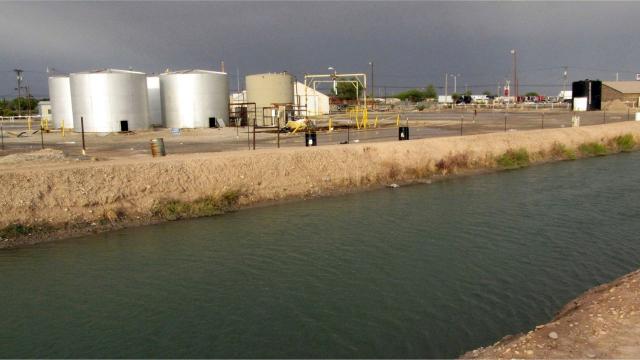 With $18 million secured from the State of New Mexico, City of Carlsbad and Eddy County the New Mexico Energy, Minerals and Natural Resources Department (ENMRD) hoped to resume operations at the Carlsbad Brine Well sometime this month.

Work at the Brine Well Remediation site south of Carlsbad was suspended in July 2020 after it was projected that available funds were insufficient to complete the project, ENMRD stated in a news release.

“This was because a significant portion of the cavern had failed more than 20 years ago resulting in a large void beneath the northern part of the site extending under U.S. Highway 285 as well as posing a threat to groundwater in the area,” the release cited.

Work at the site started nearly two years ago and sand filling replaced grout injections as an effort to maintain overall cost while providing equal stabilization. In the release, ENMRD stated the amount of material needed was tremendous with more than 170,000 cubic yards.

With funds in place, talks between ENMRD and the Brine Well contractor Wood Environment and Infrastructure Solutions are in the final stages, according to the release.

Once negotiations are finalized the Brine Well Remediation Authority needs to sign off on the contract.

“Anticipating approval, remobilization to Carlsbad has already begun and EMNRD plans to resume operations in September beginning with a sonar survey of the remaining void to determine whether there has been any significant change,” the release highlighted.

ENMRD anticipated backfilling operations complete in the spring of next year.

“EMNRD is glad that work is resuming at the site so we can complete remediation. We’re grateful to the State, City, and County for their financial support of the project. Ensuring remediation is complete has been a priority for the Department and we look forward to getting the project done to protect the water resource and community,” said Susan Torres, ENMRD spokesperson.

“The State press release notes a need for another sonar survey being needed before filling begins again, but our impression was that a sonar study was just completed prior to the shutdown,” he said.

Janway said the State should expediate a meeting of the Brine Well Authority and resume sand work as quick as possible.

“This project must be resumed again immediately,” he said.

State Sen. David Gallegos (R-41) represents Eddy and Lea counties, including the Brine Well area, agreed with Janway. He said the State needs to speed up the sandfill process.

“I’m just glad to see that they are continuing with the plan,” Gallegos said.

While work crews pulled out last year, ENMRD said the site was monitored and functioning during the pause of operations.

No significant ground movement or loss in cavern pressure was observed, the news release indicated.

“The contractors have been checking the site every few weeks and nothing has come up,” Torres said.

What is the Carlsbad Brine Well?

Located at the intersection of U.S. 285 and United States Highway 62/180 where the South Y converges. The Carlsbad Brine Well operated from 1978 to 2008 as a source of brine or salt-laden water for use in oil well drilling, according to ENMRD’s website.

“Fresh water was pumped into the subsurface to dissolve subsurface salt layers, creating a brine that was pumped out and trucked to the oil fields for use in drilling and completions. Removal of the salt created an underground cavity and a risk of collapse of the overlying ground,” the website read.

The New Mexico Oil Conservation Division (OCD) noticed the hazard in Carlsbad after two brine wells collapsed near Artesia in 2008.

“It has been estimated that a similar collapse at the Carlsbad Brine Well could cause in excess of $1 billion in damages, affected a main irrigation canal, a major highway intersection, a rail line, and multiple businesses and residences,” ENMRD’s website stated.