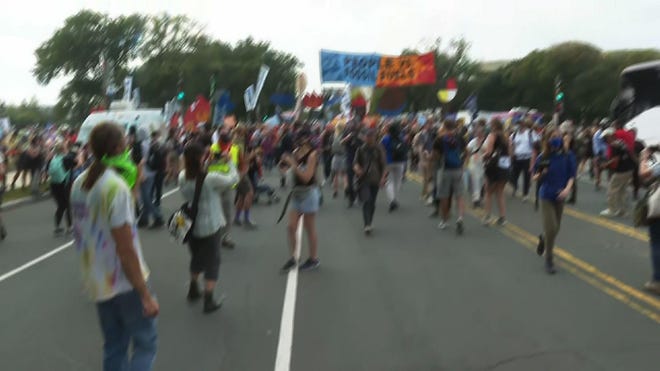 Farmers and ranchers in the Pecos River Basin of southeast New Mexico could be in for hotter temperatures and scarcer water in the coming years, per a recent study by the federal Bureau of Reclamation.

The Bureau released its Pecos River Basin study this week, holding a virtual townhall Wednesday to explain the results of the study that followed multiple possible scenarios for the region as far in the future as 2100.

All five of the models used in the study agreed on one thing: it’s going to get hotter and dryer.

Dagmar Llewellyn, manager of the study in the Bureau’s Albuquerque Office said the study was intended to predict future conditions along the river and devise strategies to address increasing demand and decreased water supplies.

Llewellyn said 80 percent of water use in the basin was from agriculture for irrigation, and 64 percent of that use relied on groundwater.

The groundwater source is fed by snowpacks in the mountains to the north, when snow gathers at high elevations, melts and feeds into rivers and streams.

But this year’s snowpack was lower than average, providing only 700 acre feet (AF) compared to the historical average of about 40,000 AF, Llewellyn said.

She said climate change and rising temperatures were to blame for the dwindling water supplies in the Pecos River Basin.

“Those challenges are significant,” Llewellyn said. “The Pecos Basin is already an arid basin. Drought and climate change-induced aridification is already ongoing in the basin.

“All of our models show that temperatures will continue to go up. Reducing irrigation consumption will help us in all of the futures (modeled in the study).”

To address the problem for future water use, Llewellyn said irrigation districts could reduce use by 20 percent by 2045 to 2055 by finding new ways to increase efficiencies in their water management and infrastructure.

More:‘It will be a struggle’: New Mexico to get hotter and drier in next 50 years

She said users could change to less-water-intensive crop types or install greenhouses to get more out of the water they use, in pursuit of the Bureau’s goal to see the districts increase water efficiency from 50 percent reported in 2010 to 75 percent by 2050.

“The ISC really believes this study is going to help with management of the water in the basin. There are challenges coming up in the future that will affect us all,” Scott said. “Hopefully this study will help us pivot and address those challenges in the basin.”

The study in the Pecos River Basin comes as the State of New Mexico published a draft analysis of its 50-year water plan last month, detailing statewide impacts to water supplies and seeking plans for mitigation in each region of the state.

Those findings were similar to the Bureau’s: hotter and dryer conditions will lead to less water for New Mexicans.

A public comment period on the draft closed Oct. 15 for the analysis that was intended to provide the scientific basis for the upcoming plan to guide management of New Mexico’s water for the next five decades.

The final plan was expected to be released next year.

Gov. Michelle Lujan Grisham directed that the State find ways to ensure its water resources are sustainable for the next half-century.

“The guiding principle is that the state charts a course that will allow for more flexibility in managing water supplies and infrastructure in the face of weather extremes brought on by a changing climate,” read the Bureau’s announcement of the draft plan’s publication.

Environmental groups were critical of the plan as they contended it did not adequately depict the impacts of climate change on the state’s waterways, imperiled species or outdoor recreation.

In public comments filed by Santa Fe-based WildEarth Guardians, the group said the analysis should be amended to include all potential water uses, arguing the draft only contained an examination of agricultural, industrial and municipal sectors.

“Governor Lujan Grisham identified the need to center equity, stewardship, and sustainability in the 50-year water planning process. “If we’re serious about that, impacts to the environment, the quality of life it facilitates for all New Mexicans, and the recreational economy it supports must be included in the scientific foundation of the plan.”