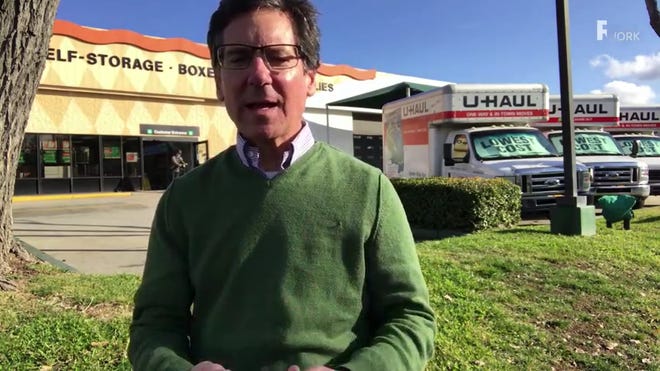 Demands for secure self-storage units and moving services prompted U-Haul to build a facility in Carlsbad.

July 1 the Phoenix, Arizona- based company acquired property west of South Canal Street and U.S. Highway 62/180, a news release from the company stated.

The company, founded in 1945 in Ridgefield, Washington, planned a three-story storage center which would sit on 6.23 acres and should open by next year, read the release.

More:City of Carlsbad and CDOD agree on economic development extension

“Back in 2018 I assisted them with property searches for this project,” he said.

The 100,000 square foot Carlsbad facility would house a 700-plus indoor, Americans with Disabilities (ADA)-accessible self-storage rooms with climate-control options and high-tech security features, the release read.

“We’re going to continue bringing our customers trucks and trailers and the rentals. We’re also going to be offering (trailer) hitch installations for those that want a tow and maybe don’t have the accessory on their vehicle. We can help with that and be local,” she said.

Campbell said population growth in Eddy County indicated a need for a company like U-Haul in Carlsbad.

“Eddy County had the fastest growth rate according the 2020 Census at 15.8 percent in the State, so yes,” he said.

“We’re working with the city to improve residents’ quality of life through residential mobility and by meeting their storage needs.”

Herrera said U-Haul is an equipment share company and wanted a location in Carlsbad.

“We were finally able to make a move to get our foot in there and help our customers by being more convenient,” she said.

Herrera said ground could be broken sometime this year in anticipation of next year’s opening.

U-Haul planned to hire 15 employees for its Carlsbad location, the press release indicated.

Herrera said the number of employees could grow depending on feedback and service from Carlsbad customers.

U-Haul has moving and storage locations in Roswell and Hobbs, per the release and company website.