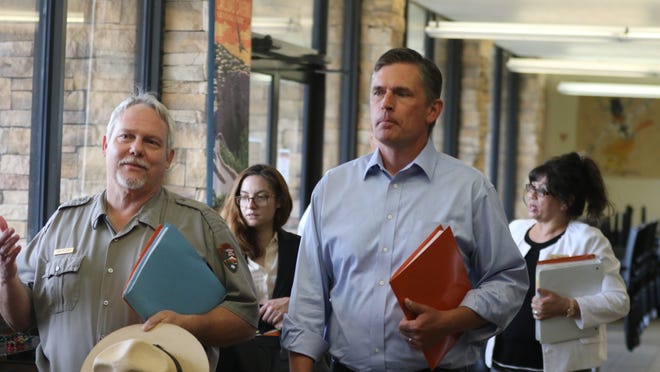 During his Tuesday visit, Heinrich toured the park and learned about work proposed and paid for under the Great American Outdoors Act, a bill Heinrich cosponsored which was passed by Congress last year and signed by former-President Donald Trump.

The Act unlocked federal funds from energy development for the National Park Service, providing up to $1.9 billion every year until 2025 to address deferred maintenance on national parks across the country.

At the Caverns, that means completing a rebuild of the secondary elevator system, which is ongoing, and updating and rehabilitating other infrastructure throughout the park.

Throughout the tour, Carlsbad Caverns Park Superintendent Doug Neighbor presented various aspects of the park to Heinrich, including the park’s air monitoring program and the needs of the underground trail.

He also pitched a collection of unfunded but necessary projects to promote safety and an improved experience for park visitors.

These included an $11.8 million project to upgrade utility infrastructure like fencing and power lines, another $225 million to rehabilitate 19 historic structures in the park and $28 million to rebuild the park’s underground trail system where visitors can see the world famous caves.

Heinrich was also briefed on the modernization project of the primary elevators which was completed last year and ongoing work to the park’s secondary elevators where structural steel is being replaced.

“It always really bothered me to come to the Caverns and see ancient, disrepaired elevators, to go to White Sands and see bathrooms over a sinkhole,” Heinrich said. “It took a lot of time to build up the capacity to do American Outdoors.

“There was really no big investment in our parks. My hope is that now we’ll have the capacity to really treat these places with the infrastructure they deserve and be able to catch up.” More money on the way for national parks

Deferred maintenance at the Caverns dates back about 50 years, and it has the largest backlog in New Mexico with work ranging from sewer and water upgrades to maintenance for park roads and trails.

Heinrich was optimistic that in the next five years as the Great American Outdoors Act is active, Carlsbad Caverns and other parks will see stronger infusions of funding than in previous decades.

“I just think other things were pressing at the time, probably,” he said. “We were just able to build a really strong coalition to see this is the time to fix this. You need to take those opportunities whenever they’re available.”

Conservation became key in Heinrich’s tenure in Congress, and he said it takes a balance between industries like oil and gas and stewardship of the most unique locales and natural resources across the U.S.

Heinrich helped push for permanent funding in the Land and Water Conservation Fund which earmarks federal dollars to public conservation projects, while also calling for increased development of hydrogen power in New Mexico and pushing major, utility scale wind and solar developments throughout the state.

Several conservation initiatives succeeded during the Trump administration, Heinrich said, despite what he called its “checkered” history on environmental issues.

This year, Neighbor said Carlsbad Caverns National Park received about $40 million in funds for maintenance, more than the $10 million to $15 million he said it was typically allocated.

Neighbor said he hoped Heinrich’s visit could help inform Congress on the unique needs of the park.

“Many times, there are lots of other perspectives out there. We’re here to speak for the resources,” he said. “Forty million dollars is a lot. We’ve got a lot going on. It’s one thing to hear about Carlsbad Caverns. Now, he (Heinrich) has a new understanding for how special Carlsbad Caverns is.”