An Air Force base in southern New Mexico claimed credit for a series of initially unexplained lights witnessed over Carlsbad this week, which drew several reports of an unidentified flying object (UFO).

The lights, which multiple Carlsbad residents said appeared in the sky at about 9 p.m. Monday during a lightning storm, moving strangely and seeming to multiply, lit up social media that night and the day after as users posted cellphone videos and speculated that cause of the illuminations.

Some users said at one point in the hour-long display, one of the lights erupted in flames and light, appearing to explode.

More:‘Blazing through the stars.’ UFO reported exploding over Carlsbad during storm

But Holloman Air Force Base spokesperson Denise Ottaviano explained the incident was likely F-16 jets from the base near Alamogordo flying over the area during a routine training mission.

She said the Talon Military Operations Area (MOA), which includes airspace in Carlsbad and the surrounding region, is frequently used during training missions.

Those involve the use of flares, Ottaviano said, that could explain the changing brightness of the lights.

Carlsbad residents can expect to see similar flares “a few times a week,” she said, as training schedules can vary and notifications to local communities are not sent out ahead of such a mission.

“It would appear that the lights in the videos are flares being dropped by F-16s from Holloman Air Force Base that were flying in that area on the night of Aug. 29,” Ottaviano said. “We routinely fly in the Talon Military Operations Area throughout southeastern N.M. as part of our regular training where citizens are likely to see our aircraft performing a variety of maneuvers and possibly the use of flares.”

The Talon MOA is a portion of national airspace in southeast New Mexico dedicated to F-16 fighter jet training.

More:UFO sightings date back to the first Americans. How does New Mexico stack up?

It was expanded by 93 percent in October 2021, after a decade of planning intended to improve opportunities for the 49th Wing, Ottaviano said, which produces more than a quarter of fighter pilots in the U.S. Air Force.

This wasn’t the first time the U.S. Military helped explain UFO sightings as part of its operations.

That kind of response dates back to 1947 in the infamous Roswell Incident where a rancher near the city said he found materials some said at the time could have been from an otherworldly aircraft.

The U.S. Army quickly responded that the material was part of balloon used in military research, but the event captured the imagination of the nation and continues to be discussed and theorized today.

The Roswell Incident happened in July of that year, per a report from the International UFO Museum and Research Center in Roswell, also during a thunder and lightning storm like the recent event in Carlsbad.

Rancher W.W. Mack Brazel discovered the debris on his ranch on the outskirts of the city, reporting his findings to the military.

A series of contradictory press releases ensued from the U.S. Army, per the report, first implying the debris was a “flying saucer” but later shifting to report it was a “weather balloon.”

“That was the start of the best known and documented UFO coverup,” read the report. “Once it became public, the event known as The Roswell Incident, the crash of an alleged flying saucer, the recovery of debris and bodies, and the ensuing coverup by the military were of such magnitude and so shrouded in mystery that 60 years later there are still more questions than answers.” 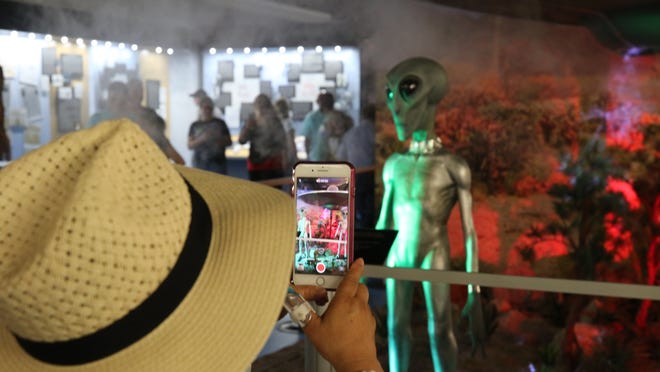 Duncan Gonzalez, 25, of Carlsbad still has questions himself.

He was one of the residents who said he witnessed the lights while stopped a truck stop on the southern edge of town.

Gonzalez said he’s gone back to that spot in the nights since and has seen what he was confident were jets.

Those flying objects were different than what Gonzalez said he saw Aug. 29.

“I didn’t see any jets or nothing,” he said of that evening. “There was nothing like that around. I’ve been going out there the past few nights and there’s a lot of jets flying around. I know what a jet looks like and what a something I can’t explain looks like.

“There’s something else to it.”