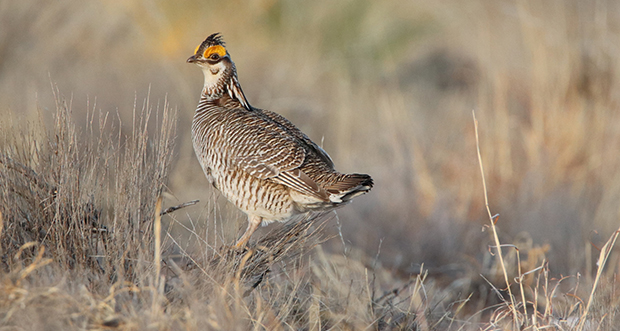 ALBUQUERQUE, N.M. – An environmental group is suing U.S. wildlife managers, saying they have failed to protect a rare grouse found in parts of the Midwest that include one of the country’s most prolific areas for oil and gas development.

A lawsuit filed Tuesday by the Center for Biological Diversity says the U.S. Fish and Wildlife Service is nearly five months late in releasing a final rule outlining protections for the lesser prairie chicken.

Once listed as a threatened species, the prairie chicken’s habitat spans parts of New Mexico, Colorado, Texas, Oklahoma and Kansas – including a portion of the oil-rich Permian Basin that straddles the New Mexico-Texas state line.

Environmentalists have been pushing to reinstate federal protections for years. They consider the species severely threatened, citing lost and fragmented habitat as the result of oil and gas development, livestock grazing, farming and the building of roads and power lines.

The Fish and Wildlife Service in 2021 proposed listing the southern population in New Mexico and the southern reaches of the Texas Panhandle as endangered and those birds in the northern part of the species’ range as threatened. The agency had a deadline of June 1.

“The oil and gas industry has fought for decades against safeguards for the lesser prairie chicken, and the Fish and Wildlife Service is late issuing its final rule,” said Michael Robinson, a senior conservation advocate with the environment group. “The agency has slow-walked every step, and these imperiled birds keep losing more habitat.”

The Fish and Wildlife Service on Tuesday cited its policy for not commenting on pending litigation.

The species was once thought to number in the millions. Now, surveys show, the five-year average population across the entire range hovers around 30,000 individual birds.

Landowners and the oil and gas industry say they have had success with voluntary conservation programs aimed at protecting habitat and boosting the bird’s numbers. The Western Association of Fish and Wildlife Agencies, which oversees the conservation effort, has yet to report the results of the 2022 survey done earlier this year.

With a listing under the Endangered Species Act, officials have said that landowners and oil companies already participating in the voluntary conservation programs wouldn’t be affected because they already are taking steps to protect habitat. However, a listing would prevent any activities that result in the loss or degradation of existing habitat.

The species’ regulatory history dates to an initial petition for protection in 1995.

A little smaller and lighter in color than the greater prairie chicken, the lesser prairie chicken is known for spring courtship rituals that include flamboyant dances by the males and a cacophony of clucking.