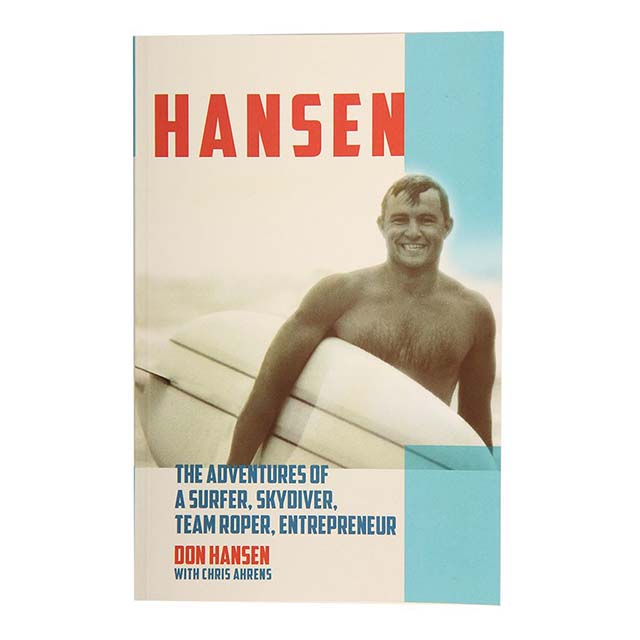 Coming into Encinitas on Coast Highway from the north you pass the Hansen Surfboards sign. There, frozen in time is a young surfer with a unique name, Cheer. In the off chance there is another surfer with the same first name, Critchlow is the last name. The image was recorded, as I understand it, in the late ’60s at Fletcher Cove by Tom Keck.

While it’s a mighty fine photo, it does not represent the life of Hansen’s founder, Don Hansen. No photo could. And that was the biggest challenge in co-authoring Hansen’s biography: There was no singular peak to work up to and slide down from.

That was also a problem for artist Wade Koniakowsky, who did the cover layout and needed four distinct images to begin telling the story. The images chosen are of Don and a friend skydiving while holding an Ocean Pacific Sunwear banner, Don skiing Powder, roping a steer and surfing tandem. Even that doesn’t tell the full story.

It all began in 1955 with the 19-year-old Redfield, South Dakota, local sticking his thumb in the breeze and waiting to begin his 1,600-mile ride to the Southern California coast.  Don left behind his life as high school football star, college student and mink trapper (how many mink trappers have you ever known?) and embarked upon his new life as a surfer.

Five years later, married with two children and one on the way, he was in Hawaii, riding some of the North Shore’s biggest waves that thundered through at Waimea Bay.

He was already a board builder by then and he rented the aforementioned Tom Keck’s garage to shape his big-wave guns.

A year later Hansen was back in California, building boards in Cardiff in a storefront now known as the Kraken. Once Hansen outgrew that facility in the late ’60s, it was off to his present location on 1105 Coast Highway 101.

From there he launched a solid retail business and, along with Jim Jenks and a few other friends, Ocean Pacific Sunwear.

While his surfing skills were declining at the time due to an increasingly large family and business demands, he nonetheless managed to take top honors in tandem at the U.S. Championships in Huntington Beach, two consecutive years.

But being an adrenaline-addicted Alpha male caused longings so deep that Don began skydiving, a sport he excelled in to the point of setting world records in an aerial competition called the “Ten Man Speed Star.”

After several thousand jumps, Don became somewhat numb to the thrill of falling toward earth at 120 miles per hour and began looking for other outlets.

One was ski racing, during which he shattered his previously broken leg while exceeding the freeway speed limit. Next it was team roping, charging out of a wooden chute on a horse and throwing a lasso around the neck of a steer.

These are a few of the bullet points in a life well lived. And while Don smiled and said, “I can’t tell you everything,” his great adventures are chronicled in “Hansen: The Adventures of a Surfer, Skydiver, Team Roper, Entrepreneur.”

The book is available through Hansen’s Surfboards or can be ordered through Hansen’s website at: hansensurf.com/products/hansen-book-hansen-the-adventures-of-a-surfer-skydiver-team-roper-entrepreneur

Stay tuned to this column for book signing dates.