Public officials have expressed concern about a migrant transition facility — presumably to process foreigners seeking asylum in the United States — that may open in Carlsbad.

Eddy County leadership announced on social media that they were informed of the facility on Saturday. The announcement states that the facility is a part of an agreement between the federal government and a private contractor and that the county had no involvement in it.

The City of Carlsbad hired Roswell attorney Richard Olson, who spoke at a City Council meeting on Tuesday. Olson said the current plans for the facility is to house families for up to 72 hours before being transferred to their host family or sponsor.

“No contract has been entered into by anybody,” Olsen said.

He said the City of Carlsbad received notice from Sen. Martin Heinrich’s (D-NM) office, but no decision has been made regarding possible location of DHS detention facilities.

“Sen. Heinrich’s office has also informed the City that as DHS moves through the process, they’ll brief the Congressional delegation, local and state governments and non-governmental organizations about the process and keep them in the loop,” he said.

Olson said he was contacted by City of Carlsbad administrators to assess input the City might have to influence the community if a facility was located in Carlsbad or Eddy County.

“I want to emphasize there was no contract and no decisions that have been made. There’s been no contact by the federal government of the City just the fact that the City has been informed by the owner of this facility that it is being looked at as a potential location for this migrant processing facility,” he said. 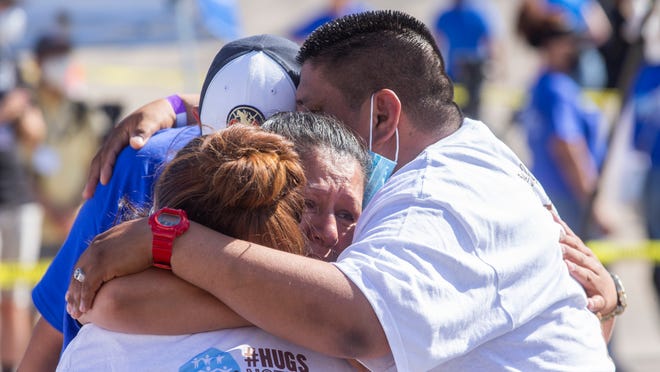 What are the processing procedures?

The Current-Argus asked Rebecca Sheff, senior staff attorney for the American Civil Liberties Union of New Mexico about the process. She said most migrant families do not stay in the same communities where they were processed.

“Technically for facilities like this one, those locations are not the families’ final destination,” Sheff said. “When they come to the border, when they’re processed into these facilities they typically have family or friends or networks of care elsewhere across the united states.”

Carlsbad Mayor Dale Janway said the contractor informed city officials once people were processed federal personnel would transport them to El Paso, Hobbs, or Roswell for an airplane flight to a host family or sponsor.

“We will continue to pursue answers to these and many other questions. We continue to encourage the federal government to communicate with and solicit feedback from Carlsbad and Eddy County residents,” Janway said.

Will ‘Remain in Mexico’ policy affect a possible center?

On Tuesday the Supreme Court ruled to reinstate the “remain in Mexico” policy. It is still unclear how this ruling will affect the expansion of migrant housing facilities.

The DHS announced that the department disagrees with the court’s decision but will comply with the order in good faith.

Who would be processed at the center?

Some of the citizens who spoke at the city hall meeting shared concerns about COVID-19 in housing facilities and how migrants can affect Eddy County’s already growing population.

Sheff told the Current-Argus that the DHS tests migrants for COVID-19 when they are taken into custody and has found they usually have the same or lower positivity rates as local residents. She said many facilities offer migrants the vaccine but the ACLU is still collecting data on how often that happens.

“DHS absolutely has the resources necessary to test migrant families for COVID when they are taken into custody,” Sheff said.

Sheff said these facilities do not house illegal or undocumented immigrants and are aimed at registering people into the asylum process.

“These are folks who are going through established processes to navigate the DHS system and the court system to access protection,” Sheff said. “From the limited information we have about this facility is it’s aimed at housing families, these are often families with young children and they are here because they are trying to access protection and the asylum system,” Sheff said.

According to the Migration Data Portal 41 percent of people immigrating to an OECD nation, like the United States, are traveling with or reuniting with their families and 40 percent of family migrants reside in the U.S.

“I hope that as we all get information on this facility there will be a better understanding in the community about who’s going to be there and for how long,” Sheff said.