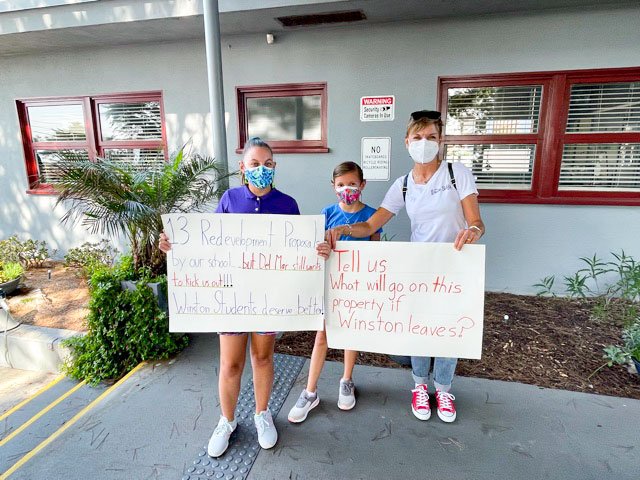 During a “Meet the Mayor” event Monday at ​​Del Mar Community Connections, families and advocates of the nonprofit school for children with learning disabilities showed up with signs to protest the city’s decision.

Signs during the protest asked what the city plans to do with the site of the school after the term of the lease ends in 2023. Another sign read, “Shame on you, Mayor Terry Gaasterland.”

The city decided to terminate the lease of the school, which serves students from across the county with special needs, last month after a prolonged dispute with a part of the lease which required the school to submit plans for remodels.

The school said the city moved the goalposts on multiple occasions and has ignored a clause in the lease that gives them protection during a pandemic.

In a statement following the termination of the lease, Gaasterland defended the action by saying it was the duty of the council.

“I have long-valued, as an educator and as the aunt of a special needs child, what Winston does, and that makes being a landlord in this situation excruciating,” said Gaasterland. “But we have to do what is right for the city and that’s to be responsible landlords.”

Dr. Dena Harris, head of school for The Winston School, told The Coast News that the school’s architectural and construction partners have told them the way the city handled their case was unusual.

“They are elite professionals and even they have said this is highly irregular. What they’ve asked for has never been required in a redevelopment that they’ve done,” Harris said.

Harris, who is still on medical leave from the school as she deals with breast cancer treatment, says she feels the values of the city are misaligned.

Echoing Mayor Gaasterland’s statement in which she said she is the aunt of a special needs child, Deputy Mayor Dwight Worden also said during the special meeting where the council terminated the school’s lease that he has children with special needs.

Harris thinks those comments are hollow next to the council’s actions.

The City of Del Mar is hard-pressed to find areas to allocate for low-income housing as required by the state department of Housing and Community Development.

As part of the city’s most recent housing cycle, Del Mar officials are holding out hope they will be able to come to an agreement to build housing on the state-operated Del Mar Fairgrounds property to keep housing from being built on the Del Mar bluffs.

Harris and The Winston School question whether or not the city was aggressive with them to use the property to fulfill their need for housing.

“They all have a common goal. And the common goal is we want the school out of her so we can have the property,” Harris said.

Harris says the school was guaranteed a permanent home after it helped to fundraise to purchase the property from the Del Mar Union School District in 2008 and they will continue to fight to stay where they are.

“We’re not going anywhere,” Harris said. “Never give up is really our motto.”