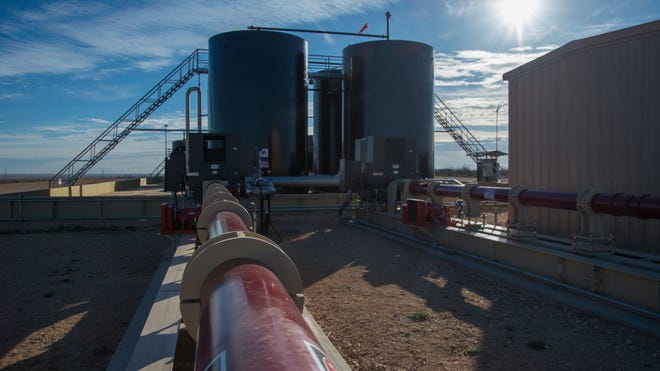 Every day, oil and gas drilling in New Mexico produces 3.5 million barrels of byproduct water, brought up from the same shale formations as fossil fuels.

Known by the industry as “produced water,” the water is high in salt, and could contain dangerous chemicals toxic to humans.

For every barrel of oil, between four and 11 barrels of this produced water could be generated.

And as fracking boomed in southeast New Mexico’s Permian Basin, it drew concerns that the state’s scarce water resources could be sacrificed for the profits of its largest industry.

“Not only does the oil and gas industry drive climate disruption, but it consumes billions of gallons of New Mexico’s precious fresh water every year in the fracking process and literally converts it into a toxic liquid waste that requires disposal,” said Camilla Feibelman, executive director of the Rio Grande Chapter of the Sierra Club.

She testified before the New Mexico Legislature’s Radioactive and Toxic Waste Committee during a Wednesday meeting at New Mexico State University Carlsbad that not enough was known about the content of produced water.

Feibelman worried the water when brought to the surface during oil and gas operations could contain radioactive materials, heavy metals, and other pollutants.

“There are huge gaps in the scientific understanding of the toxicity and risks associated with safe use of produced water outside oil field operations,” she said. “Our lands and waters are at risk.”

To mitigate the byproduct’s impact on the environment and human safety, New Mexico’s Oil Conservation Division (OCD) regulates produced water within the oil and gas industry while the New Mexico Environment Department is tasked with managing any use outside of the industry.

About half of it the water reused for oil recovery through hydraulic fracturing, records show, and about 40 percent is injected for disposal back underground.

Another 10 percent is recycled for reuse within the industry.

To better understand and study produced water, the OCD recently developed new rules requiring oil and gas companies to report the content and quantity of produced generated during extraction.

“Before this reporting rule we didn’t have any data as to the types of water that we’re seeing,” she said.  “Now we know what types and how much of each type of water is being produced.”

More:New Mexico hopes for oil and gas windfall as nation recovers from COVID-19

Since October 2020, the OCD reported 408 wells were hydraulically fractured, with each frack requiring about 377,000 barrels of water.

A barrel is about 42 gallons.

Can oil and gas wastewater work outside the oilfield?

Bruce Baizel, legal director at the New Mexico Environment Department (NMED) said the Department has yet to develop rules for use of produced water outside of the oil and gas industry.

He said the Produced Water Act passed in 2019 specified NMED and the OCD’s authority in regulating the water but was contentious amid concerns of the contents of produced water and if it could be safely used outside of oil and gas industry.

Before the Committee, Baizel said work had continued with New Mexico’s Produced Water Consortium, a joint effort between the NMED and New Mexico State University seeking to develop technologies and regulations to use the water in sectors aside from the oilfield.

He said the Consortium planned to hire additional staff to ramp up the research was expected to publish its findings and recommendations in 2022.

Consortium Director Michael Hightower said since the group was formed, other states have sought similar rulemakings and to find ways to reuse produced water.

“What we’re seeing is that rulemaking has actually picked up in a lot of other oil and gas producing states,” Hightower said. “If you look at the State of New Mexico we’re kind of a leader in this. A lot of that is because of issues associated with aridity and drought.”

He said the cost of disposal of produced water is higher than treating the water, a reversal of the value of recycling from 20 years ago.

“The question is can we do that safely,” Hightower said. “That’s really what the consortium is focused on. All industries need water. To provide another source of water is a good thing, and also to protect human health and the environment.”

Mathias Sayers, vice president of legal at NGL Energy Partners said the New Mexico-based water midstream company, like many in the sector, has shifted away from down-hole disposal injection toward treating and recycling the byproduct.

“While it was just produced water disposal in the past, now it’s produced water management,” he said. “There are many more paths for it than down-hole.”

He said many energy companies send their produced water to companies like NGL to be treated and used in subsequent well completions.

He said produced water management could also bring economic growth to New Mexico, generating jobs and supporting other industries that could struggle for water access in the drought-prone state.

“There is no produced water out of the oilfield in New Mexico,” Sayers said. “Why would we look at investing in finding new ways to use produced water? I think we all know it’s because New Mexico is the only state in the Union facing extreme water stress.”

New Mexico Sen. Gay Kernan (R-42) of Hobbs said more management of produced was supported by oil and gas companies and could provide a financial boon to the industry.

“I think it’s really great that we’re doing this and see that there’s been some collaboration with New Mexico State,” she said. “I think this is supported by the industry because it adds value to produced water.”

She said freshwater would always be needed for drilling through freshwater zones to avoid any contamination.

“If we took away the ability to use freshwater to drill, we wouldn’t be able to drill any other wells at all,” Kernan said.