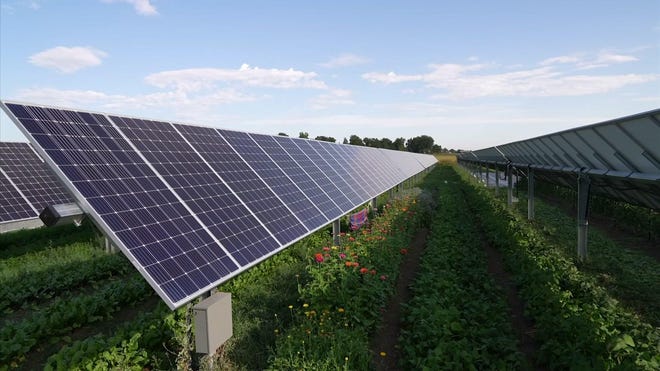 An electrical transmission line connecting Eddy and Lea counties was completed as Xcel Energy continued efforts to increase power infrastructure in southeast New Mexico to adapt to increased demand in the growing area.

Booming oil and gas production and operations in the Permian Basin area, and the subsequent population increase brought on by economic growth were chief factors in the need for a larger power grid, said David Hudson, president of Xcel’s Texas and New Mexico operations.

The 345-kilovolt line will connect Xcel’s China Draw Substation about 22 miles south of Carlsbad to its Roadrunner Station 23 miles northwest of Jal.

More:Bad Energy: The Energy Transition Act was supposed to get New Mexico away from coal

Xcel also built its Phantom Substation at the midpoint of the line, which completed a loop between the two counties aimed at increasing regional carry capacity for power fed by a main line from Texas.

The project was part of Xcel’s greater Power for the Plains grid expansion which began in 2011 to increase power deliveries in the region.

The China Draw-Roadrunner line joined two lines completed in 2018: a 40-mile segment between the Kiowa Station northeast of Carlsbad and the Roadrunner Station completed, and a 90-mile line that connected the Hobbs area to Kiowa and down to China Draw.

Hudson said the project’s progress would help meet the rising demands as Eddy and Lea counties were two of the fastest growing in New Mexico.

The 2020 U.S. Census showed Eddy County’s population grew by 15.8 percent in the last decade and Lea grew by 15 percent, compared with New Mexico’s overall population growth of 2.8 percent during that same time.

“Over the past 15 years we’ve seen phenomenal economic growth in southeast New Mexico, especially in Lea and Eddy counties,” Hudson said. “To ensure our customers have the necessary capacity to power that growth, we have invested hundreds of millions of dollars in upgraded and new lines and substations across this area.

“And in some places, we have built lines where there was virtually no infrastructure at all.”

In total, Power for the Plains saw Xcel building 1,300 miles of new transmission lines between New Mexico, Texas and Oklahoma, planning on 200 more miles constructed through 2021.

During the project’s 10 years, 75 substations were upgraded and another 11 were slated to be built this year.

In total, the company invested about $3 billion in the project.

The work was completed through collaborations with communities served by the projects, Hudson said, hiring workers workers and purchasing needed goods locally.

“These lines and substations have been a vital part of New Mexico’s economic and job creation success, and a key component in the state of New Mexico’s tax revenues. We’re proud of the many employees who have accomplished so much in a short amount of time to make it happen,” he said.

“But it wouldn’t have been possible without the support and cooperation of our community partners who understand the importance of a robust power grid that is capable of powering growth for years to come.”

More:Renewable energy policy being revised by feds as sector grows in New Mexico

A report from the Energy Information Administration showed that power demand in New Mexico was led by industrial operations like oil and gas drilling mostly centered in southeast New Mexico’s Permian Basin.

The state’s industrial sector accounted for about 37 percent of the state’s electricity retail sales, per the report – the largest of any sector – followed by the commercial sector at 35 percent.

Xcel’s plan was in response to the Southwest Power Pool’s 2014 High Priority Incremental Load Study (HPILS) which identified southeast New Mexico and West Texas as an area in needed of augmented power supplies in the years following the study, calling for $557 million in added high-voltage infrastructure in the area.

The study pointed to increased oil and gas development in the Permian Basin region as a direct cause of uncertainty for meeting power demands, warranting additional research and projects to ensure reliable power.

“In April 2013 , the SPP Board of Directors directed this study be performed in response to concerns about oil and gas shale play developments, and other future load additions in the region that had not been accounted for in previous planning efforts or in models being used in planning efforts underway at the time,” the report read.

“The main driver for the HPILS was the increase in load forecasts associated with oil/gas shale plays and other development.”