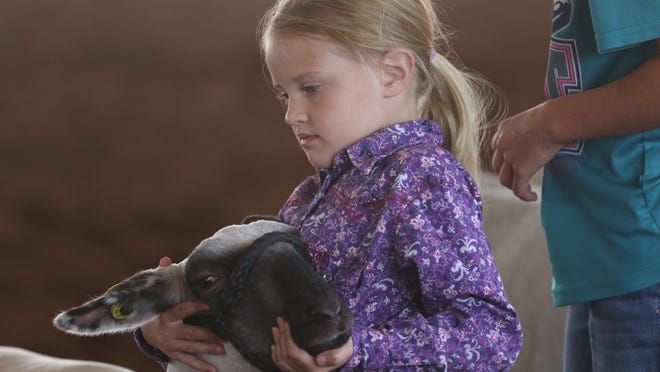 His family took part in the Eddy County Fair for generations, showing sheep, goats, lambs, cows and the other animals used in the annual competition held in Artesia.

On Thursday, Crook of Artesia was christened the winner of the booster lamb show, beating out numerous other youngsters to win a ribbon and dollar bill.

The booster shows, which are held for multiple animals, see the stock provided to the children that then walk them into the pen to be judged on posture and showmanship.

It’ the first taste of competition for young children, many who will go on to compete through high school.

Crook’s mother Jodi Crook said the shows teach children to be competitive but also responsible as they raise their animals for months ahead of the summer event.

Her two other children, one in college and the other just recently aging out of the fair at 19, both learned a lot from the event and gave Crook confidence they could move into adulthood successfully.

“Letting them go, I feel better knowing they were taught responsibility,” she said. “This is our family. It’s just what we do.”

While her son recently started playing sports, Crook said the fair will always be his first competition.

She said TJ began attending the livestock show as a baby and that her husband’s family was involved for generations.

“He’s been out here since he was born,” Jodi Crook said. “He’s shown some interest in sports, but he loves this.”

Jodi stood with 19-year-old Alexis Benton who competed in the livestock show for 10 years, taking the title of Fair Queen in 2018.

This was her first year of non-competition, but Benton was as present as ever.

She helped young up-and-comers with their animals, keeping watch over the children and ensuring they all received the same lessons of disciple and humbleness Benton learned throughout her childhood.

“It teaches you work ethic,” she said. “It teaches you to be humble. When you don’t win, you’re more determined. Now, I feel like I’m able to help more. They have to learn somewhere.”

Benton said she’d spend about 10 hours a day for months in preparation for the fair.

Throughout her career she raised lambs, goats, horses and rabbits, and competed in the rodeo.

But her real goal is to work in the equine industry with horses.

That’s not just because of the beauty and grace of the animals. Benton said one of the best parts of the fair is the people.

The parents and children raising animals, the judges and fair staff and even the elders of the area who came out every year for decades created a close-knit group of locals that look out for each other, she said, and ensure important lessons are passed down.

“The community is supportive,” Benton said. “They all want to work together. You have people that will jump in and help you.”

And even though most of the competitors don’t go on to be farmers or ranchers or raise livestock as their career, what they learn through the competition informs their values throughout adulthood.

“They learn how to win. They learn how to lose and get back up and try again,” she said “They get a competitive edge. Most of them don’t grow up to be farmers. They just learn a lot of responsibility.

“My kids knew first thing to do when they get up is to have breakfast and then go out to the pen.”